A local newspaper of the day told the tale:

March 19, 1945, Pacific Ocean—Donald C. McLaughlin, Jr. of Vinalhaven is a seaman first class aboard the USS Franklin, also known as “Big Ben.” Operating 60 miles off the coast of Japan, the Franklin sits vulnerable, with many of her planes on deck—loaded with bombs, rockets and machine-gun ammunition—prepared for take off.

At this moment, a Japanese dive-bomber streaks down out of the clouds and releases two 500-pound bombs. Within a minute the bombs start a succession of fires and explosions that sear and shatter the carrier’s frame for hours afterward. Resulting fires are fed by thousands of gallons of gasoline.

With over 1,000 shipmates killed, missing or wounded, those who are left, including McLaughlin, outfight the fires, patch up the damage and sail the 27,000-ton ship 12,000 miles back home. The ship that the Japanese boasted they had sunk is now safely back in New York, and this becomes one of the most dramatic sea stories of World War II.

Don McLaughlin and all the other World War II veterans from Vinalhaven will soon have a new memorial in their honor. Building a World War II memorial is a project that had been on the minds of several islanders for some time. According to American Legion Post 18 member and Air Force veteran Alan Barker, there was a group that was looking for something to put their energy into, so “Last spring we decided to pursue it more energetically.”

The memorial will be built in P. Evert Magnuson Square, on the corner of Main Street and High Street, and will consist of several granite slabs or panels, each sitting on a granite pedestal and arranged in a semi-circle facing Main Street. Over 240 World War II veterans will be named on the panels. Granite for the panels will be of a fine grey variety, and the pedestals will be of a pink variety.

The flagpole currently sitting in the square will be moved to the center of the semi-circle and the current World War I and World War II marker will be moved adjacent to Main Street. Long-time summer visitor Susan Rodriguez designed the memorial and helped with paperwork necessary to get the project underway. Rodriguez is a founding partner and design principal of Ennead Architects of New York. Jarod Pelletier, also of Ennead Architects, is assisting Rodriguez. Organizers hope to break ground this spring with at least some of the panels installed later in the summer.

When the work began in earnest, organizers figured they would need $26,000 for the project. All the funds were raised in an aggressive campaign last summer under the guidance of Jeannie Conway. In total, $30,000 was raised in about three months, more than needed. In light of this, it was decided to include veterans of other wars in the memorial. It is hoped that eventually all veterans from World War II forward will be honored here. To do so, fundraising must continue.

Conway has a rummage sale planned for the Fourth of July and a gun raffle for later in the summer. Help also is needed identifying Vinalhaven veterans of other wars, as neither the town nor the American Legion post has a comprehensive list of veterans after World War II. Islanders and others with Vinalhaven roots are asked to comb their family archives to find and share names of islanders who served in the military.

In order to keep the project manageable, “We’re going to concentrate on World War II first, then go on to the other wars,” said organizer and Korean War veteran Clarence Conway. Time is of the essence for this phase of the project.

“I think it’s quite an honor to have this built now,” said Herb Conway. “I appreciate it. I have to give my brother a big pat on the back.” However, said Conway, “It’s too bad a lot of the other boys aren’t around to see it.”

P. Evert Magnuson Square was previously the site of a World War II honor roll made of wood. That was removed in 1963 and replaced with a granite marker memorializing veterans of World War I and World War II.

Donations for the memorial and information about local veterans who should be included in the memorial may be sent to American Legion Post 18, PO Box 91, Vinalhaven, ME 04863. 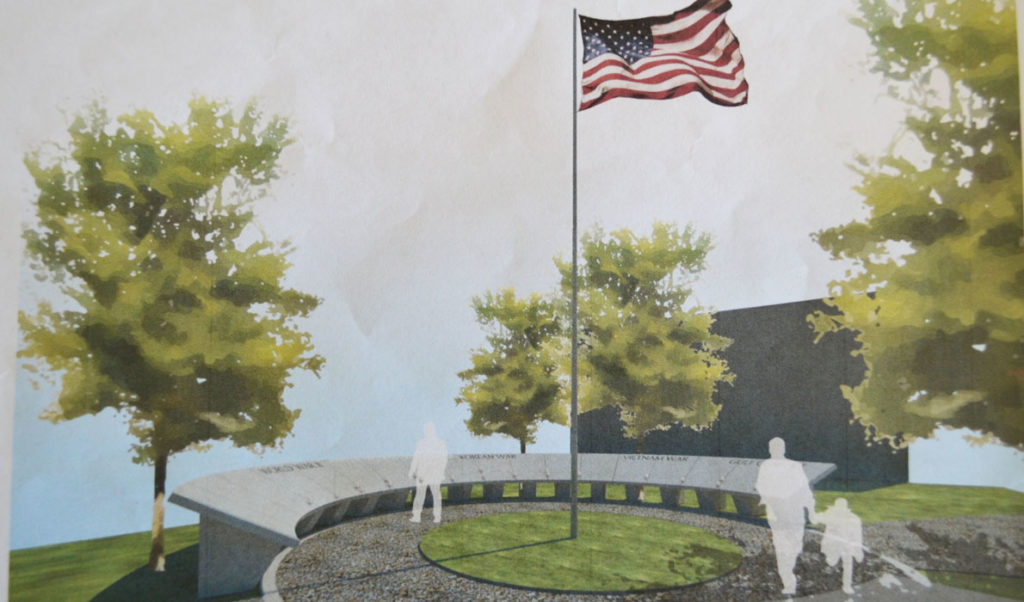