This political season is once again illuminating the ongoing struggle to define who we are as a country. One pointed aspect of this debate involves immigration and it is as relevant in Maine as anywhere else in the country.

We are agonizing over the appropriate treatment of U.S. immigrants, while often forgetting that the vast majority of us have no native claim to this place. Life north of the border taught me a new way to think about immigration.

I lived for three years in Canada. Life there was a familiar, yet culturally distinct experience, and my lens for seeing what made Canada so different came from teaching cultural anthropology at York University in Toronto.

My idea of fun back then was to ask students to define what is unique about Canadian identity. “What makes you Canadian?” I would ask, and then add: “’Not being American’ is an unacceptable answer.”

It was often a difficult discussion because in many cases, Canadian identity is simply characterized as “not American.” Those who have backpacked around the world will find Canadians proudly displaying their flag. One reason they do so is to not be confused with Americans. Canadians are quick to point out they have witnessed Americans using the Canadian flag as a form of protection against the retributions that Americans can experience when traveling in countries where U.S. action has hurt people.

In the classroom, the question of Canadian identity would at first open up discussions of great Canadian actors or musicians. What made them great? Well, they often said, because they succeeded in U.S. entertainment markets. Of course, the fact that Canadians consider who is or is not a great actor because they succeed in the U.S. only served to reinforce the problematic idea of using the U.S. as a reference point for defining the Canadian identity. (Speaking of celebrity: I wonder how folks in Canada are feeling about Canadian-born Sen. Ted Cruz these days.)

Most of the time, I was at the head of a classroom where the majority of students were first generation immigrants to Canada. You name the crisis zone in the world and a student in the room could speak first-hand about the atrocities witnessed at the hands of governments battling over control of natural resources or belief systems.

The discussion would eventually turn to what allowed each immigrant to be in the room at all. The ideas that would emerge taught me a lot about how different the U.S. can be from Canada.

The students would talk about how Canada’s immigration policies allow one to retain the culture of the place you left. In Canada, they often refer to their immigration policy as a “cultural mosaic.” It is based on the idea of multiculturalism—the promotion and acceptance of multiple cultural traditions within one political entity. In Canada, people are encouraged to keep the languages, identities and values of the places they lived before arriving in Canada.

The cultural mosaic policy stands in sharp contrast to the U.S. melting pot. The melting pot is based on the concept of assimilation, a process through which different cultures become more alike over time. In other words, leave your old identity, your beliefs, languages and traditions at the border and become something called American. This ideal isn’t working very well for us these days. In grossly general terms, after generations of assimilation, many folks don’t want to let new people with different cultures move in.

The mosaic symbolizes openness to difference, to new ways of living. I am not suggesting it is easy or that it takes place without conflict. It is part of the constant struggle that Canadians have as they define who they are becoming. However, the election of Justin Trudeau as prime minister, whose campaign prioritized inclusiveness, is a clear signal that the cultural mosaic is alive and well.

Meanwhile, in the U.S. we continue to struggle with the role that immigration plays in who we are becoming as a country. In a place like Maine, where we need people to work, to build an economy, to participate in our community institutions, we ought to reject the isolationism that is being touted by some nationally and instead build on the idea of the cultural mosaic. By adopting this type of thinking here in Maine, we would send a strong signal of who we are, of inclusiveness, of our intention to thrive.

And I’ll leave a discussion about the high quality and affordable health care my wife and I received while in Canada for another time. 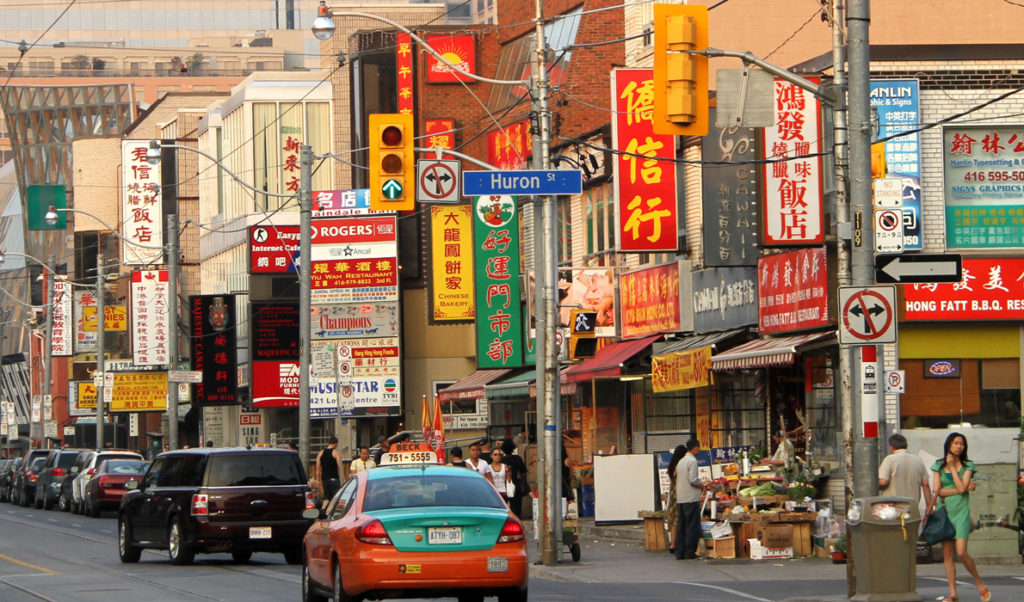 A street scene in Toronto's Chinatown.