There is a side to island life that might be eclipsed by fishermen’s working lobster boats and pickup trucks, and tourists walking off ferries.

Art and literature are alive and well in island communities, and the Maine Seacoast Mission believes they are worth celebrating and sharing. To that end, the Mission for the last ten years has published The Island Reader, a collection of art, photography, poetry, short stories, essays, memoirs and even drama.

The tenth edition will be circulating on islands by late June, says Gary Rainford, the publication’s editor and a Swan’s Island resident.

This edition has a broader geographic reach, he says.

In the past, most of the submissions came from the islands in Hancock County—Swan’s, the Cranberrys, Isle au Haut. “Every once in a while we’d get something from Vinalhaven,” he said. With this edition, that changed.

“We received submissions from close to 90 people from 11 islands, from Great Cranberry Island to Cliff Island,” Rainford said.

Rainford, himself a poet who teaches English and philosophy at Monroe Community College in Rochester, N.Y., began editing the journal as a volunteer.

“I’ve been involved since volume three,” he said.

Having moved to Swan’s Island in 2001, he has come to love his fellow islanders, but has little in common with the fishing economy and other parts of island life. The art and writing some of his neighbors produce is a way for him to connect with them.

“I love language and art and I love that this brings us together,” Rainford said.

Douglas Cornman of the Maine Seacoast Mission says this is why the Bar Harbor-based nonprofit underwrites the publication through its island outreach program.

“We’ve always strived to provide islanders with access to those things which are inaccessible due to living on a remote, and often isolated, island,” he said. “The Island Reader represents yet another way of providing access; in this case, access to expression and shared experience.”

Sharing experiences through the arts promotes a sense of island community, Cornman noted, while also offering “a glimpse of this unique experience with those on the mainland.”

Last year, with a change in personnel at the Mission, producing the The Island Reader became problematic, so a “9.5 version,” as Rainford calls it, was created, gathering some of the best of previous editions. He was hired to produce that version, and to continue with the 2016 edition.

“This is our tenth edition,” he said. Rainford is joined on the project bye six co-editors: Kendra Chubbuck from Isle au Haut; Ingrid Gaither from Great Cranberry; Ann Marie Maguire from Swan’s Island; Toby Martin from Islesboro; Sally Rowan from Islesford and the Mission’s Cornman, who lives on Mount Desert Island

Separate email accounts were created to receive poems, essays, art, photography, etc., and the group gathered on an overnight “editor cruise” aboard the Mission’s Sunbeam V to sift through and choose selections from a total of 500 submissions (some people submit several poems or photographs).

Five hundred copies of The Island Reader will be printed, and this year, for the first time, the 85-page book will be sold for $6 at island hubs, such as libraries, community centers and general stores.

“This is my first experience doing any kind of editing, publishing, and lay-out,” Rainford said, but it’s clear he enjoys the work.

This year’s cover art was created by graduating Islesboro high school student Cheyenne Houle, a case in point for the opportunity The Island Reader offers for creative types of all ages, Rainford said.

A public launch party is planned for July 15 in Northeast Harbor where Sunbeam V is docked.

A poem featured in the 2016 edition of The Island Reader by Susan Valdina of Islesford:

The winds will be northwest

Freezing spray will coat the boat

The horse turns his tail and stays the day

The cold brings extra thirst and I

Fill the dishes for birds cats and dogs

Then I cut wood and feed the fire

By evening I hear the weather report

As if I needed to know what my day held

I fill my cup turn in and stay the night 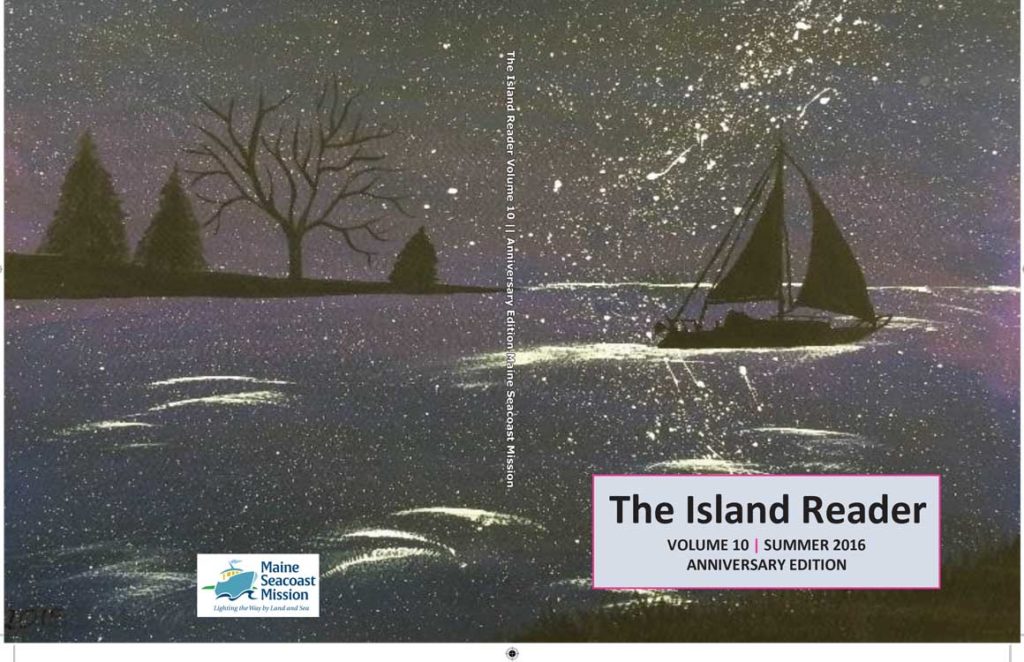 The cover art for the 2016 edition of The Island Reader was created by Islesboro student Cheyenne Houle.