It may have been lost in the news of the high volume and high value of the 2014 lobster catch, but it’s worth noting: Stonington was once again the top grossing lobster port in the state.

The Island Ad-Vantages newspaper reports that in the $457 million value statewide, Stonington fishermen landed a catch worth $57 million. In second place for pounds and value was Vinalhaven ($34 million), Beals in third place at almost $21 million, followed by Spruce Head and Friendship, the paper reported.

More news out of Stonington by way of the Island Ad-Vantages: a new cell phone tower is planned that would provide better service downtown, but a push is needed to get service providers to install their equipment on it.

Verizon, AT&T and US Cellular have been contacted by town officials, “but only AT&T has indicated that it will install its equipment on the tower once it is built,” according to the story. Customers of the other two carriers are encouraged to push them to install their equipment.

Liquefied natural gas, or LNG, is a term with which residents of eastern Washington County are very familiar. Terminals to import the fuel were first proposed for the region 12 years ago, but to date, nothing has been built. The projects have polarized residents, with opponents arguing the terminals will spoil the scenic quality and pose environmental and human health threats, while proponents hope the construction and operation will provide a much-needed injection of money and jobs.

It’s been quiet on the LNG front for years, but in late March, one of the companies, Downeast LNG, announced its plans for a terminal on the western shore of Passamaquoddy Bay will include import and export capabilities, the Bangor Daily News reports.

Other news from Washington County, via the Quoddy Tides newspaper: “The officer in charge of the 87-foot coastal patrol boat Moray, based at U.S. Coast Guard Station Jonesport, has been relieved of his duties.” The reason cited by Coast Guard officials, according to the story, was “a loss of confidence in his ability to command.”

In Jonesboro, the town just north of Jonesport, the Quoddy Tides reports, a park is planned for the site of the former Schoppee’s Garage on Route 1.

“The familiar landmark, once a thriving gasoline station and service garage, operated from the 1930s to 1998,” the paper noted. The site is adjacent to the Chandler River, and given that the building was in danger of collapsing and causing environmental problems, Washington County Manager Betsy Fitzgerald asked the county council of governments to get involved five years ago.

The owner of the land, Bessie Schoppee, agreed to donate the property, the paper reports.

A farmers market, picnic area and scenic turnout are planned.

Portland’s Unum, the large national insurance company, has installed four electric vehicle charging stations at its office on outer Congress Street, the Forecaster newspapers reported. The stations are for use by company employees.

“Unum is moving toward more sustainable practices across the board,” the paper reports, citing statements from a spokesman at the company’s Chattanooga, Tenn. headquarters.

The 2.9 acre Crow Island in South Bristol has been purchased for conservation by the Damariscotta River Association, the Lincoln County News reports. Plans also include allowing public access and protecting island habitat.

But a $75,000 grant for the purchase, approved by the Land for Maine’s Future (LMF) board last summer, is being held up by Gov. Paul LePage, the paper reports. LMF has $2.2 million in cash “and another $11.47 million in yet-to-be-sold bonds,” according to the river association’s director, Steven Hufnagel.

“Roughly three-fifths of voters approved LMF bonds in 2010 and 2012,” the paper reports, but LePage has refused to sign-off on selling the bonds, nor has he allowed LMF to use its cash, the paper says.

Older sewer pipes in our coastal towns, some installed in the late 19th century, threaten the health of our bays and rivers. The older, ceramic pipes invariably have cracks that allow the infiltration of groundwater, which in turn overwhelms sewer treatment plants, resulting in the discharge of untreated sewerage.

Replacing pipes is costly, because it usually involves digging up streets.

But in York, a technology used in Europe will help replace pipes at a much lower cost.

The York County Coast Star reports that a company is using “cured in place” piping, relying on a reinforced fiberglass and resin system installed within the existing pipe.

“It is then inflated, and an ultraviolet light is used to activate and cure the new pipe, which will take fewer than 20 minutes,” the paper reports.

Lastly, from the Boothbay Register, a letter to the editor that will be of interest to someone: “We recently acquired four varnished, mahogany stern boards for a boat named Smarto. Below the name, the home port of Boothbay Harbor, Maine is lettered in faded gold leaf. The boat would have been nearly 8-feet wide at the stern. We wonder if anyone has knowledge of this boat and its prior ownership. Call 633-4479 if you have an answer for us. –Charlie Birlem, Boothbay.” 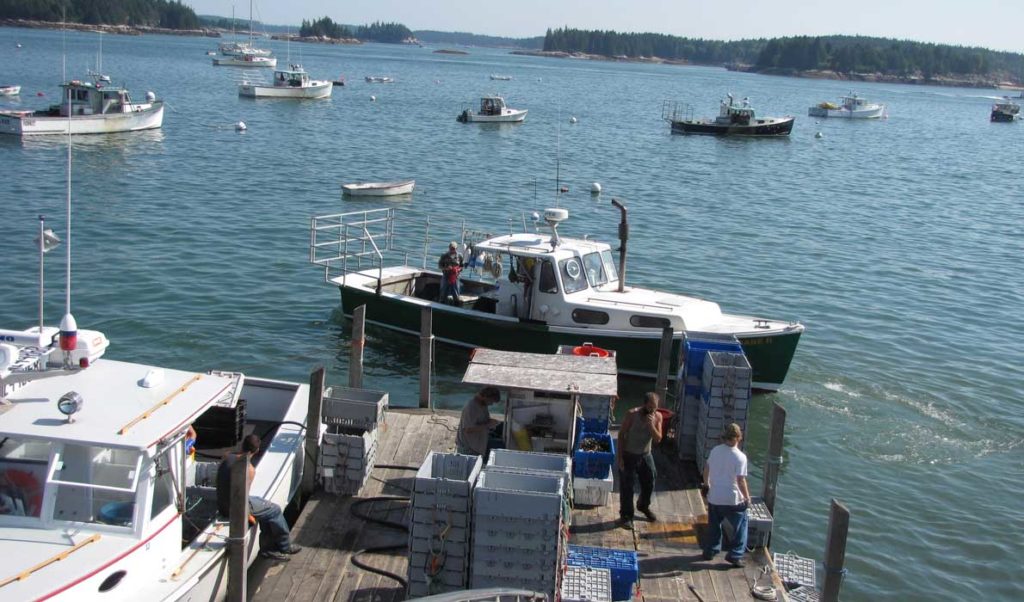 Fishermen unload their catch at one of Stonington's buying stations last September.

Maine—as it should be, as it is