The Island Institute launched this newspaper over 20 years ago in part to highlight the importance of Maine’s working waterfronts. Those properties, from which marine harvesting and other water-dependent businesses operate, were suddenly threatened by commercial and residential development. The most visible example of that threat came when condominiums were built on one of Portland’s fish piers.

That access helps the waterfront work, if you will. It generates economic activity. After all, hotel rooms with water views go for more money that those with street views.

A story has been unfolding in Belfast that illustrates this new working-waterfront dynamic. Over the last decade or so, the former Stinson sardine canning plant drew interested buyers, but only one came through with the money and a viable redevelopment plan.

Front Street Shipyard, a high-end yacht and commercial boat service company (which is now getting into boatbuilding in a big way), has sprawled across the former Stinson property and more. Last month, the company closed on the purchase of a city parking lot to accommodate its growth.

But it hasn’t been a one-way deal. The company allowed a long-planned waterfront walkway to wind through its yard. That walkway has become wildly popular among locals and tourists.

Concurrently, the city had been planning a walkway to continue away from the developed waterfront along a former railroad bed. That 2.2-mile walkway, which follows the Passagassawakeag River, is largely complete. The plan always has been to link the two walkways.

But there’s one problem: they are separated by a 700-foot strip of land owned by Penobscot McCrum, a potato-processing company. The business has not agreed to allow an easement across its property, the Belfast Republican Journal reports, and stopped negotiating with the city for an easement (the city offered $55,000 for public use of a 14-foot wide strip).

Now, the city council has begun eminent domain proceedings to seize the easement.

It’s an odd, unfortunate twist in what has been a success story. A private business certainly can refuse to sell an easement, but Penobscot McCrum’s position on the matter illustrates what may become a common conflict. The plant was built in the 1940s as a poultry processing facility. Back then, waste—as in chicken entrails—were dumped directly into the harbor, so in that sense, the business depended on the waterfront location.

But now, the business has no need to be on the waterfront. In fact, city officials quietly tried to entice the company to move to an industrial/business park, but Penobscot McCrum has shown no interest in doing so. If the plant were seeking to open on the waterfront today, it would be denied by current zoning.

The conflict with McCrum is “a huge deal,” says Mike Hurley, a Belfast city councilor who has worked for years to create the walkways. “It really speaks to every working waterfront, not only in Maine, but around the world.” He notes that cities such as Baltimore, New York, Miami and Boston all have built similar waterfront walkways.

“There had to have been, in those places, a reckoning. They all were privately owned,” Hurley says. Nearby Bucksport created its walkway along the Penobscot River from 38 piece of privately owned property, and did so without using eminent domain, he adds.

That reckoning, as Hurley calls it, will continue along the coast. Tools like contract zoning, where applicants negotiate with municipalities before winning approval, will help ease the conflict. But as former industrial waterfronts transform into other uses, the public will not be denied access in the new landscape. Nor should it be. 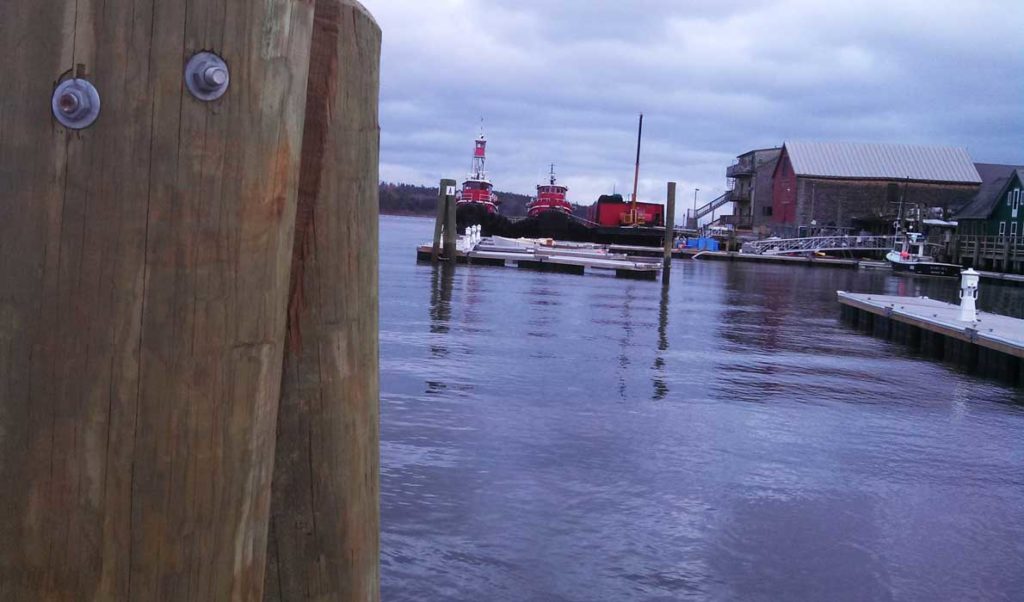 A view of Belfast's tug boats from the harbor walkway.