Like many of us, I learned in school about the trade triangle based on the shipping of enslaved people from Africa to the West Indies—rum, sugar, and salt going from the West Indies to North America and Europe, and luxury goods, tools, and household items carried to white plantation owners, government officials, and their families.

I’d known that salt cod from New England and the Maritimes was part of that trade as the major food fed to West Indian slaves, but I didn’t realize how key Newfoundland was. For example, 176,000 quintals (over 38 million pounds) were shipped from the island to the British West Indies in 1816. Once sealed into the barrel, salt cod was slow to rot and could withstand the tropical heat better than other foodstuffs.

In the process of writing Elemental: A Miscellany of Salt Cod and Islands, based on my travels and research to Newfoundland and the Western Isles of Scotland, I became more aware of the back-breaking work, of not only catching the fish in the cold, rough waters of the North Atlantic but also the heavy labor of “makin’ the fish” on the rocky Newfoundland shore, which continued into the 20th century.

The beach work was done by the women of the community, whose skill in the proper salting and drying of the filleted fish was crucial. As one woman said, “Everybody was after number one fish—you’d get more for making number one than you would for the seconds.”

There were over 20 grades and classifications of salt fish, the finest of which went to Europe and the Mediterranean and the poorest grades to the West Indies, where it is still known as stockfish. The “West Indian” grade was defined as “broken, but not excessively. Sunburnt, over-salted, slightly slimy or dun. Hard dried.” Thus the fish needed to be soaked in a stockpot for an extended period of time before eating. 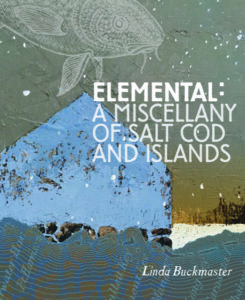 With my first trip to Scotland, my awareness expanded. A large percentage of those American sugar plantations were owned by Scotsmen. These places were known as hellholes, where a second son of a wealthy Scots family or one who needed his own start could make his fortune and maybe even a peerage. Many plantation owners and traders from Glasgow made “nationally significant” fortunes during the golden days of sugar in the 18th and 19th centuries. In 1807, the Glasgow West Indian Association was formed to protect their pro-slavery interests.

My curiosity was piqued when I attended a writing residency at Cove Park, about an hour from Glasgow. The community building of the Centre had a sprawling, eclectically unorganized bookshelf of writing by and about Scots, both classics and contemporary. Interestingly, the village of Cove Park was a big summer resort of these same merchants in the 19th century with their overblown mansions and yacht clubs.

The book I really connected with is Yonder Awa’: Poetry from the Empire Café, compiled after a series of readings in Glasgow by Scots Caribbean poets, descendants of the former colonies. The phrase “yonder awa awa” first appeared in Sir Walter Scott’s novel, Rob Roy, and became a euphemism for the West Indies. (The real-life outlaw Roy was himself “transported” to Barbados for his crimes.)

Some of the poets’ ancestors arrived in Scotland in earlier times either as servants or as the mixed-race children of Scotsmen living in the islands. Others arrived more recently, especially after WWII when Britain needed laborers who became known as the Windrush Generation named for the ship they traveled in.

Sugar cane production was a particularly nasty undertaking—razor sharp cane leaves, all those machetes, cane-chopping machinery that needed to be fed, and giant boiling pots to be stirred. It was very labor-intensive, so much so that in the 1800s, 80% of the population on Barbados were black slaves. The whites were very aware of their minority status and the potential for slave rebellions. Punitive measures were the worst I have ever read.

As in the U.S., the Scots are undergoing a reckoning of their own role in the slave economy. This winter, I received an announcement of a reading in Ullapool on Scotland’s northern coast by David Alston of his new book, Slaves and Highlanders: Silenced Histories of Scotland and the Caribbean (Edinburgh University Press). Alston is a thorough researcher and lively writer; he mentions almost every well-known Highlander clan name as being involved. Many of those names, of course, have reappeared on the North American coast.

Linda Buckmaster has lived in Belfast for over 30 years. She was formerly Atlantic and Gulf Editor for National Fisherman, poet laureate of Belfast, and worked in the University of Maine System. Her book, Elemental: A Miscellany of Salt Cod and Islands, is available in local bookstores and can be ordered online from Hello Hello Books in Rockland.