It’s no secret that Mainers rely on the ocean. Whether it’s our lobstermen hauling traps, our seaside inns welcoming guests, or our families visiting the shore, our legendary coastline and clean and healthy ocean drive our economy and way of life.

No wonder Mainers from all walks of life, including all of Maine’s Congressional Delegation and the entire state legislature have come out against the recent proposal from the Department of the Interior to open the Atlantic Coast to oil and gas drilling—including waters off the coast of Maine.

No part of this offshore drilling plan will benefit our state, and the risks to our healthy coastal economy, and our wildlife, are enormous.

Two of Maine’s most important industries, tourism and commercial fishing, depend on healthy coastal waters to stay afloat. These sectors pour billions of dollars into our economy each year, with the Maine lobster industry generating $1.7 billion, and coastal tourism contributing $4 billion every year. A spill would wreak havoc on these industries—killing and contaminating lobsters and their habitat, and deterring tourists from visiting oil-soaked shores.

Even the process of exploration for oil and gas drilling would harm our coastal economy. Exploration associated with drilling uses extremely loud seismic air gun blasts once every 10 seconds for days or weeks on end. This disrupts the migratory patterns of fish, whales, and other sea mammals and would shrink the commercial fish catch.

It also deafens whales and other marine mammals that use sound to navigate and find mates and food. Seismic blasting would threaten the very existence of already fragile populations of charismatic species like the North Atlantic right whale. Making reproduction more challenging for these creatures would push them closer to extinction.

Drilling off Maine’s coast would increase air pollution, further compromising the quality of the air we breathe. Between drilling and processing oil, a single rig can generate as much pollution as 7,000 cars driving 50 miles per day. Polluted air increases asthma attacks and other respiratory ailments like bronchitis. It also increases the risk of life-threatening conditions such as cancer, and burdens our neighbors and health care system with substantial medical costs.

No matter how many safety precautions the drilling industry takes, it is an inherently risky business and an oil spill off Maine would be catastrophic. We all saw what happened with the April 2010 disaster involving the Deepwater Horizon oil rig in the Gulf of Mexico. Considered the worst oil spill in U.S. history, the Deepwater Horizon disaster killed 11 people and continued to spew oil for 87 days, pouring more than 3.2 million barrels of oil into the Gulf. This oil fouled habitat and killed wildlife, with seabird losses alone in the hundreds of thousands. The economic pain for coastal communities was immediate and devastating. An oil spill of that magnitude anywhere in the North Atlantic would be disastrous for Maine.

At a time when we should be turning to clean, renewable energy, oil drilling would be a step backwards. Burning more oil would bring more climate change and problems for Maine’s economy and way of life. Warmer waters harm lobsters; higher seas and bigger storms batter coastal communities; more air pollution increases breathing problems for Mainers.

We have already seen dramatic increases in insect-borne diseases like Lyme; our dependence on oil is an open invitation for more of these harmful insects to spread throughout our state, putting people, pets, livestock, and wildlife at risk.

Unfortunately, the endorsement of more oil over renewables like solar is on top of the Trump Administration’s long list of climate protection rollbacks, including drastic cuts to the Environmental Protection Agency budget and rejecting the Clean Power Plan.

This short-sighted proposal to drill for oil and gas off the coast of Maine and New England is an oil industry hand out that puts polluters’ gains ahead of Maine’s prosperity and well-being. There’s simply no reason to jeopardize Maine’s vibrant coastal communities and marine life for the possibility of what experts say is a small amount of oil and gas, if that. That’s why on March 7, we saw so many fishermen, elected officials, business owners, and conservation and health leaders speak out against this plan in Augusta. And it’s why we’ll continue to fight back until we see Maine waters excluded from this dangerous proposal.

Kristin Jackson is the federal outreach coordinator at the Natural Resources Council of Maine. 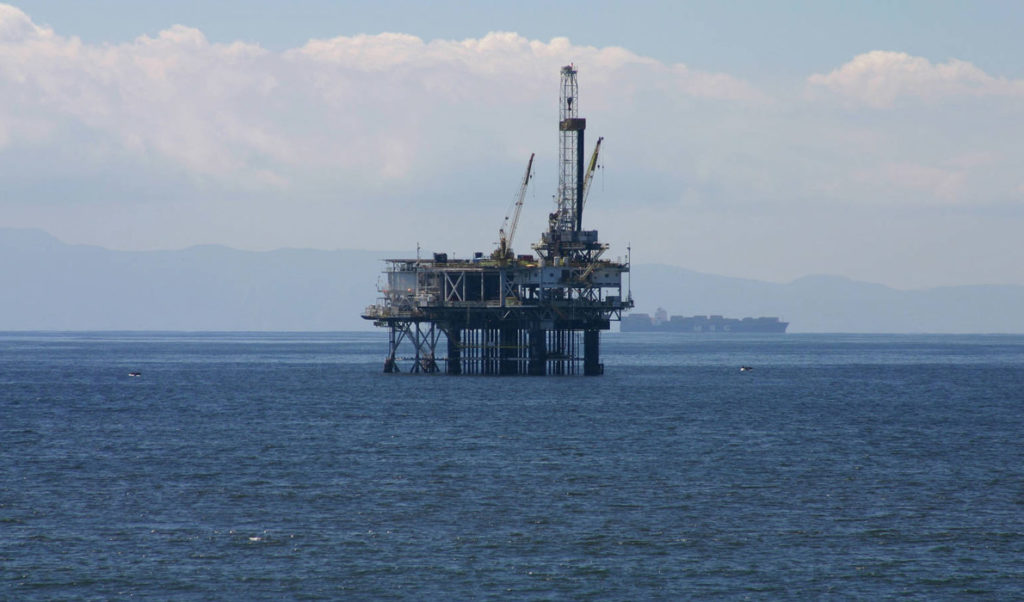 An oil rig off the California coast.