After a year spent finding $300,000 in funds, and securing voter approval and the signatures of 14 heirs, Machiasport selectman Jeff Davis thought the town was on its way to purchasing 37 acres to expand public access at Bucks Harbor, home port to more than 80 fishing vessels.

“These are the last remaining undeveloped acres,” said Davis of the waterfront parcel on Bucks Head, the promontory that defines one edge of Bucks Harbor and gives it its name. Local history holds that it’s all named forCapt. Thomas Buck of Plymouth, Mass., who delivered the first settlers to Machias in 1763.

The deal was moving ahead until a routine title search uncovered problematic information—a covenant that prevents the land from being used for anything but residences. Though the 37-acre tract has been in the Pettegrow family since 1805, the family’s subdivision of some abutting acres placed the covenant on their remaining land in 1981. 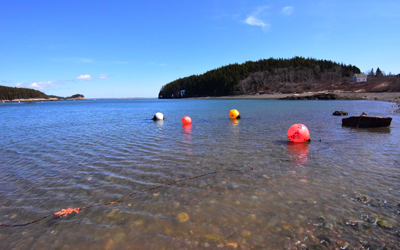 Machiasport’s attorney wrote the Pettegrow Point Homeowners Association (HOA), asking the dozen or so landowners to approve a waiver releasing the covenant, but the landowners refused.

“That’s looking like it is probably not going to happen,” said Davis of the deal. “I don’t want to count it out completely, but it’s looking less and less likely.”

Although only one of the HOA members shares a boundary—roughly 100 feet long—with the Pettegrow property, the legal nature of the subdivision requires complete agreement from all the landowners.

In order to secure funding for the purchase, Machiasport partnered with Land for Maine Futures in 2017. LMF proposed a grant to cover half of the purchase price using the Public Access to Maine Waters Fund. The primary aim of the fund, said LMF Director Sarah Demers, is to ensure public water access in perpetuity. The purchase would give the town nearly one-half mile of public shorefront.

“There’s a lot of interest, even outside the town, to have access there,” said Demers.

Davis said the town needs the land because it has outgrown the parking lot and partial beach used to access Bucks Harbor today, a small parcel it purchased from the same family in 2002.

“Over these last ten years the increase in the amount of traffic in that one little tiny spot has gotten to the point that, when the family offered the town the possibility of buying the abutting land, we jumped at it,” said Davis. “We need a way to be able to alleviate that congestion down there.”

Beyond commercial fishermen, he said Bucks Harbor has seen an increase in use from the U.S. Navy, the nearby University of Maine at Machias, summer camps, businesses, and boaters, to name a few.

LMF’s participation would also guarantee public access to the land, though the town would determine what activities could take place on it together with its project sponsor, the Maine Bureau of Parks and Lands.

“That bureau can provide resources to the town in terms of managing public use,” said Demers.

At least in part, it’s the public’s use of the land that worries the neighbors.

“The majority of the land there was going to be used as a public park-type property,” said HOA President Larry Barker, “with no plan, with no budget, with really nothing to offer whatsoever with regard to how this was going to be managed.”

Barker said the landowners were also concerned that the new public space around the harbor could draw increased traffic to the area, not all of it welcome. Machiasport does not have a police force, nor the budget to consider adding one.

“Maybe someday, if there were issues there, the town would have to hire law enforcement, for example,” he said. “You can imagine the obvious concerns.”

LMF acknowledged the concerns of the landowners, and of the town.

“It’s an interesting situation we’re facing, in terms of a desire from the public for more opportunities to have public spaces,” said Demers. “You’re dealing with an issue where you have an amazing, one-of-a-kind public resource, and a public entity that has limited capacity. How do we work in a partnership here?”

Debbie Nielsen is one of the Pettegrow heirs, and lives a short distance up the road from her grandparents’ former land. From her house Nielsen can see all the traffic flowing to and from the harbor, and said she remembers a time when the harbor wasn’t as full as it is today.

“I want the town to have our land, and so do my cousins, because three-fourths of them have been lobster fishermen or their father has been, and because I feel the fishermen deserve this,” she said. “My son lobster fishes out of here right there on that beach, and I just feel the guys deserve the beach.”

Barker said the HOA is open to considering a proposal to expand parking for the fishermen, a possibility the town will consider. But without the clear title needed to utilize LMF’s public water access fund, Davis said it’s not likely the town would purchase the land. The next steps, he said, are another meeting with the landowners’ representatives and possibly another town meeting.

For now, Demers said LMF is standing by.

“We’ve offered some suggestions to the town, maybe having a local advisory committee that is made up of the town and other interests in the area to formulate a plan on how this property might be used,” he said.

“We’re willing to be patient, because we recognize the unique value of this property.” 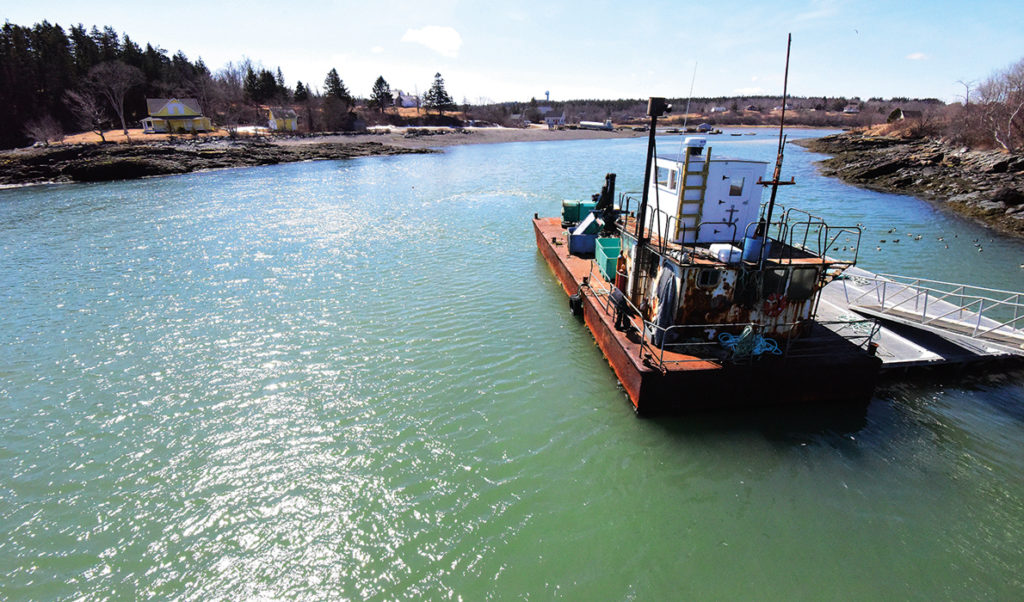 A barge moored in Bucks Harbor.