There were hugs, handshakes, and smiles as parents, siblings, and girlfriends joined Maine Maritime Academy students aboard the training ship State of Maine in Searsport on July 30.

The academy offers this “family cruise” for the last leg of the 90-day training voyage, docking the 500-foot-long ship in Searsport to allow families—mostly parents—to board and make the short hop to Castine.

For Jerry and Reneé Mehuren of Searsmont, though, the reunion with their daughter Kristine would have to wait. Kristine Mehuren, 21, a marine transportation major who became a senior at the college on completing the trip, was serving her shift on the bridge.

A couple of hours later, after parents got to witness their sons and daughters race off to their stations during a lifeboat drill, and after the vessel left port, Kristine was still on duty. She was all business on the bridge, checking nautical charts of upper Penobscot Bay, as an officer identified buoys and landmarks such as a communications tower on Sears Island.

Students took turns at the helm.

“Every freshman gets a chance to drive the ship,” explained Ryan Burke, a freshman who guided a reporter around the ship. 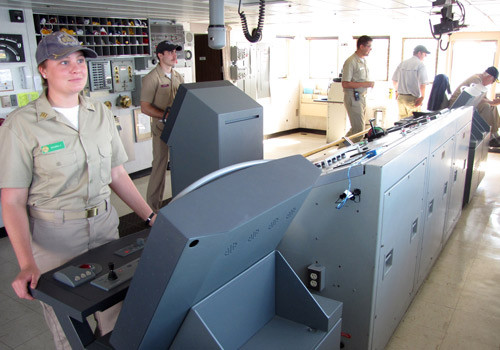 Kristine Mehuren on the bridge.

Reneé Mehuren admitted to worrying about their daughter, especially after the sinking of the El Faro two years ago, which resulted in the loss of all 33 aboard, including five Maine Maritime graduates.

Kristine is already a veteran of the high seas, though, having worked aboard a ship last summer in the Pacific, calling at ports in Singapore, Guam, the Philippines, and Japan. The Mehurens said they would hear from Kristine almost daily, via text message or email, during the training voyage.

“She seems to enjoy it,” Renee said of their daughter, who followed in a cousin’s footsteps in attending the academy. 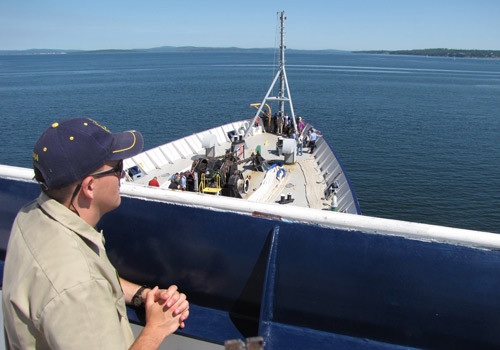 Ryan Burke of Lyman looks out over the ship’s bow.

Kyle Fallon, who also will return in the fall as a senior as a marine systems engineering major, said this trip differed from his freshman voyage.

“I appreciate not being the one mopping the deck, and instead being the one supervising the mopping,” he said with a smile. The visit to Cobh, Ireland was his favorite stop, he said.

Fallon’s parents, Tom and Debbie, monitored the voyage, and said they were glad the academy sent out status notices at least once a day.

Burke, a freshman from Lyman in York County, majoring in marine transportation operations, said his favorite stop was in Spain: “Great food, great people,” and a castle that dated to the bronze age stood out among the historical sites.

“Watch” meant Burke and his fellow students would patrol the bow and stern, keep an eye on the weather and the engine room. Maintenance chores included chipping and painting the deck, and cleaning filters and changing the oil in generators. Training included sea celestial navigation exercises, and “utility” means cleaning.

Burke joked that he suspected officers loosened nuts on the engine so they would leak oil, because the job of wiping down greasy surfaces never seemed to end.

When the horn sounded for the lifeboat drill, Burke hustled to his station, taking time only to say, “I’m part of the boat squad,” explaining later that he was responsible for deploying the boats.

The ship encountered some heavy weather just two days out of Castine, with 15-foot seas and 40-50 knot winds. Burke didn’t get seasick.

“There were a few people who did, though.”

Heading home from Ireland saw steadily rough weather, though not as severe. The ship fell 12 hours behind schedule from battling the wind and waves, he said, which meant leaving Boston at 3 a.m. to return to Maine.

Students sleep in rooms with bunks stacked three high, housing 27 per room. In some bunk rooms, there is less than three feet between the beds.

But on a mild day when duty doesn’t call, students hang out on the fantail, nicknamed “steel beach,” where they listen to music, play corn hole and work on their tans.

“The whole ship is yours to roam, with the exception of the officer’s quarters,” Burke said.

Every morning, they muster, and line-up with their company.

“If somebody’s missing, everybody waits,” he said. When tardiness became a problem with one company, the captain ruled that for every minute a student was late, his group would lose two hours of free time. The problem was resolved.

Giving the tour, Burke mentions the ship’s wastewater treatment plant, explaining how the effluent is treated with chlorine. It’s the sort of detail he never thought about before shipping out on the training voyage—and that’s why students are required to take these voyages.

After leaving Searsport with the assistance of the academy’s tug, Pentagoet, and tugs from the Fournier Tractor firm in Belfast, the State of Maine headed south along the eastern shore of Islesboro. The idea was to give parents a taste of life aboard ship—including eating lunch in shifts below decks before turning around and heading to dock at nearby Castine.

As the ship turned the corner at Dyce Head, Burke looked wistfully at the shore, and said it was hard to believe he had been gone three months. At the same time, he was eager for the next two days to pass, with students cleaning up and shutting down the vessel. 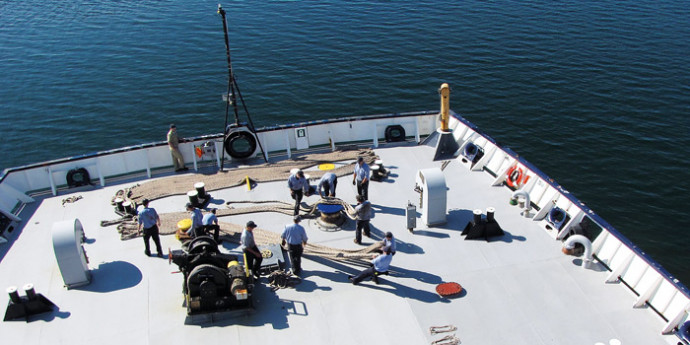 Students aboard the State of Maine haul hawser lines across the ship’s fantail in anticipation of docking in Castine. 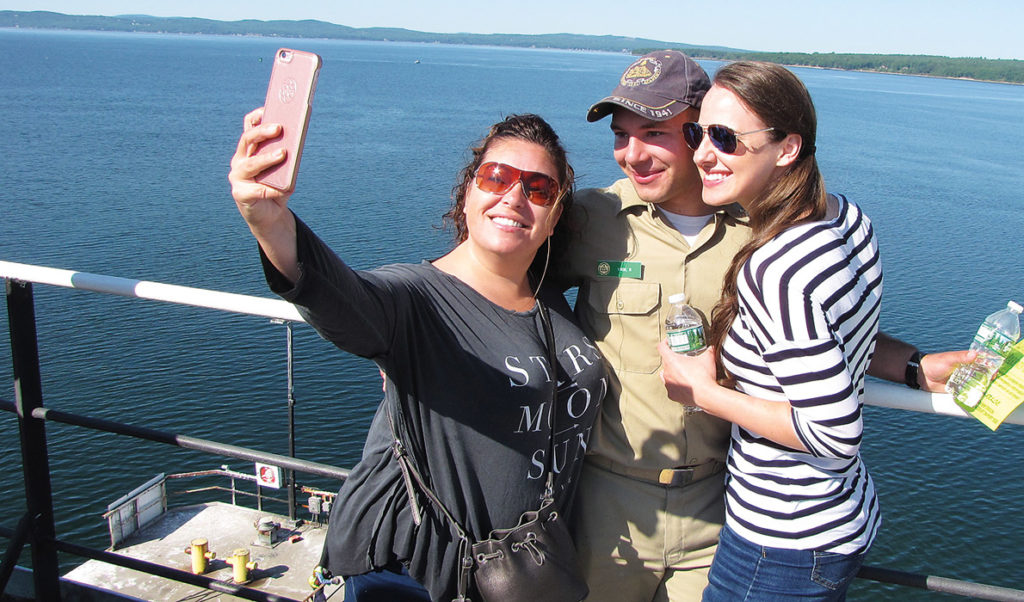 Rylee Knox of Turner poses for a “selfie” with his mother