She’s sailed around the world with an all-female crew and competed in the America’s Cup with the first all-female team. She earned a law degree, worked for a Canadian seaweed processing firm, and lived for a time in New Zealand.

But for Merritt Carey, the small coastal village of Tenants Harbor is the place that anchors her soul.

These days, Carey, 50, runs the Luke’s Lobster shack at the wharf in this Knox County fishing village, and it marks a return to a kind of home. Originally from Amherst, Mass., where her father taught at the University of Massachusetts,  Carey and her parents would travel to Tenants Harbor each summer, the fifth generation of the family to do so.

Carey remembers coming north with her father as early as May when his classes ended, so eager was she to return.

“I would be here all summer. I spent a lot of time on the shore on my own, in a dinghy, exploring,” she remembers, chatting in between serving drinks to customers and fielding phone calls.

Her father owned a Concordia yawl, and the summer usually included a cruising voyage of a couple of weeks.

“It was pretty great,” Carey said. “I came every single summer, all through college.”

But she also brought a work ethic and community values to those summer vacations, an approach to life that has carried through to today. 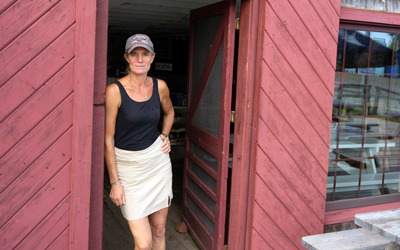 First, she worked at Cod End, a family-run fish market and restaurant that operated in the building now occupied by Luke’s. “I was the dock girl,” she says, “pumping gas and lugging ice.” Then she started Merritt’s Delivery Service, bringing cooked lobsters, steamers, and other fare to boaters who had anchored in the harbor. She soon realized she could earn additional money in the mornings offering muffins and newspapers and hauling away their garbage in her Boston Whaler. She confesses to knowing her customers might be inclined to tip more generously in the late afternoon after having a few drinks.

After completing an undergraduate degree at Brown University, Carey pursued sailing in a serious way. In 1993-94, she served on the crew of the second all-female team to sail around the world in the Whitbread Around the World Ocean Race (now the Volvo Ocean Challenge). Then she was the “bowman” on the first all-woman team competing in the America’s Cup race. In both endeavors, she was the youngest member. When it showed at an area movie theater, she brought her daughters to see Maiden, the documentary about the first all-female crew to sail around the world.

“You tell your kids you’ve sailed around the world and you might as well tell them you went to the grocery store. When they watched Maiden, for about one second, I had some parental cachet,” Carey says with a smile.

She went on to race internationally with women’s match racing teams—France, Australia, Japan, and then she moved to New Zealand, enrolling in law school while she recovered from a torn ACL sustained during the America’s Cup.

The allure of Maine drew her back.

“Honestly, for all my globe-trotting, I missed Tenants Harbor. Through the long, rainy New Zealand winters, I kept thinking of that little harbor, the salty ocean smell, and I just wanted to come back,” Carey recalls. She completed her law degree at the University of Southern Maine Law School in 1999.

She began working at Verrill Dana law firm, but it wasn’t a good fit.

“I was a terrible lawyer,” she says with a laugh, with her approach to conflict tending to be along the “Can’t we all get along?” lines. Yet, she says, “I am really glad I went to law school,” for all the analytical skills and disciplines that have served her well in other work. “I’m more of an entrepreneur,” she says.

Consulting on employment law and human resources, and then marketing and communication work, for boat builders and other marine businesses followed. “I really knew that world,” she says.

More recently, Carey worked for Acadian Seaplants, a Canadian company that purchased and processed rockweed, as its director of Maine operations. “It’s a really great company,” she says.

But these days, she is focused on the critical world of working waterfronts and coastal economic resilience, with Tenants Harbor the center of her work.

“This place is really near and dear to me. My childhood summers here were formative,” she says.

When she learned that the wharf might be sold, one of the only family-owned wharfs remaining in Tenants Harbor, Carey contacted Luke Holden, one of the owners of Luke’s Lobster. At that time, Cod End, the rustic seafood restaurant and fish market she had worked at as a girl, had been closed for a few years.

With the Miller family, which owned the wharf, and other local fishermen, Carey and Holden helped create the Tenants Harbor Fisherman’s Coop, Maine’s first vertically integrated fisherman’s coop. Luke’s re-opened Cod End as Luke’s at Tenants Harbor and ran it for two years, but, as Carey puts it, “It needed a local anchor.” After discussing logistics with Holden, in 2018, Carey stepped in and took over running the shack.

“I had no restaurant experience, but I got a lot of it, really fast,” Carey says ruefully.

Now the shack is hitting its stride, she says. On this August weekday, a couple from Munich, Germany is ordering lunch, and Carey fields calls from travelers wondering what seafood is available today.

At such working waterfronts, there is a way of life at stake, she believes, and she is committed to keeping it healthy.

“I think it’s going to take a lot of nimble, creative, innovative thinking,” she says, and that includes strengthening and adding value to existing and rebounding fisheries, aquaculture, and other emerging endeavors. Carey helped found Maine’s first aquaculture coop as a way to build economic diversity. The coop grew and sold Maine’s first farmed scallops.

In the off season, she returns to Yarmouth with her husband and children, aged 17, 12, and nine. Her work for Holden then includes managing a variety of projects, such as working with the company’s efforts to retain Boothbay Harbor’s Carter’s Wharf.

As long as working waterfront infrastructure remains in place, she is optimistic about the ocean economy. “It’s too big a resource. It’s not going away.”

Editor’s note: Luke Holden serves on the board of trustees of the Island Institute, publisher of The Working Waterfront. 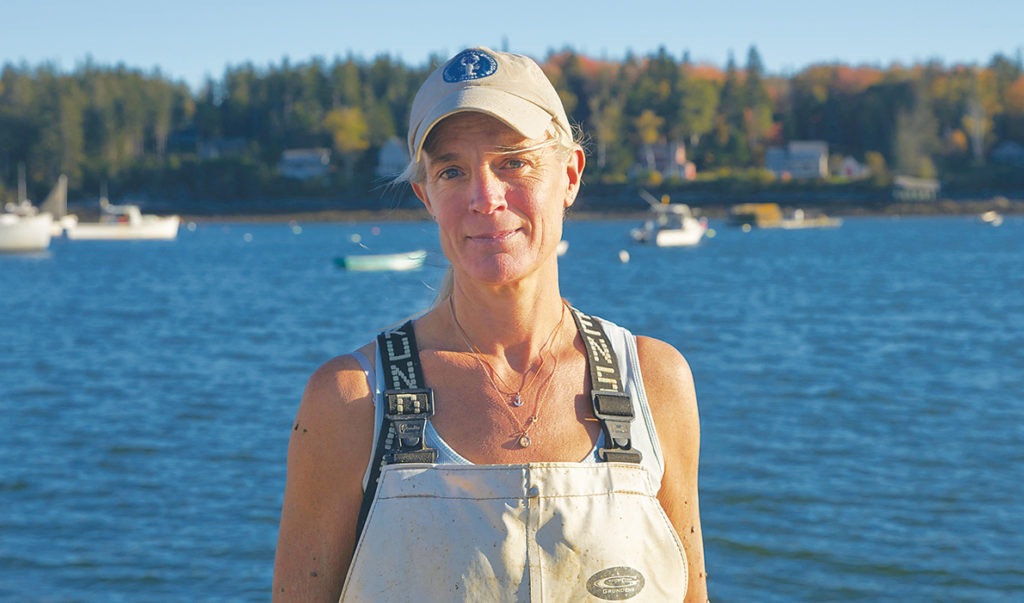