—To have no personal moods at all, to have

only the same moods that the weather has

here on North Haven Island—that would be

When the poet Elizabeth Bishop’s letters were published in 1994, many of her admirers learned of her connections to Maine for the first time. Bishop (1911-1979) had visited Wiscasset and Stonington in 1948 and then returned more than a quarter century later to spend a part of six summers (1974-1979) on North Haven Island.

During those latter stays Bishop kept a journal, which is now being published as a benefit for the North Haven Library. Edited and introduced by scholar Eleanor McPeck, Elizabeth Bishop: The North Haven Journal, 1974-1979 is quite a coup: Bishop is considered one of the master poets of the 20th century. Poems like “Roosters,” “The Prodigal,” “The Fish,” “One Art,” and “In the Waiting Room” appear in nearly every anthology of American verse. When her last collection, Geography III, appeared in 1976, poet Anthony Hecht declared that her writing “was about the finest product our country can offer the world… It beats our cars and films and soft drinks hollow.”

The poet stayed at Sabine Farm (so called, she once stated in a letter, “because Mrs. Pettit’s husband’s first name was Horace!”). Bishop entertained visitors—as fellow poet Robert Lowell once said, “In Maine your friends pour in like lava—hot from their cities”—but also relished the remoteness.

Bishop’s journal is a kind of daybook, a place to record the names of wild flowers, birds, recipes, the comings and goings of a neighbor’s dog, names of medications (the poet suffered from arthritis), current events (“Elvis Presley died”), picnics, a trip to Vinalhaven, the weather. An example of the latter: “At 5:30 or 6 this AM—a magnificent thunderstorm—the thunder approached from all sides—as if it didn’t give a damn—had no special aim, etc. (How anthropomorphic one gets off with Nature like this).”

The journal entries sometimes recall the telegram-like epistles the painter John Marin sent to friends during his stays in Maine. On an early visit Bishop observed: “Maine Islands—small ones—no beach—upright—crowded with firs—no place—no foot-hold—for anything.” (Alice Quinn, president of the Poetry Society of America, valiantly transcribed the journal; a page reproduced in facsimile attests to the challenge.)

In a number of places Bishop appears to be working out an idea for a poem. One entry riffs on “late sleepers,” with the repeated line “Their dreams are working, working.” Another work in progress includes the line “Thoughts fly up from the soul before they are caught in words”—a wonderful concept.

Bishop also displays a sense of humor, noting at one point how her companion, Alice Methfessel, referred to the barn swallows in residence at the farm as “’sh–bottoms.’” Her sense of the community is appreciative yet somewhat condescending: “Tiny fish market—‘Flipper Fresh.’ (I wonder on what long winter night they thought that up?)”

In the entry for Aug. 16, 1977, Bishop writes, “One poem—‘N.H.’ done; that’s all.” She is referring to “North Haven,” her elegy to Robert Lowell. If that was the extent of her writing, so be it: In six, five-line stanzas the poet composed a masterpiece of remembrance that stands among the finest evocations of a Maine island ever written. The poem, a hand-edited draft of it, and a number of photos of Bishop on North Haven, along with a note from John Storck, president of the North Haven Library Board of Trustees, round out a memorable and entertaining literary ensemble.

The book will be on sale at the North Haven Gift Shop and the library.

A symposium to commemorate the publication of Bishop’s journals will be held at Waterman’s Community Center on North Haven Aug. 14-15. For more information about the symposium and the journals, go to www.eb.northhavenlibrary.org. 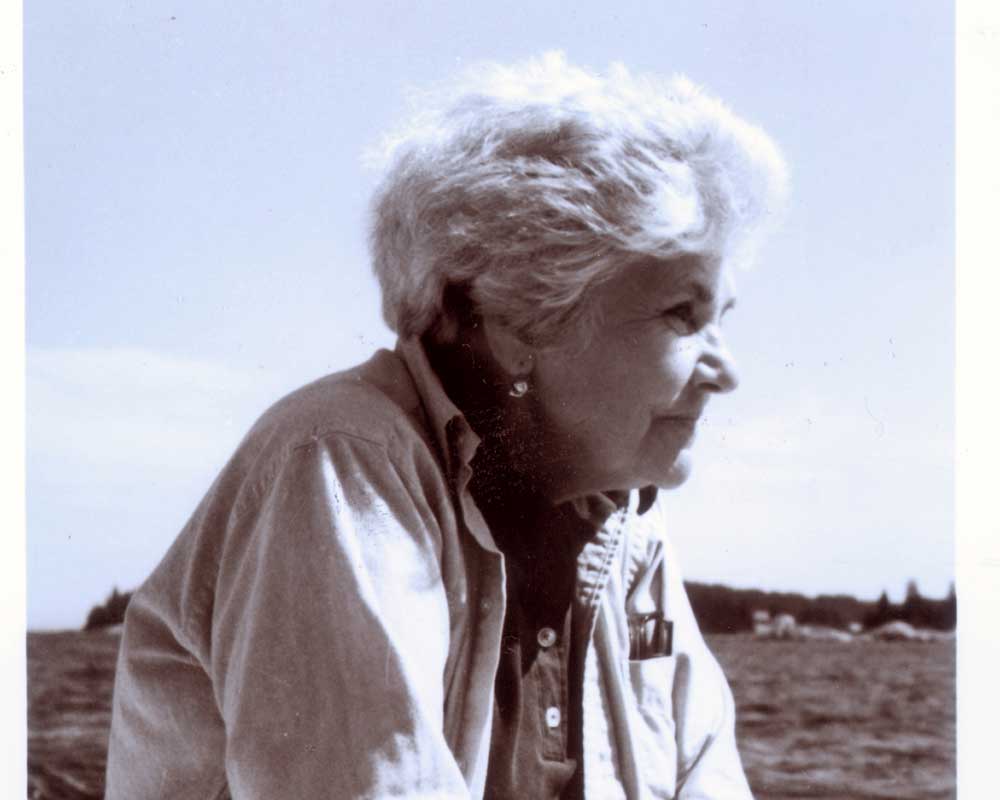 A photo of Bishop that appeared in a 1994 New York Times review of One Art: Letters