The town of Lubec was awarded a $19,650,000 federal grant to provide a year-round safe harbor for resident and visiting fishermen and recreational boaters. The total cost of the project is estimated at $19,689,750, with the remainder of the cost paid for by a $30,000 grant from the state Department of Marine Resources and a grant from the Butler Foundation.

Carol Dennison, chairwoman of the town’s board of selectmen and a member of the Safe Harbor Committee, said it will take at least four to six months, and possibly as long as a year for the contract with the federal government to be finalized.

According to the project description, funds will be used to construct a boat launch, breakwater, and wharf to accommodate 35 boats and to create a protected mooring field and sheltered boat launch. The wharf will have a two-way road to the end of the pier with two hoists to assist fishermen in getting their product to market safely and quickly.

The description also says the project was designed to “mitigate the inclement weather or winds coming from the north that have caused fishermen to die, boats to sink, loss of property, and many cases of hypothermia.”

Five fishermen died in 2009 when two fishing boats sank, within months of each other, in Cobscook Bay. A granite memorial was later erected adjacent to the Lubec public landing with the names of more than 100 fishermen who, since 1900, either lost their lives in the waters off Washington County and Charlotte County, New Brunswick or were from those two counties and lost their lives in other waters.

“It’s very dangerous,” said Dennison.  He described the current conditions as “very treacherous” because of the strong north winds that assail the area.

“There’s no safe place to launch a boat in the wintertime. The marine patrol’s also had to operate under those same conditions.”

Dennison said in addition to making travel safer for fishermen and boaters, construction should reduce the marine patrol’s emergency response time.  In at least one instance, Maine Marine Patrol officers were unable to launch their boat in time to prevent a fisherman from developing hypothermia because all potential launch locations were blocked by ice buildup.

One component of the project involves making dock space available to the marine patrol, making it possible for their boat to be available fulltime throughout the year.

“We hope the resolution of these issues will help to eliminate the many unsafe factors here now,” Dennison said.

Lubec’s harbormaster Ralph Dennison said the town is currently in the process of obtaining permits from the Maine Department of Environmental Protection. He said the next step will be to work with the U.S. Army Corps of Engineers.

Dennison hopes the project will be completed by 2023 or 2024, barring any unforeseen obstacles.

Sen. Susan Collins was instrumental in the BUILD (Better Utilizing Investments to Leverage Development) grant being awarded to Lubec. In a Nov. 6 press release, Collins said the project will significantly improve safety for fishermen in that area.

“A year-round Safe Harbor for fishermen and the Maine Marine Patrol is essential for a local economy that relies on the fishing industry,” Collins said. 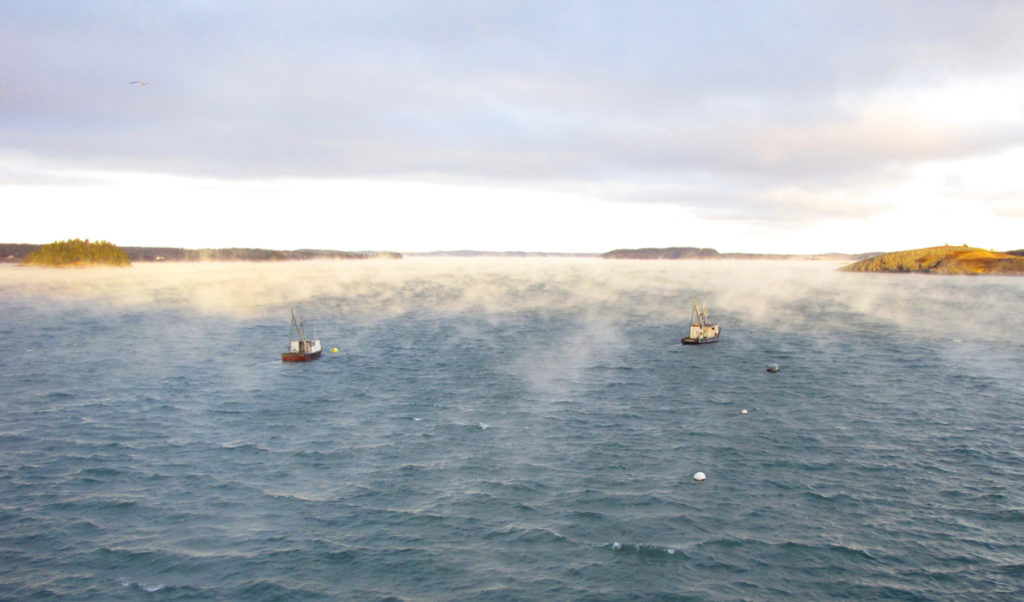 Fishing boats at anchor in Lubec in January 2018.