A booming lobster resource, combined with a trend toward larger boats with more horsepower and the latest advances in navigational electronics, has an increasing number of Maine’s lobster fishermen leaving behind the crowded inshore fishing grounds and heading further offshore for a sustained, year-round harvest.

“It’s something that’s been evolving over the last five, ten years,” said Patrice McCarron, director of the Maine Lobstermen’s Association.

Still, the offshore fleet is small, and its increase is small.

According to the Atlantic States Marine Fisheries Commission (ASMFC), more than 98 percent of the total Gulf of Maine catch comes from the “near-shore” area. “Inshore” is defined as state waters from 0-3 miles, “near-shore” as 0-12 miles, and “offshore” as 3-200 miles.

Maine has always had a small number of fishermen who fish year-round, which takes them offshore during the winter. That activity is miniscule compared with Maine’s peak five months of July through November.

“Handfuls of people are fishing are far as 40 miles from shore,” said McCarron.

For some, it’s a matter of mission creep: In the past, fishermen have set traps offshore during the winter and spring—when deeper offshore waters are warmer than inshore, and therefore more desirable for lobsters—but headed inshore for the peak summer season. Nowadays, more are simply staying offshore.

“They’re finding the lobsters are holding on out there, so rather than shift inshore, they stay out there,” McCarron said. “Some guys say they might catch a little less during the summer, but it’s worth it to fish in a less-congested area.”

Typically, lobsters migrate offshore in the fall and winter to stay in the relatively warmer offshore waters. They migrate inshore in the late spring and summer to molt. According to the ASFMC, lobsters are more prevalent in coastal waters but can be caught offshore as far as 190 miles from the coastline. Maine’s fleet is comprised mainly of small vessels of 22 to 42 feet in length that make day trips in near-shore waters out to 12 miles, with larger boats able to head further offshore for multi-day trips.

Maine fishermen must have a federal permit to fish beyond the three-mile state water boundary. About 20 percent of the fleet possesses a federal permit, a ratio that’s been stable through the years. Federal permits can be bought and sold. Their value has been creeping up.

“For years, they sold for $10,000,” said McCarron. Today, she said, that figure has doubled or more, for Maine fishermen. In Massachusetts, federal permits are going for more than $30,000.

Fishing in offshore waters is complicated by weather and sea conditions, and the boats have to be big enough, carrying modern navigational electronics, to travel safely, McCarron noted.

“Only a small portion of our fleet has the ability to do that,” she said. “They don’t have as many fishing days to get out there. Offshore, you’ve got to pick your weather days. When they have the weather windows, they’ll go.”

Federally permitted Maine boats must comply with state law. For example, they have to fish the majority of their traps in their declared zone, and may set the rest in an adjacent zone. The zones extend out to the 200-mile limit. Federal whale protection regulations require offshore fishermen to string up a minimum of 15 traps per trawl, a far cry from the one or two traps per trawl allowed inshore.

Fishermen need bigger boats to travel offshore safely, handle the weather and sea conditions, and manage the trawls. Typically, vessels of 35 to 40 feet are capable of managing this safely. But every vessel and fishing operation is different.

“Offshore fishing is not for everyone,” said McCarron. “The highest-earning percent of the fleet is able to afford upgrading their vessels. It’s a significant investment. You’ll hear of somebody upgrading to a 50-foot boat, and then the son buys the 42-foot boat. There are younger guys building the 40-foot boats now, and they plan to fish those boats for the next 25 years. So today’s new boat is more than a young guy would have had 20 years ago.”

“It’s just different,” McCarron said. “With the offshore fishery, you may not get as big a landings spike as you do inside, but you get nice, strong, steady landings for longer periods of time. You also land more old-shell lobster, earning a higher price per pound in the offseason. You have to, in order to pay for fuel and crew. So the minimum catch needed to break even for an inshore trip is less than offshore.”

Ocean planning in the Northeast, underway since 2010, is seen as a way to make better, more efficient decisions about different ocean uses such as fishing, offshore energy and recreation, as well as accounting for environmental changes and the health of the ocean and its creatures.

Government agencies and stakeholders work together to plan for the future and to make better decisions at the regional level, ensuring a sustainable healthy ocean. The Northeast Regional Ocean draft plan will be released for public comment in May. Please visit http://neoceanplanning.org for more information. 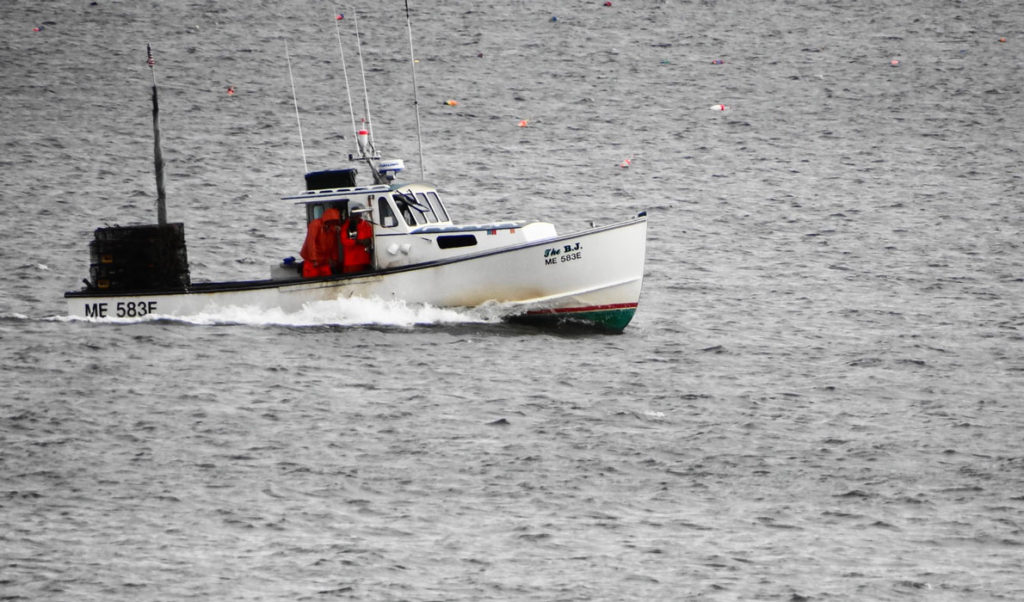 A lobster boat returns to port.