Maine fishermen harvested 121 million pounds of lobster in 2015 that brought them more than $500 million in sales, the Department of Marine Resources (DMR) announced Thursday, March 3.

The value of the catch is an increase of $37 million over 2014, which itself set a new record. The lobster fishery now makes up 81 percent of Maine’s fish landings by value.

The catch volume in 2015 marked the fourth consecutive year that more than 120 million pounds of lobster were landed. To put that figure in context, 1994, when 35 million pounds were landed, is considered the median year of the last 30 or so.

“Maine’s lobster fishery continues to be a major engine for our coastal economy,” DMR Commissioner Patrick Keliher said in the announcement.

But scientists, speaking at the Maine Fishermen’s Forum on Friday, March 4, said surveys of “young of the year” lobster suggest a downtown is likely through 2020.

DMR’s Robert Russell said the American Lobster Settlement Survey, which uses 40 stations in Maine, shows lower levels of larval lobster settlement, which may correspond to lower catch levels in the future. Still, scientists hedge their bets, because factors such as rising ocean temperatures are wild cards.

“We don’t have that crystal ball,” Russell said. “We’re not really sure if we’re capturing the new changes in ocean temperature.”

Warmer waters could mean lobster reach maturity faster, and it could mean they are finding new habitats, and are not being noted in surveys, said Rick Wahle of the University of Maine’s School of Marine Science.

He projected a dip in the catch in the coming years.

“We seem to be just falling off that massive peak in landings,” he said.

The period from 2005 to 2008 was a “big bubble” in settlement, when the larval lobster fall to the bottom and find shelter under rocks, but now, “those numbers are well below average,” in Maine and Massachusetts, Wahle said.

The projected drop in landings will play out differently through the coastal management zones, he said. For example, Zone B, which includes the Mount Desert Island area, saw almost 17 million pounds of lobster landed in 2015, but that figure may drop to 12 million by 2020.

If settlement is an accurate predictor, Wahle said, “We expect landings to fall in some areas, especially in the east.” But he highlighted the “if” part of the prediction, saying, “Brood stock abundance has never been higher, yet settlement is declining.”

The price paid to lobster harvesters, as it relates to landings, also contains moving parts. Traditional economic factors of supply and demand apply, but for lobster, the timing of the crustaceans’ molt—known in the industry as the “shed”—also impacts price.

Lobster hunker down under rocks when their new, larger shells are soft, because they are vulnerable to attack and injury. When they emerge and begin to be caught in great numbers, their shells are still soft. In that state, they don’t survive shipping as well as they do when the shells harden. Historically, much of the soft-shell lobster—which the Maine Lobster Marketing Collaborative is rebranding as “new shell”—is sold and consumed in or near Maine.

If the shed occurs early, before tourists are ready to buy lobster at shore-side restaurants, a glut might depress prices. Andy Pershing, chief scientist at the Gulf of Maine Research Institute, said it is very likely that the shed will occur three or more weeks earlier than normal this year.

The 121 million pound 2015 catch was distributed across the management zones this way:

The landings for the zone in southernmost Maine were not available, Wahle said.

DMR put the tally of the value of all Maine fisheries at $631 million, an increase of $33 million.

More landings data can be found at http://www.maine.gov/dmr/comfish.htm. 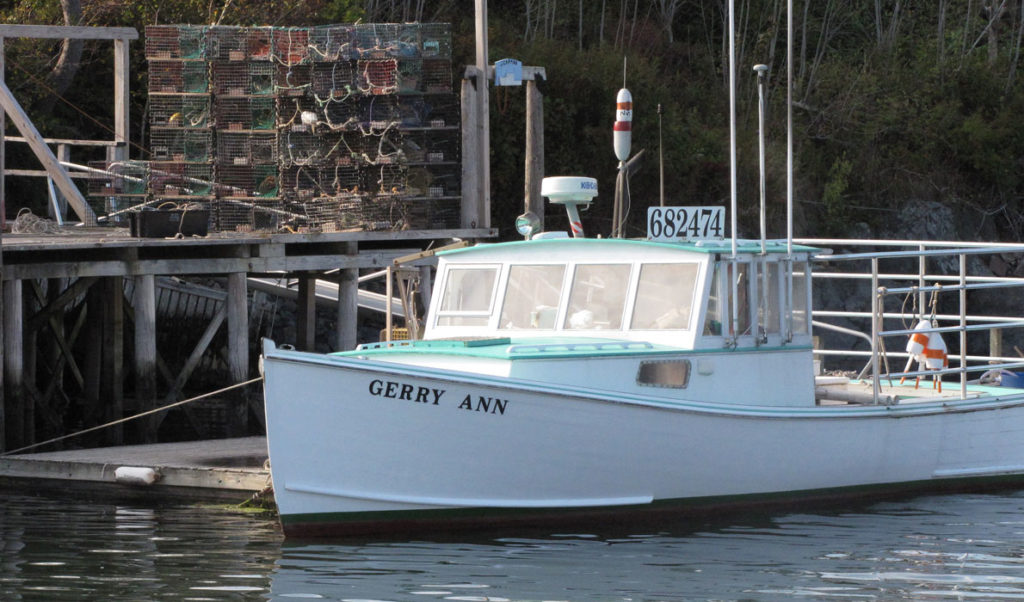 The Gerry Ann in Bunker Harbor.