MONHEGAN PLANTATION — It’s a cliché fantasy we’ve all heard, maybe even indulged in ourselves—move to an island year-round, soak up the rhythm of the seasons, the quiet, the isolation, and write the great American novel.

Judy Weber—who writes under the name Judith Ponturo, her maiden name—moved to Monhegan year-round in 2006 after visiting the island regularly since 1990.

A retired fourth-grade reading teacher, she’s recently published her first collection of poetry, Cutting the Grass with Scissors—Monhegan Poems. But there’s nothing cliché about the work.

True, it’s clear island life has seeped into Weber’s mind and soul, as the 60-plus poems reflect. But each word meditation, each wry, wistful, sad, playful or philosophical observation is not about place. Instead, the poems, most in the five- to seven-stanza range, take the reader inside. The settings, however unique to that offshore life, are secondary to their truth. And the truths, small or deep, are accessible and moving.

“Monhegan was not the only thing that moves me,” Weber said, reflecting on the source of the poems, “but this whole way of life was something that moved me.”

So lugging “stuff” from the pier, dealing with living in an electricity “dead zone,” walking home from movie night in February, sweeping the never-quite-clean “fish house floor” and dozens of other island-specific references were fertile ground for conceiving poems.

But Weber aimed with each at a more universal truth, she explained.

“Anything can lead you to a universal,” she said, from mundane chores to confronting ponderous truths about life and death.

Weber, 68, grew up in various places, thanks to her father’s career teaching at universities like Yale and several others.

“I’ve always written poetry,” composing her first poem “when I was maybe 8 years old. It was terrible poetry,” she confesses with a laugh. An English major in college, she moved to Maine in 1968 and started a family. She taught for years in Orrington, near Brewer, and in the last five years of her career taught on Indian Island for the Penobscot Indian Nation reservation. There was no time for poetry.

“I was raising three sons and teaching, and when you teach, you kind of give it all away,” she said, though she did some writing on summer breaks.

After retiring, her sons encouraged her to write, and to publish that work.

“This was my springboard,” she said.

Her son Tom had moved to the island for work, then son Matt followed. Matt now fishes (his boat “Seldom Seen” appears in one of the poems) and operates Monhegan Brewery. Weber visited in summers.

“I fell in love with it,” she remembers.

Like Robert Frost, a New England poet whose place-based poems often used the landscape and local ways to lead the reader toward deeper truths, Weber’s poems are tied to that rocky island. And like Frost’s poems, her work is clear.

“It doesn’t have to be inaccessible to be profound,” she said. The poems in Cutting the Grass with Scissors indeed are accessible, yet, with surprising efficiency, take the reader to a place where contemplation is demanded.

You have to walk down the road

For milk or the fulfillment

a minimum of three conversations.

At least one will be unsettling

in either a vague

You will hear opposite interpretations

of the same incident.

When you return home,

the day will be different.

Your meditations will have left

of poplar leaves in wind,

or turned them from a shimmer

in the light to metaphor.

It will take an hour gazing at the ocean

Here on the hillside,

I’m writing poetry. Below me,

My neighbor has rented a jackhammer

and is building a retaining wall.

First, he brought in a bulldozer

to clear away the loam, loose rubble

of jumbled rocks beneath, and now

It’s hard work, the digging down,

the setting of the rebar into solid ledge,

the finishing with comely stones,

But he keeps at it.

constructing against the hill’s

Poems are born, she said, “When something amazes me. When I start, I’m not really sure where I’m going,” she said of the writing process. That was the case with “Tuna Nights,” one of her favorites.

“I was writing it for my son Matt, who adores tuna fishing, and suddenly it went somewhere else,” becoming a wild fantasy where tuna grow feet, climb into boats while fishermen sleep “in their squid suits of fluorescent pink and orange/dreaming their shocking dreams/of harpoons and Oriental markets…”

“Wheel Over That Piano” likens the unbidden return of past losses to Casablanca’s Ingrid Bergman walking into a nightclub, “and I’m drawn inexorably to sit down at the table/pay for the drinks.”

“You have to be willing to go to the dark places,” Weber said. “And that’s not easy.”

As is the case with any good writing, the work isn’t evident in the results—the poems read as if they were penned in a moment’s reflection.

Cutting the Grass with Scissors can be purchased on Monhegan at Winter Works or by mailing $14.95 to Weber at P.O. Box 42, Monhegan, Maine 04852. 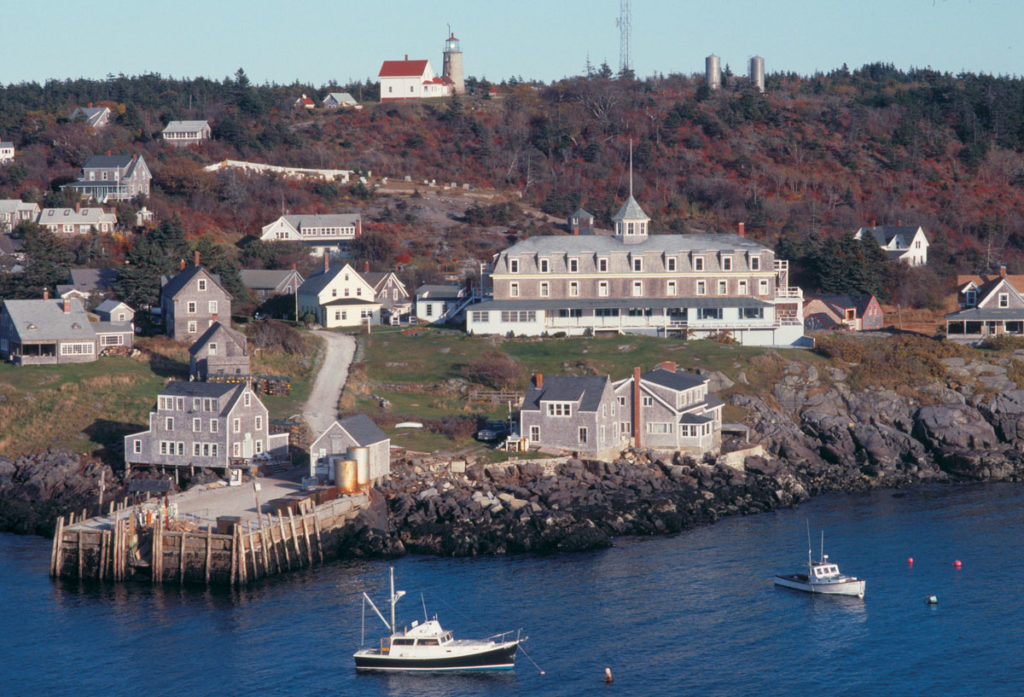