The past and the future of Portland’s working waterfront will be melded together when the Gulf of Maine Research Institute completes its purchase of Union Wharf from the Poole family, owners of the historic wharf since at least 1861, later this year.

GMRI announced the impending purchase on Nov. 15. Speaking a day later, the Institute’s president and CEO Don Perkins said the parties hope to complete the transaction by late December.

No sales price has been disclosed, but it is likely to be high, given the demand for waterfront property in Portland. City tax records show a total assessed value of $8,727,200 for the approximately 6.7-acres of wharf, related shorefront, and a 51,000 square foot building.

Perkins said the purchase price would be paid with cash and the proceeds of mortgage financing from “a commercial lender with a very strong reputation and presence here in Maine.”

GMRI had that lender lined up before it submitted an offer for the property. “We had to,” Perkins said. “We were competing against other, well-endowed bidders.”

Meeting mortgage payments should not be an issue, Perkins said. Union Wharf has been “extremely well maintained by the Poole family,” has a “capable and eclectic mix of tenants,” and generates enough income “to service the debt and improvements.”

According to a statement released by the Institute to announce the signing of a purchase and sales agreement in March, the Proprietors of Union Wharf, led by fifth-generation owners and managers Charlie and Malcolm Poole, began looking for someone to take the property off their hands.

Union Wharf is Portland’s oldest commercial wharf, built in 1793. Family predecessors to the Pooles were involved as proprietors and owners as early as the mid-1800s.

After 160 years of ownership, the Poole family sought “a like-minded entity to carry on the tradition of maintaining a working pier and a working waterfront,” GMRI said in its statement. The family selected GMRI’s bid because of its commitment to steward the wharf as the centerpiece of the city’s working waterfront.

“We were not the highest bidder, but we paid a fair price and provided a stewardship commitment” to maintain the wharf for use by the maritime and fishing communities through a limited liability company GMRI will set up for the purchase, Perkins said.

“Union Wharf is a fully operating pier and working waterfront, and we’re going to keep it working,” Perkins said. That means GMRI has no present plans for new buildings on the wharf, though it might expand an existing building upwards “to accommodate marine and marine technology related businesses.”

That’s good news to existing tenants of the wharf.

Togue Brawn has run Downeast Dayboat, which sells freshly landed Maine scallops and other Maine seafood products, all over the country from Union Wharf for several years. She was pleased the wharf’s new owner will be the Gulf of Maine Research Institute.

“As a tenant on Union Wharf, I was concerned when I heard about the Poole family’s decision to sell, although I certainly understood their motivations,” Brawn said recently.

“I spoke with Charlie [Poole] many times over the past year or two as various buyers were considered and I was thrilled when I learned that the wharf would remain in the hands of an entity with a proven track record of working with and prioritizing the needs of Maine’s commercial fishing industry.”

That’s just the sort of response that Perkins and GMRI are hoping for. 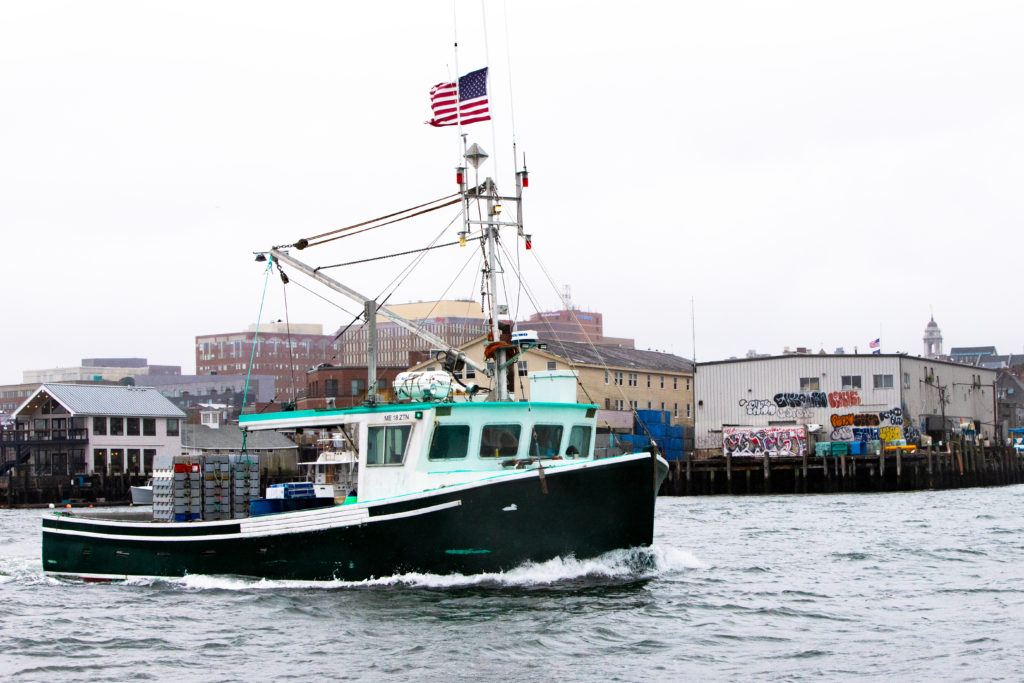 A lobster boat cruises past some of Portland’s wharves in late fall. PHOTO: JACK SULLIVAN