Who would want to wake up, layer up and sit outside in a circle with other students in the frigid cold air for 30 minutes, in silence, five days a week?

What about writing your college essay about the importance of your rubber boots? And, by the way, leave your cell phone at home? Hardly a recipe to attract your typical American teenage girl, and yet it does.

Coastal Studies for Girls in Freeport opened its doors Valentine’s Day 2010, on the 626-acre Wolfe’s Neck Farm in an 1850s farmhouse. It has a marine science and leadership focus and is the only all-girl semester school in the country, drawing students from around U.S. to the coast of Maine for the fall or spring semester of their sophomore year of high school.

The school works to let girls to pursue their aspirations in the sciences, a field which research shows they will excel in, if given consistent and purposeful encouragement.

Students work in small groups on a research project, gathering data, collecting samples on the coast, running the experiments and analyzing the results. They are able to interact directly with scientists and guest lecturers as they pursue a rigorous marine science based curriculum.

Kerry Whittaker, PhD, a marine science instructor and faculty chairwoman, has even developed a mentor program so that if a student has an interest outside of her scope of studies, that student can be matched with an expert in that subject area with whom they can make more specific inquiries.

Growing up in Portland, Maeve LeClair developed a fascination with marine life at an early age, which sparked her desire to be a marine biologist. When she heard about Coastal Studies for Girls, she raised a considerable amount of money for the tuition by sending out letters and generating a GoFundMe website. LeClair loved her semester at CSG, she said.

“It changed my life,” she said.

The school places equal emphasis on two core components of the curriculum, marine science and leadership, and students take five classes a week in both areas. The rigorous marine science semester-long course is equivalent to a full year of high school science.

Not all students who attend CSG want to study marine biology.

Olivia Hille, from Chapel Hill, N.C., attended CSG in the spring of 2016, and is interested in international relations.

Her research group at the school collaborated with a lab at Yale University to examine the genetic differences in populations of Alexandrium fundyense from Maine to Nova Scotia The growth of these organisms is connected to paralytic shellfish poisoning.

The experience gave Hille first-hand exposure to the complexities of our changing environment and what scientists are dealing with. She believes this will enhance her qualifications as she pursues her career goals. Her favorite part of her semester, though, was the sense of community at CSG, the warm supportive environment, and the leadership course.

Beginning the day with a quiet time is not unique to CSG. Quaker schools around the country utilize a quiet settling in for all ages. Jennifer Mathews, interim head of the school, said students learn to observe ecosystems as scientists in the field, while also learning to observe themselves in community.

The leadership class helps students examine the beliefs or ideas they have adopted or inadvertently accepted as fact. Some of these misconceptions are that success comes from talent, or that girls aren’t good at math, school officials say.

Mathews said students learn about the difference between a growth mindset and a fixed mindset. A growth mindset would emphasize the importance of effort and achievement over time, and that failures, or so-called failures, can be the critical bridge leading to achievement.

Students learn to “challenge their internal narrative,” she continued. Questioning and contextualizing belief systems prepares students to be able to challenge or change those that no longer work, thus giving them an essential ingredient to becoming a leader.

Clam worms, she said, were “kind of gross.” They had “eyelashes,” and were about seven inches long. “Some of them were iridescent, green, blue and silver.” It was her first time to see “open ocean,” and she loved being “a part of nature.”

The curriculum at CSG utilizes the humanities, literature and written expression to tie into and enhance the science education. Students are given frequent opportunities to present their work in front of the school, developing a deeper command of the material and greater self-confidence.

The experience of living in and building community gives girls a step-up in the transition to adulthood. They leave with the knowledge that they can be leaders and lifelong learners. 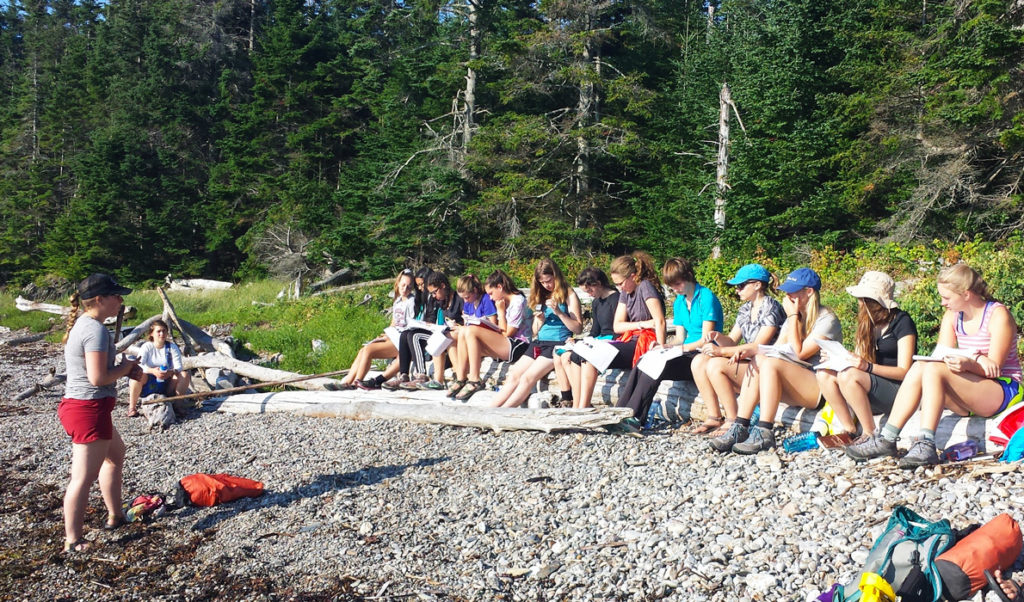 Students sit on the shore during a lesson.