Mabel Knowles Doughty was 93 when she passed away on Feb. 16 on Chebeague Island, the place she had called home for more than 70 years. Her contributions to the island were many, but her crowning accomplishment was her role as one of the five secession representatives who successfully convinced the legislature to allow the island to secede from Cumberland and become its own town in 2007.

Doughty charmed legislators with her intellect, quick wit and fish chowder. It was she who stood beside Gov. John Baldacci when he signed the bill to create the town of Chebeague Island. If George Washington was the father of our country, Mabel Knowles Doughty was the mother of Chebeague.

Born in the small Maine town of Shirley Mills on May 1, 1922, she spent her childhood ten miles south of Greenville, a world away from a Maine island. After high school, she moved to Boston to attend the YWCA School of Domestic Science. Upon graduation, she learned that West Winds, a small girls sailing camp on a Maine island, needed a summer cook. Always up for an adventure, she applied, was hired, and spent the summer on Chebeague Island.

She fell in love with the place and its people. It was during the early years of World War II that she met and married island fisherman, Sanford Doughty. They raised their daughter, Jackie, in the home where Sanford was born and died, and she learned the ways of the island from her mother-in-law, Minnie Doughty, and the extended island family. 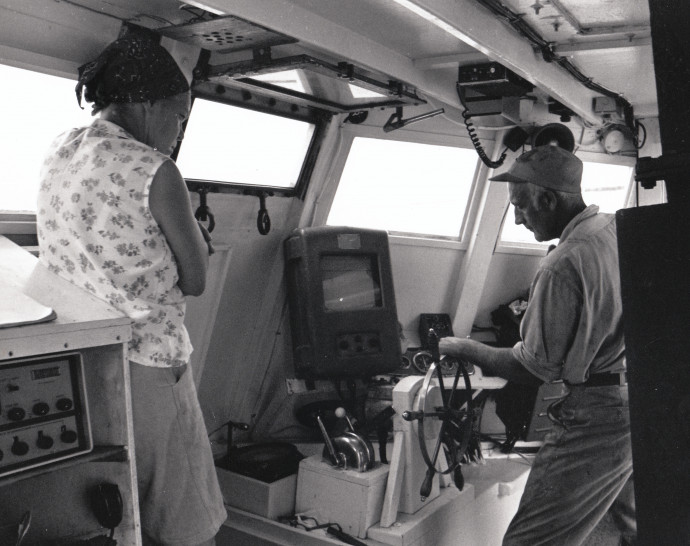 Mabel Doughty with her husband.

She quickly immersed herself in island activities and always looked to the future. When Chebeaguers worried that island servicemen wouldn’t return after the war, Doughty and others restored a home for an island doctor and lobbied for a new consolidated school. In the late 1950s she served on a committee that created fishermen-friendly zoning for the island.

Doughty was as at home on the stage of the Island Hall as she was in its kitchen, where she was known for her corned hake, fried dough and molasses cookies. She spent decades as treasurer of the Methodist Church trustees and was often found with a wallpaper brush or a paint can in hand, sprucing up the parsonage.

A voracious reader, Doughty served as chairwoman when the new library was conceived and built. She served as the treasurer of the Stephen Ross Scholarship for nearly 50 years and was a member of the Chebeague Grange. Because of her concern for the environment, open space, and shore access, she was one of the founders of the Chebeague and Cumberland Land Trust.

Doughty recognized that the children were the island’s future and felt it was important that they understood the island’s past. To that end, she supported the efforts of the Chebeague Historical Society to preserve the story of the island’s fishing heritage.

Some of the happiest times in her life were spent during the 1970s as “first mate” on board the Sirius, when she and Sanford fished in and around Penobscot Bay. In later years, when anyone asked Sanford if he needed help, he replied, “No. Mabel can do that.”

As part of their efforts to preserve shore access, Sanford and Mabel entered into a bargain sale with the town of Cumberland for about ten acres of upland and several hundred feet of white sand beach at Chandler’s Cove. They created a skating pond complete with a warming hut, skates and hockey equipment for island children, and served as role models for several generations of Chebeaguers, two of whom served with Mabel on what she called the “gang of five” to create the town of Chebeague Island.

At the time of her passing, Doughty was still an active member of the church trustees, the Chebeague Island Hall Community Center, and the town planning board.

Her energy, good humor, hard work and foresight made her a respected member of the Chebeague community. She leaves behind her daughter, Jackie Trask; granddaughters, Laura Trask, Amy Trask and Jenny Bunch; and great grandchildren, Mabel Tyler and Lila and Paden Bunch, as well as an island community of admirers. 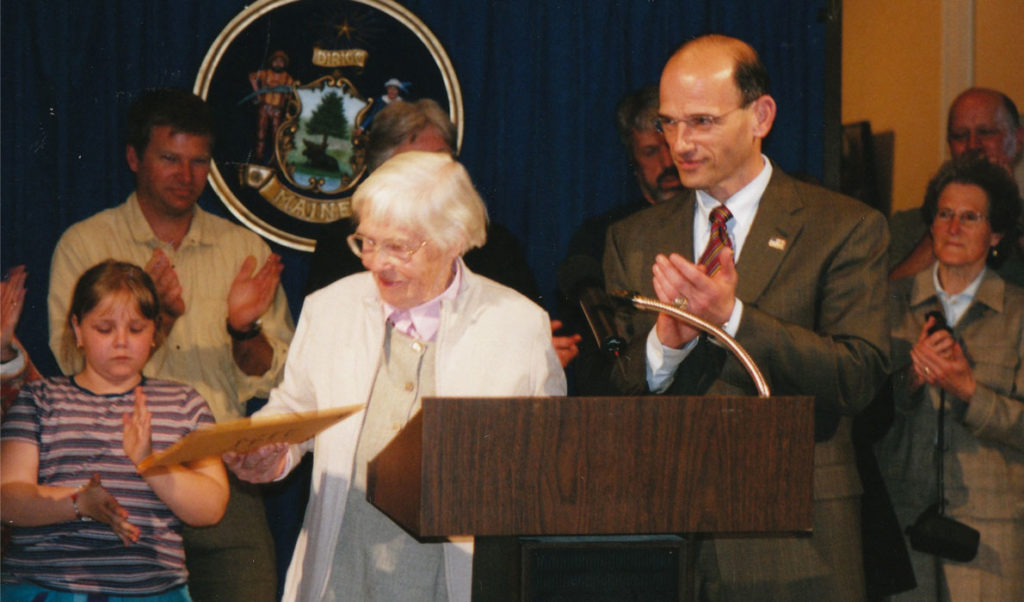 Mabel Knowles Doughty with Gov. John Baldacci when the bill creating the town of Chebeague Island was signed.