A young family passing through Machias stopped at a land trust office looking for local activities to fill their day.

“They had a site at Cobscook Bay State Park for just one night, and they wanted to know what to do in the area,” said Rich Bard, then the executive director of the Downeast Coastal Conservancy. “They were heading toward New Brunswick, Canada.” The family planned to spend a week vacationing in Canada.

“When we finished talking they said, ‘Forget it, we’re going to stay here.’”

That was a turning point for Bard, and part of his inspiration to create a new book he hopes will open even more eyes to the wonders of Washington County’s Bold Coast.

Beyond Acadia: Exploring the Bold Coast of Down East Maine is the first guide book of its kind, focused entirely on the coastline of Washington County. In it, Bard brings his years of experience as a wildlife biologist and land trust director to bear, expertly guiding readers toward out-of-the-way paddles, hikes, birding opportunities, and villages, while weaving in his firsthand knowledge of local culture along the way.

Bard lived in East Machias for 13 years before moving to Portland where he is now executive director of the Scarborough Land Trust. When it came time to sit down and write the book, he said living outside the region was helpful.

“Being able to come back to Machias and hike the trails with a Portland mindset really let me look at a few things differently,” he said. “It helped to consider how outsiders would see it, what information they would need to get.”

The number of tourists who visit the coastal Washington County region pales in comparison to the four million visitors drawn to Acadia National Park each year, a statistic Bard hopes Beyond Acadia will help to change.

“There are hundreds of thousands of people who drive through the Downeast area, we know that, going to and from New Brunswick, but they don’t know where to go and what to do,” said Bard. “Getting those people to pause and stay a while really helps.”

Tourists undoubtedly pass through the region because they don’t know what to see, but possibly also because business roads like Route 1 often mask its breathtaking coastline—some of the last undeveloped coastline on the eastern seaboard.

That the Bold Coast is both stunning and unspoiled is something Bard hopes readers take away from his book.

“Even in Portland, but particularly as you get farther south, there are islands of nature in a human-dominated landscape,” said Bard. “When you get past Ellsworth, it flips to exactly the other way, where there are only little pockets of civilization.”

But here, “There’s a road that runs through it, and there’s 30 miles of forest on both sides of the road. People might not know it, but I think people feel the difference.”

Beyond Acadia shifts the reader’s focus away from the roads and into those wild expanses. Bard said he chose a format that approaches the region holistically. “The message I was really trying to get across is that this is one region,” he said.

Beyond Acadia covers the region from Steuben to Eastport. But instead of taking it town by town, Bard crafted the book into chapters like “View!” which guides readers to the most scenic destinations, boat tours, or driving “trails,” such as the Downeast Fisheries Trail, the Ice Age Trail, and the Maine Sculpture Trail. With hundreds of photos, readers will have an easy time envisioning their adventures.

“Hike!” devotes 100 pages to the region’s best hiking. Here, Bard’s work with wildlife and land conservation shines through with tips on hiking etiquette, like walking through mud puddles rather than enlarging them by straddling the puddle’s edges, or following switchback trails rather than taking shortcuts up the hill.

“The switchbacks are there not only to make your climb a little easier, but also to avoid giving flowing water a direct path down the mountain, which causes erosion of the trail,” writes Bard.

In a chapter about the region’s history and people, Bard delves into the natural-resources economy still thriving on the Bold Coast, a type of economy which might be unfamiliar to—or go unnoticed by—visitors from more urban settings.

“For many locals, a year’s income is still made by patching together various types of seasonal work,” he writes. “This leaves the worker as an independent businessperson in a largely underground economy. From digging clams and bloodworms to harvesting blueberries to making holiday wreaths and a dozen other jobs in between, someone with a strong back and good health can earn enough money to modestly support a family.”

The groundwork for an improved tourism economy was laid, wrote Bard, beginning in the 1960s, when a group of people recognized the natural beauty and worried it would be bought by wealthy people who might prohibit public access. Government agencies, nonprofits, and individuals worked to purchase and conserve some of its most pristine acres.

“Today nearly 17 percent of the area of Washington County is permanently conserved in one form or another, and most of that guarantees public access,” the book notes.

That conserved land forms the foundation for a shift toward an improved tourism economy, which could bring new life to what is historically one of Maine’s poorest counties. Bard hopes it helps to lift more than the economy—he hopes it lifts the region’s sense of civic pride.

“Because I have such deep ties to the area, one of my hopes is that this book will open some local people’s eyes to all of the great stuff that’s out there.”

Beyond Acadia: Exploring the Bold Coast of Down East Maine is published by Down East Books and is available on its website, Amazon and in bookstores throughout Maine. 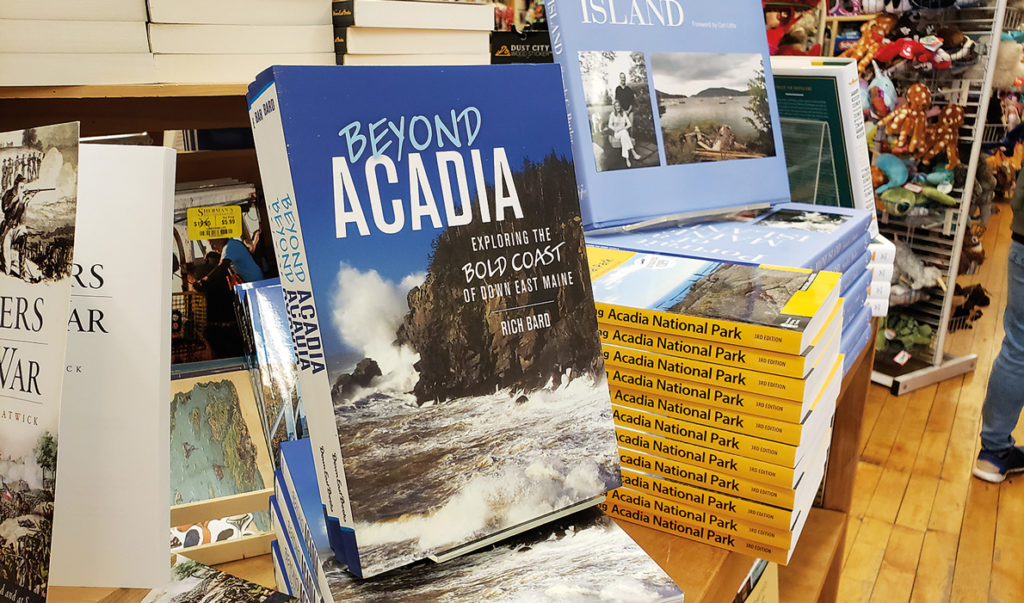 Beyond Acadia on display in a local bookstore. PHOTO: SARAH CRAIGHEAD DEDMON