Mild-mannered and romantically abandoned doctor Peter Silver is not accustomed to mystery or adventure, but finds himself steeped in both when he trades in his hospital scrubs for a rock tour bus. Enigmatic Dylanesque superstar Jimmy Cross needs a house call (a hotel call, really) for an unspecified malady, and his hints about knowing Peter’s mother years ago make it an offer Peter can’t refuse.

What a difference a day makes; Peter goes from rambling around his lonely Rochester condo to being the so-called “first physician embedded in a rock tour.”

That’s the set-up for Justin Tussing’s new novel, Vexation Lullaby. The story revolves around two poles; while Peter goes down a rock & roll rabbit hole, we also watch the tour through the eyes of Arthur Pennyman, who was so moved by a Jimmy Cross concert that he walked away from wife, daughter and job to follow the iconic singer, never missing a show and blogging about the minutia of each one.

Disclaimer: rock & roll novels are notoriously difficult to get right—the temptation is to load them with detail in an attempt to be authentic, and it rarely works. The good news is that this engaging book is not so much about rock & roll (any more than Jack Kerouac’s On the Road was about interstate highway travel), but about family, and loneliness, how we fill the holes in our lives and what we’ll do to get by.

Tussing has to construct a history for Jimmy Cross, filled with lyrics and album titles and history, and just when it starts to get top-heavy he shows his craft (and craftiness) by turning it like a möbius strip and using it to illuminate our fixation with stardom. Arthur Pennyman can describe the subtle differences in set lists and songs from every gig on the never-ending tour as if he looks at life through a jeweler’s loupe, and that only changes when he looks up long enough to notice a woman who can offer him something more real and substantive than loving a tiny figure on stage bathed in the spotlight.

Peter Silver is the story’s heart, a decent man who gets blind-sided by circumstance. As the lone figure not invested in the machinations of stardom and the rock business, he tries to be a competent caregiver, tries to keep his balance, and tries to untangle his connection to Jimmy Cross and his troubled son, Alistair.

There is a cinematic quality to the scenes, and a poetic sense to the vivid descriptions. The dialogue is sharp and often sweet, and Tussing walks the tightrope between melancholy and humor and never falters. The main characters avoid caricature; they are flawed and lovable and guard their secrets.

Read this book; Justin Tussing is an ace storyteller, and the story’s big heart beats like a kick drum.

Tussing also is the author of the Ken Kesey Award-winning novel The Best People in the World, and his short fiction has appeared in The New Yorker, Triquarterly and A Public Space, among other periodicals. A graduate of the Iowa Writers’ Workshop, he currently directs the University of Southern Maine’s Low-Residency MFA Program in Portland.

Dave Morrison is a musician and poet who lives in Camden. He is the author of Clubland. 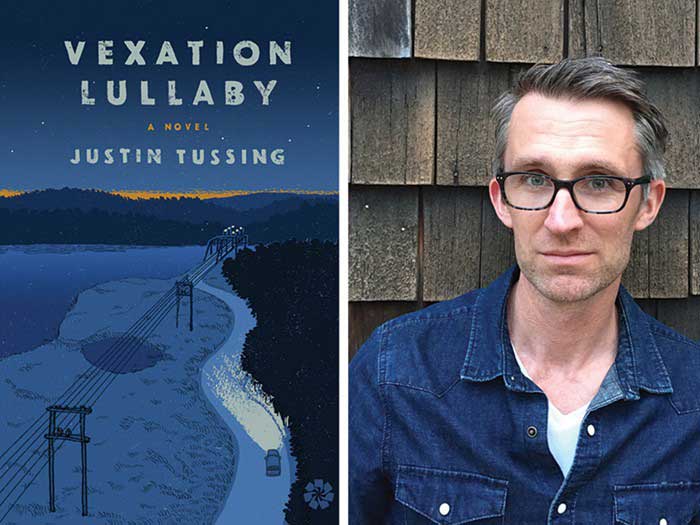