This fall, the Port of Halifax welcomed the largest two containerized cargo vessels to ever make a call on the Canadian eastern seaboard—the CMA CGM Brazil and the CMA CGM Panama. Each ship is roughly 1,200 feet long and 48 feet in height above the waterline.

Nova Scotians living on the coast may have to get used to seeing such large vessels, as a recent expansion of the Port of Halifax will allow for more of the largest container ships to call at the port.

Portland officials consider the Port of Halifax a partner, rather than a competitor, in the shipping industry.

In late October, Halifax port officials announced the completion of a construction project that expands the port’s South End Container Terminal to create a deep water berth that is roughly half a mile long, and which has a depth of roughly 52 feet. In addition, the construction project adds a mega-crane, the Super-Post Panamax (SPPX) crane, the largest in eastern Canada. Halifax is already a major destination for large container vessels, and the hope is that this expansion will help the port maintain its status in a shipping industry dominated by larger and larger vessels, according to Halifax Port Authority President and CEO Capt. Allan Gray.

“It will help ensure we remain a competitive international gateway which will provide tremendous benefit to national trade corridors, the local economy, and the Province of Nova Scotia,” Gray said in an official statement.

The expansion may help Halifax gain more market share in the North American container shipping market, but it will not necessarily cause the port to vault ahead of other leading North American ports. In 2018, Halifax ranked 21st in North American market share, according to JOC Group, Inc., a shipping and trade intelligence firm. By contrast, the New York-New Jersey port ranked third, and Montreal (Quebec) ranked 12th on the list.

Unlike cargo offloaded at some larger ports, some 60 percent of Halifax’s cargo is moved by rail to other destinations in interior Canada and the U.S. Midwest, according to Lane Farguson, who manages communications for the Halifax Port Authority.

In contrast, Portland’s port did not make the JOC Group’s top 25 list. Jennifer M. Smith, director of maritime development and public affairs for the Maine Port Authority, said Portland officials consider the Port of Halifax a partner, rather than a competitor, in the shipping industry. The two ports share calls from the same shipping line, she said.

However, the expansion may reshuffle the power dynamic for shipping ports in eastern Canada, according to Harry Valentine, a researcher with The Maritime Executive, a maritime news publication. There are four eastern Canadian ports that pursue business plans to compete for large-scale shipping vessels in the near future—Montreal; Halifax; St. John, New Brunswick; and Sydney, Nova Scotia. According to Valentine, Chinese funding for a planned expansion of the port in Sydney fell through, a casualty of the recent U.S.-China trade war. In addition, there has been some political disruption with ownership of the rail connections to the St. John port, he said. This means that the completed expansion is perfect timing for Halifax.

“Halifax has potential to become more attractive as a port of call for the mega-size container ships,” Valentine said.

Eastern ports are continuing to expand and improve, however. For example, the port of St. John is in the midst of a $205 million (CAD) project to consolidate two port terminals to expand to accommodate more mega-container vessels. Work on that project is expected by 2023. 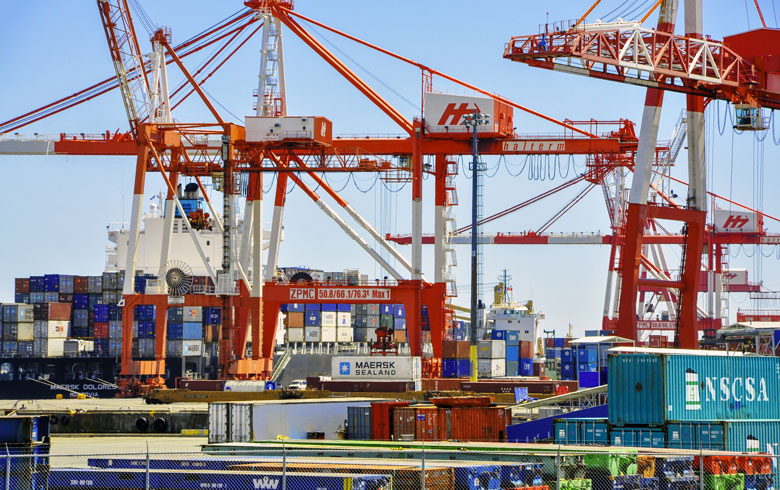 A close-up of infrastructure at the Port of Halifax. JOANNE DALE/STOCK.ADOBE.COM