Bruce Fernald recently traveled to the Napa Valley to attend the 17th Annual Worlds of Flavor International Conference and Festival at the Culinary Institute of America. He participated in a seminar with Sam Hayward and Cara Stadler, two Maine chefs, who were cooking lobster in various forms.

Bruce was there to answer questions about lobsters from the fisherman’s point of view, and to make connections that would help in future marketing of Maine lobsters.

Before he left, I said, “I wonder who you’ll know on the plane?” The question sounds far fetched, but it’s really not. People with a connection to the Cranberry Isles just seem to run into each other, unexpectedly, in random places.

Bruce called when he got to California, but no, he did not know anyone on the flight. However, the next day I received a FaceBook message from Derek Sarno, who used to be a chef at the Islesford Dock Restaurant and who once spent a fall as Bruce’s sternman on the Double Trouble. It was a photograph of Bruce and Derek, arms around each other and huge smiles on their faces. In this case, Derek was the one to ask, “What are you doing here?”

At the end of May I’ll be going to my 40th college reunion. What are the chances I’ll run into someone else who has been to my little island? I would be more surprised if it didn’t happen. Right now I have reached my column deadline with a huge case of writer’s block so I will take a cue from Derek’s and Bruce’s coincidental meeting. Below are parts of a column from June 2010. Seeing it again feels like running into an old friend, unexpectedly, because the stories are some of my favorites.

A “Cranberry connection” typically occurs in one of three forms:

1. You are away from the island, conversing with someone you never met before, and you discover that you have each spent time in the same tiny spot off the Maine coast.

2. You are away from your island home, usually quite far away, and you run into a fellow islander.

3. You are home on your island, and someone you know from your previous life shows up and asks, in total amazement, “What are you doing here?”

The stories of Cranberry connections are many, but I am limited in relaying them by the size of the column. Helen and Richard Dudman suggested I get in touch with Sue Trotter, knowing she had several of these stories. It was hard to pick just one.

Anne Trotter, daughter of Sue and Mike, was an exchange student in France in the 1980s. Her host family invited some friends to dinner who had recently toured New England. When they brought their photo album to show to the American student, Anne opened it up to see familiar scenes and faces from her summer home in Islesford.

When Trevor Corson was a student at the Beijing Normal University in China in the late 1980s, he was asked to reserve the guest room in his dormitory for two College of the Atlantic graduates who were traveling through. They had never met each other, but the connection was prearranged through a mutual friend. What was not prearranged was the Cranberry connection. When Trevor mentioned his summers spent on Little Cranberry Island, Emily exclaimed that she had just been hired to be the teacher there in the fall.

Dan and Cynthia Lief’s nephew, Eric Cooper, recently worked as a chef in Antarctica. When Barbara Stainton took a cruise to the bottom of the world last winter, she was served some delicious brownies after a meal. Her waitress commented that the recipe was from a place in Maine called the Jordan Pond House. Barbara told the waitress that she was from Great Cranberry Island and had been to the Jordan Pond House many times. Though he was not there that day, the waitress insisted that Barbara come into the kitchen to see a photo of their chef, Eric, from Little Cranberry Island.

One summer day, as Susan and Chris White were sharing a lunch at the Rusty Anchor on Great Cranberry, they noticed a woman wearing a Middlebury College sweatshirt. They told her that they had both gone to Middlebury, and she said that her husband had gone there too. Though they hadn’t kept in touch, it turned out that the husband was one of Chris’s fraternity brothers.

I have a similar story with my friend Susie McNamee. We had not kept in touch after college, but met unexpectedly on Islesford 30 years ago when she and her husband rented a summer house. We have been close friends ever since.

One time, when Ashley Bryan was waiting for an elevator at a hotel in Greece, he realized the woman in front of him, waiting for the same elevator, was Soula Bennett, from Islesford. (She was the person from whom Ashley later bought his Islesford home.) Judith Timyan stopped in at Ashley’s Islesford house one day when he had a visitor who had grown up with missionary parents in Africa. Judith had experienced a similar childhood, and as the two women talked, they discovered they had known each other as children.

Islanders share a knowing nod when we talk about these Cranberry connections. The serendipitous stories become folklore. They confirm for us what we already believe, that the center of the universe runs straight through our five-island town.

Does that sound far-fetched? Consider this: In 1987, Jo Aase was driving from California to Maine to teach at the Islesford school. Somewhere in the Midwest, she stopped to stretch her legs at a rest area, and met a man who was also taking a break in his travels. He asked Jo where she was headed and she replied, “Maine,” to which he responded, “Where in Maine?” Jo said, “Oh, it’s a really small place, Little Cranberry Island. Have you ever heard of it?”

The man, named Mel Spoffard, smiled and delivered a dry and most unexpected response: “Born there.” 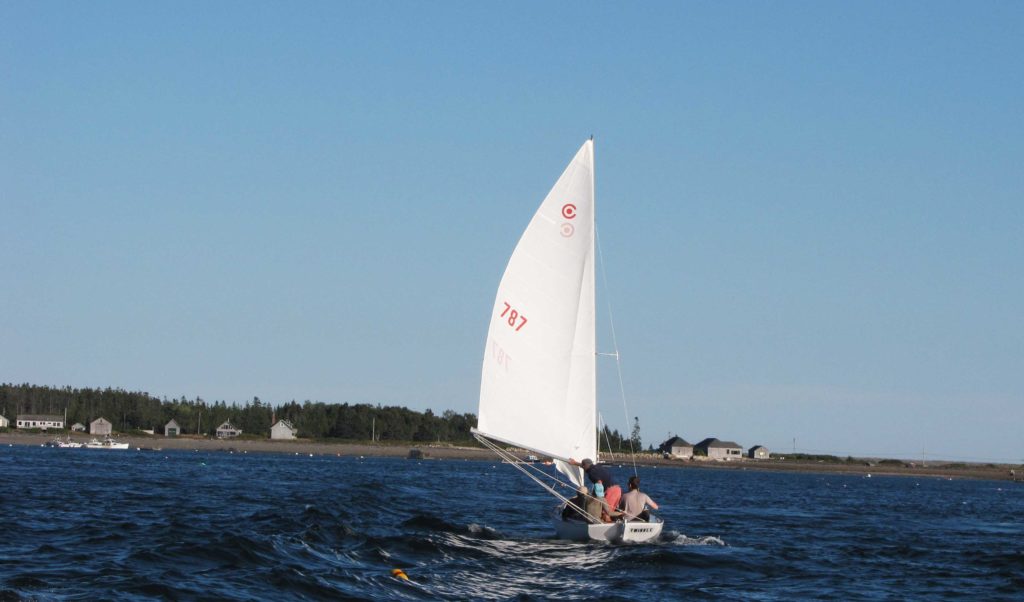