The centennial of the founding of Acadia National Park being celebrated this year has presented an occasion for a diverse array of reflections on the history of Mount Desert Island. By way of a terrifically engaging installation, which will be on view for the next two years, the Seal Cove Auto Museum is, fittingly, presenting “Auto Wars: Then & Now.”

The “then” part of the title refers to the so-called Automobile War that took place on Mount Desert Island in the early part of the 20th century. With the advent of motorcars, the island was divided on whether they should be allowed. The war was related to class—the wealthy rusticators were against autos, preferring horse and carriage, while the year-rounders were for them—and to geography: Bar Harbor and environs forbid them while villages in the western half of the island welcomed them.

Evidence that the locals eventually won is found in the “now” part of the exhibition: the modern-day dilemma of too many cars in Acadia. Several days last summer the summit of Cadillac was closed because of gridlock. As Jill Goldthwait, former state legislator from Bar Harbor and a columnist for the Ellsworth American, put it: “Cadillac Mountain is turning into the Velveteen Rabbit, so beloved that all its fur is being loved off.”

Through well-written and designed interpretive signs set every few yards among the museum’s remarkable collection of vintage cars (and buggies, motorcycles and other vehicles), the visitor is provided with both sides of the issue, past and present.

The organizers have come up with some telling images and quotes to highlight the first battle. One vintage postcard showing a buggy being tailgated by an automobile carries the legend “TOOT ‘n’ be Darned,” an early expression of road rage. And here is Selectman Abiel O. Curtis speaking at an Eden (now Bar Harbor) town meeting in 1906: “Them devil carts are injurious and run over hens and raise up ructions generally.” 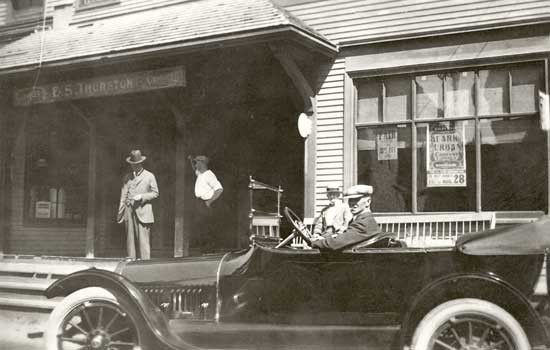 Arthur Somes at the wheel of his automobile at the First Odd Fellows Building, Southwest Harbor in 1915, photograph by Malden Art Company, from the Southwest Harbor Public Library Digital Archive.

Two touchscreens offer opposing but interconnected viewpoints on the current situation. Several Acadia officials, including Park Planner John Kelly and Cultural Resources Program Manager Rebecca Cole-Will, along with Stephanie Clement, conservation director at Friends of Acadia; Earl Brechlin, editor of the Mount Desert Islander; Paul Murphy, Island Explorer general manager; and others offer their perspectives. Among the issues discussed: loss of funding for the park, lack of parking, and, as Brechlin notes, the ever-lengthening tourist season and the sheer “intensity of visitation.”

The Island Explorer, the free seasonal propane-powered bus service launched in 1999, was considered to be something of a silver bullet, but it has been struggling to keep up with demand. In 2014 it carried more than five million passengers and reached its capacity limit—9,000 riders—on several days.

Visitors to the museum are invited to share their stories, ideas and solutions regarding the car problem on a large blackboard. One inventive individual illustrated his proposal for zip-lines with a sketch of a cable running between two park peaks. Another remedy, if you will, is presented as one enters the museum: an electric vehicle charging station sponsored by the Rotary Club of Bar Harbor.

“The biggest single challenge facing Acadia now is our popularity,” the park’s superintendent Sheridan Steele told Mainebiz last July, shortly before his retirement. His successor, Kevin Schneider, who took up the position in late January after similar stints at Grand Teton National Park and White Sands National Monument, has his work cut out for him in this centennial year when the number of visitors is predicted to surpass past records of more than 2.5 million.

The first automobile war inspired the oil magnate John D. Rockefeller, Jr., to build the carriage road system in the park—more than 50 miles of auto-less roads. A transportation plan is in the works to deal with the present war. For many island residents, that plan can’t come soon enough.

The Seal Cove Auto Museum is open Monday-Sunday, 10 a.m. to 5 p.m. from May 1 to Oct. 31. For more background on the Great Automobile War, see William Horner’s “From Horses to Horsepower: Mount Desert Island’s Ten-Year War for the Automobile” in Chebacco, the journal of the MDI Historical Society. A listing of other activities planned for Acadia’s centennial is available here: www.acadiacentennial2016.org. 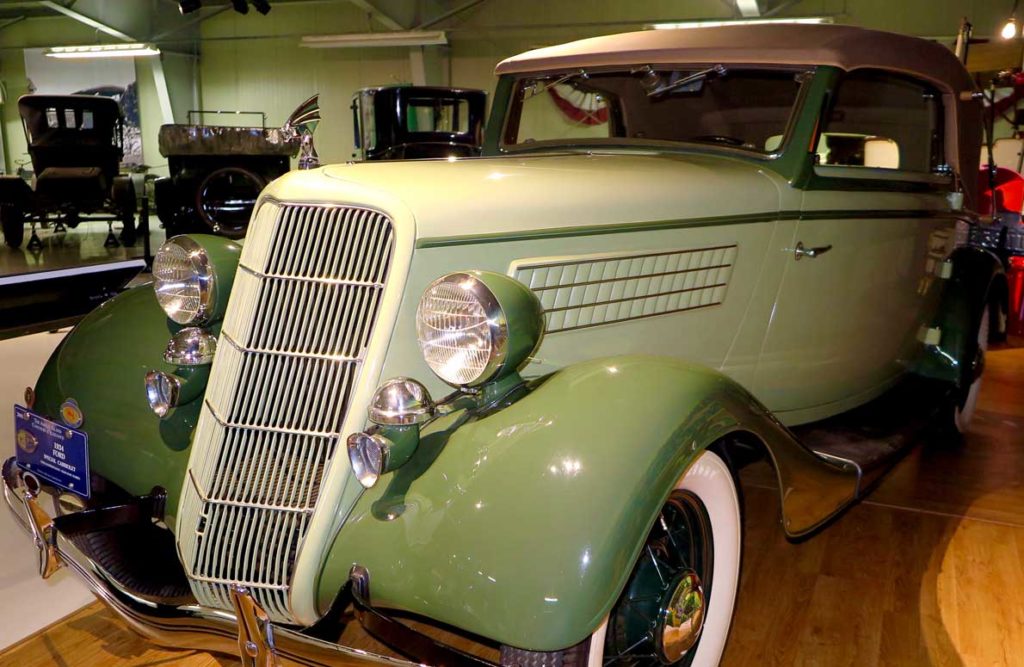