Recently, three days spent on the mainland prompted ponderings about what it would be like to live and eat there. For 30-something years now, I’ve eaten three meals a day on-island, the vast majority of them home-cooked by myself, or friends and neighbors. The exceptions are a handful of restaurant meals, some at a place no longer in existence; the occasional one at a local café; or a catered meal once in a blue moon at a wedding or reception; and take-out pizza. Even bean suppers at the Mason’s Hall count as home-cooked food.

So on my mainland trip, I had a couple of meals out and prowled grocery stores hunting down provisions, realizing how easy it is to find food there. Food is ubiquitous: not just restaurants and donut shops, but in drug stores, gas stations, and even Reny’s. Closed now until summer, snack shacks, hot dog or lobster roll stands and their ilk appear, scattered across the landscape like glacier-dropped boulders. In settled areas, one passes an opportunity to eat every few seconds. Not so on island.

This time of year, two grocery stores and the Community Center café are all we have offering grub. In summer, add a sandwich and ice cream shop, and a take-out stand at the ferry. Weekly, year-round on Thursday, the local church offers lunch to all comers. Aside from pop-up chances like bean suppers, potlucks, or the Sporting Club’s burger nights, or their famous steak and fried clam dinners, fundraising dinners for class trips, and the Community Center’s offerings—all occasional, we are on our own for breakfast, lunch, and supper.

It’s probably a good thing, at least for me. See, I love calamari and fried clams, and would never make them for myself at home, so when I eat out, sure enough, there’s a pile of fried food before me. During my mainland stay fish tacos sounded awfully good, and three fat chunks of fried haddock nestled into flour tortillas appeared.

A turkey, cheese, avocado, and bacon sandwich really appealed, and came with a pile of potato chips. Now I’ve never met a potato chip that I didn’t love, but I don’t buy a bag full very often because I’d eat them, every one, in a sitting and half. But since they come with the sandwich, well, you know, you can’t let food go to waste. (It went to waist instead.) So you can just imagine what it would be like if this happened more than six or seven times a year.

In fact, my practice when eating out is to order only things I would never go to the trouble to make for myself at home. The exception is exotic salads. On this trip, I had a really wonderful spinach, shaved brussels sprouts, dried cranberries, and blue-cheese salad which fortunately inspired me to assemble a grand salad of my own when I got home.

Overall, I pondered what it would be like to bail on meal prep and eat out instead. Sure, there are nights when I don’t feel like cooking. That’s when leftovers are handy, or peanut butter and jelly sandwiches. If I have an evening alone, a rarity, I indulge in a Single Woman’s Dinner: a glass of wine and a bowl of popcorn.

On the mainland though, there are all these wonderful opportunities: imagine being able to take out top notch Thai food almost any time? Or a lobster roll without the mess from boiling and picking out lobster? I’d be broke, so island-eating is a money saver.

Or what if you could dash to the store until late in an evening if you lacked an ingredient or felt bored? Out here we have to make that calculation before closing time, and don’t think for a minute you can make a last-minute decision about pizza either. We live in plan-ahead land. So islanders are magnificently well organized or else (well, maybe some of us aren’t). It is an excellent discipline.

Lacking ingredients and possibly disinclined to dash to the store means we are adept at ingredient substitutions and flexible in cookery, wonderful strategies for sustainable living.

So you can certainly eat take out on Islesboro and indulge urges. At the Island Market there are all of Looney’s Luscious this and that’s, but I have to get in my car and drive “all-the-way-down-island” and blow the best part of a half hour. Durkee’s has ice cream (and liquor.) But I don’t get the ice cream urge usually until about 8 p.m., two hours after Richard closes.

Those are the saving graces of island limits.

Sandy Oliver is a food historian who writes, gardens, and cooks on Islesboro. 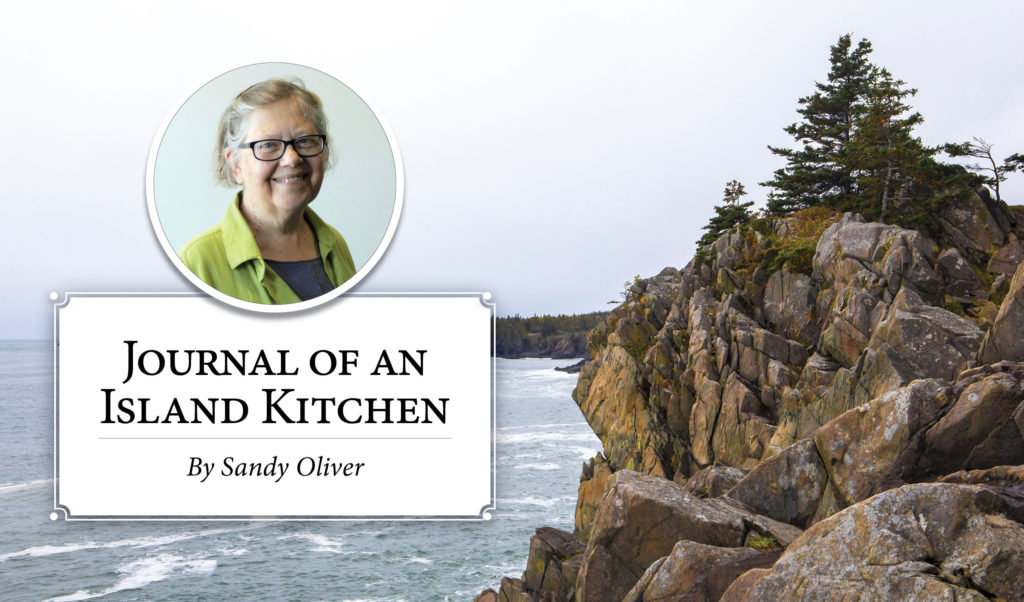