There’s the potential for accidents that could result in death, injury or vessel loss.

Then there’s the sheer pain many live with every day, a result of the bodily stresses they endure doing this hard work.

Hazardous working conditions, strenuous labor, long work hours and harsh weather make commercial fishing one of the most dangerous occupations in the United States. Nationwide from 2000-2009, 504 fishermen died on the job; 165 deaths occurred on the East Coast, according to the National Institute for Occupational Safety and Health, a department of the Centers for Disease Control.

In Maine waters, the risks are illustrated by a recent tragedy off Matinicus Island. In November 2014, bad weather flipped and sank the fishing vessel No Limits. The captain survived but two crew members were never found. Earlier that year, a mariner was found dead in the water alongside his unmanned fishing boat off Vinalhaven.

In 2013, a Rockland captain died when his vessel sank in transit from Massachusetts. In February, the Maine State Ferry Service pulled crew members from 38-degree water when their 35-foot fishing boat, home-ported in Matinicus, sank off Monroe Island.

According to NIOSH, about 60 percent of deaths were caused by drowning following a vessel disaster such as sinking, capsizing, or fire, in which the crew was forced to abandon ship. Severe weather caused about half of vessel disasters.

Speaking at the Maine Fishermen’s Forum in early March, NIOSH research scientist Jennifer Lincoln said the agency works to mitigate hazards. Finding that gear entanglement is a significant factor in injuries and falls, the agency engineered an emergency “E-stop” for hydraulic deck machinery; the device locks any winch in place to limit the severity of entanglement. A hatch and door-monitoring system helps prevent progressive flooding, and a monitor recognizes degraded stability due to liquid slosh in a vessel’s tanks and holds.

“The Paul Revere story of survival is about three people who fell into Bristol Bay and survived two-and-a-half hours in the cold water because of their life jackets,” Lincoln said.

While the potential for catastrophe is a fact of life for the industry, so are everyday aches and pains.

“Where do you guys hurt? ‘Basically everywhere.’ I hear that a lot,” said University of Massachusetts College of Health Sciences project manager Scott Fulmer, who has conducted a multi-year work-environment study of lobster fishermen in Maine and Massachusetts.

“It shows how prevalent it is,” he said.

Fulmer threw the question to fishermen in the audience. Many mentioned wrist, elbow and shoulder pain.

“Back pain,” said one man. “It’s kind of one-sided because you end up working either straight up or to one side. You end up a little bit lopsided.”

“I regularly see a chiropractor,” said another man. “He puts everything back in its place and it’s good for a while.”

Among the comments on Fulmer’s survey were mentions of herniated, ruptured and slipped disks; hip and knee replacements; tendinitis, rotator cuff surgery, limited range of motion, sciatica, and ankle and foot numbness.

“I take two Advils before morning coffee and two more before sleep,” wrote one man.

Fulmer asked fishermen to consider solutions by analyzing the risks of each segment of their work, and thinking about ideas to reduce the risks. Suggestions included an outrigger ramp to reduce the lift distance involved in hauling traps, and a sprocketed hauling block to roll traps over the rail.

“Probably breaking the traps over the rail is one of the worst things,” said Bar Harbor fisherman Jon Carter, interviewed separately. Carter has arthritis in his hands, carpal tunnel syndrome in his arms, and two artificial hips, all of which he thinks is likely job-related.

“The boat is rolling, you’re leaning against rail. You try to adjust. But you can’t stay home because it’s choppy or your hands hurt. When it’s time to head out, you head out.” 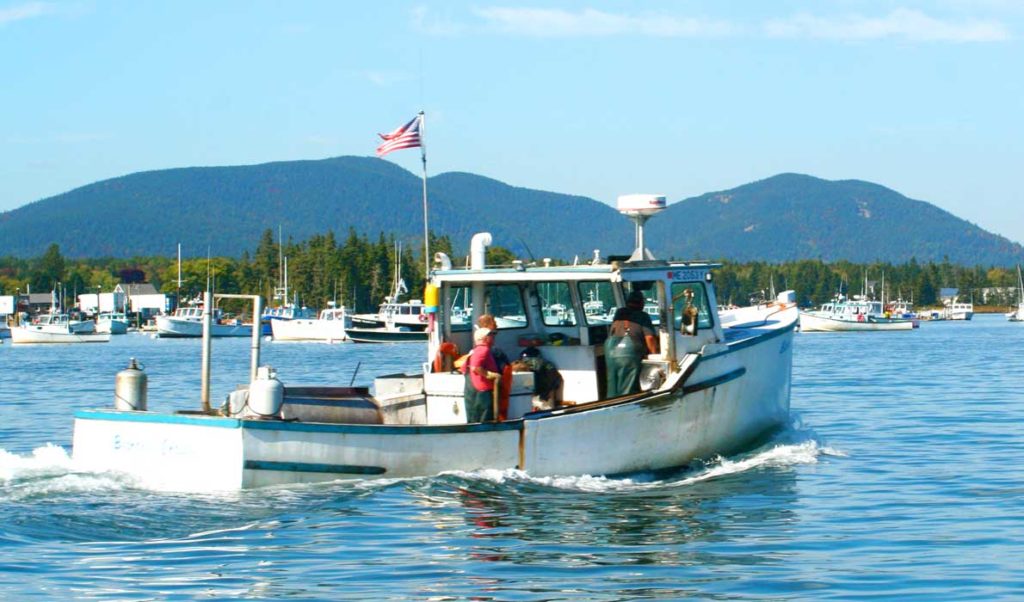 Fishermen head back to Bass Harbor after a day hauling traps.