You may be forgiven for thinking a 65-foot-tall tower on a Casco Bay island has something to do with warning mariners away from danger. But the tower in Brad Brown’s side yard on Long Island actually was built to harm mariners. Well, invading mariners, anyway.

At any rate, it’s not a lighthouse.

Brown and his sister, Towanda Brown (more on her first name later), have inherited the property their father purchased in 1971, which was part of the broad and heavy military presence on Long Island—and the other Casco Bay islands—during the World War II years.

The concrete tower, Brad has learned from extensive research, was used for radar equipment, and though it is 65-feet tall now, in the early 1940s it included another 25-foot wooden section at the top, so it reached 90 feet above the ground, which, not coincidentally, was on the highest point on Long Island.

That wooden superstructure was designed to look like the wooden water towers that proliferated in small communities in the early 20th century, an effort to have it passed over as a target by German artillery.

The location also was chosen because it allowed the Army to triangulate with installations on Luckse Sound and Hussey Sound.

Their father was a career Navy man.

“He was all over the place,” Brad says. “He went in in 1946,” and served in Guam and China, among other Asian settings. At one point, there were five U.S. ships on China’s Yangtze River, and the Browns’ father was on one, and four of his cousins were on the others, though none knew it at the time.

Their mother was from Pennsylvania. Towanda was named for a Native American friend of her mother’s there.

Brad and Towanda, who grew up in Portland, remember the property being overrun with vegetation in their early years there. They camped out in a cement block building they later learned had housed a generator during the war years, powering the radar equipment.

Years after purchasing the property, the family discovered a small concrete structure behind the houses, which became their father’s workshop. Walking back to the house from this building, Towanda stumbles on a small concrete pier, one of many such remnants of the military’s presence that have surprised the Browns over the decades.

Brad, a retired carpenter who lived and worked in Portland for 30-plus years, settled on the family’s island property permanently in 1989. Towanda, who does ceramic art, lived for a time in Tuscon, Ariz., but moved to the island in 1995.

The block buildings are barely recognizable as former military structures, but there’s no disguising the radar tower.

“My Dad always told me it was a Naval observation tower,” Brad says, “but I found out it was Army.”

Their father used it for storage, a practice the family continued until recent years.

“We finally got it cleaned out,” Brad says.

He learned the Army abandoned the property in 1946, but it wasn’t sold to a private owner until 1966. Graffiti dates back to 1963, he notes.

“We spray-painted out the more colorful ones,” he says.

The concrete walls are 13-inches thick, and reinforced with steel. The concrete floors are 5-6-inches thick. There is flaking here and there, but the structure is in remarkably good shape.

“It was designed to be bomb proof,” Brad explained. “My dad’s cousin carried 90-pound bags of cement” during its construction.

The tower includes seven “floors,” with circular stairs linking the first four. The next three are accessed by wooden ladders. There’s a large diameter pipe that Brad deduced accommodated a coal stove, there are metal pins in some places which must have been used to mount tripods for binoculars, and electrical conduit remains throughout.

The top floors have wide, narrow openings, which would allow the men to peer through without letting much interior light escape.

“When we first moved down here, my mother used to go up there,” Brad says, gesturing to the open, top level, “every morning with her coffee.” The family gathers there to watch Fourth of July fireworks.

Among the cast-off gear he has found were 5-foot-long carbon rods, which he learned were part of arc lights that could illuminate a target 15-miles out to sea.

Brad believes he once observed a drug deal from the tower, as two boats rafted up and passed something from one to the other.

“They weren’t lobster traps,” he says.

Another time, he saw a nuclear submarine surface.

These days, it’s Portland’s EMS radio equipment that relies on the tower, not radar.

There have been lighter moments, too. Towanda remembers Casco Bay Lines loaning the island school thick braided rope which was used to replicate Rapunzel’s hair from the top of the tower, when the children were reading the story.

“Next year is the 50th anniversary of us owning the property,” Towanda said, and the family wants to mark it by inviting island and other local historical societies to visit. “We want to celebrate what my Dad did.” 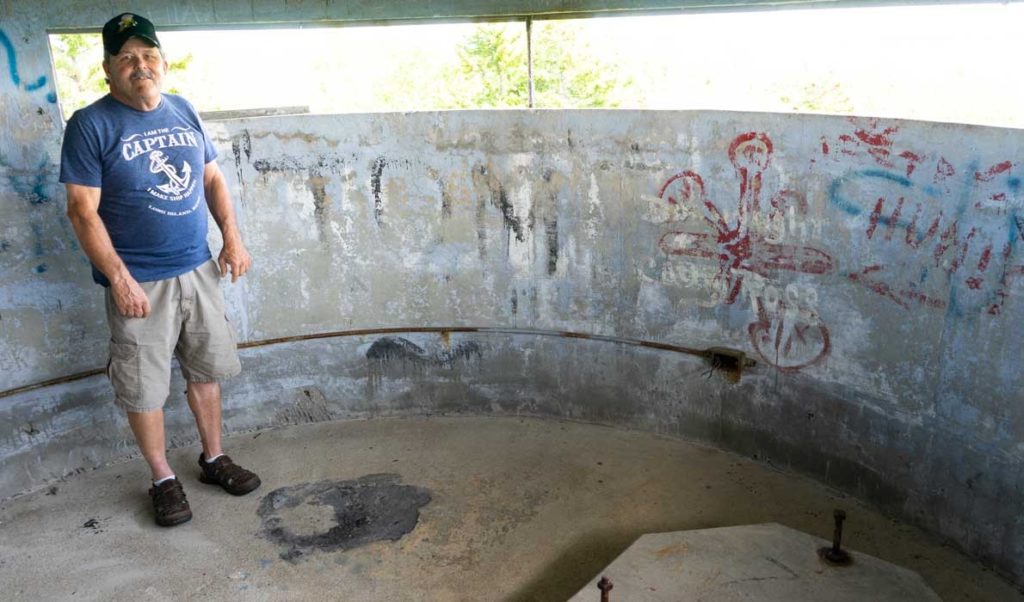