There are oft-told stories that long ago lobsters were food fit only for the poor, that the prisoners at the Maine State Penitentiary (and apprentices in Boston) refused to eat them more than twice a week, and that they were so plentiful and poorly regarded that farmers used them for fertilizer. I’ll bet almost anything that you have heard these stories, and probably even read them, too, in books written by very smart people. These facts are what everyone knows about lobster. Alas, they just aren’t true. And you are probably wondering how I have the temerity to say that.

Even though our Homarus Americanus is its own species, the English settlers who arrived here in New England, recognized them as similar to Homarus gammarus and knew they were edible. Usually, cooks boiled their lobster and picked out the meat to incorporate into dishes with other ingredients for dishes like lobster pie or lobster sauce for fish, though for a short while the Plymouth colonists subsisted on lobsters alone (but with no butter because no milking animals yet) while awaiting supplies from England.

In the early 1700s lobsters were valuable enough that they were caught in Long Island Sound and shipped to New York City to be sold live, and in Boston, where they were boiled shortly after being caught and peddled in the streets ready to use.

It didn’t take long for lobster stocks to be fished out in Southern New England, and by the middle 1800s Boston vessels visited the Maine coast to buy lobsters for the Boston market. Maine fishermen supplied them as they do today. Within a few years, canneries opened along the coast and lobster meat was one of their products.

Empty claws and carapaces can get awfully stinky and fly-ridden so canneries were glad when farmers picked up lobster refuse for manure. But it was startling to city-slicker visitors to Maine who assumed farmers were plowing lobsters into their fields.

While lobsters can be held for a while in pounds, there were instances when the market was soft and there was nothing to do but cook and eat them. No market, no sale. Eat it yourself. At least one island family I know caught lobsters to sell, and cooked and picked a lot of unsold lobster. They sold the meat when they could, or put it in the freezer when they couldn’t, and got kinda sick of them. Familiarity breeds contempt.

And it is true that some Downeast school kids growing up in the early and middle 20th century might have traded a lobster sandwich for a baloney one at lunch time. If their family were subsisting off lobsters they could catch (or clams they could dig) not because they were selling them, it was a sign that they didn’t have money; “boughten” meat was vastly preferable and less embarrassing.

Meanwhile, what about the prisoners, apprentices, and poor house inhabitants rejecting lobsters? The problem here is that no one ever told this story about lobster until sometime in the 1900s. Before then, it was told about salmon. (I haven’t found any evidence that it was true about salmon either.) Here is a typical passage from Islesboro and John P. Farrow’s History of Islesborough published in 1893: “Tradition informs us that the salmon were so plenty [sic] that the first town poor protested against being served with salmon more than twice a week.” The wording is the same in stories about Lowell, Mass. factory workers living in boarding houses, lumbermen in the Northwest, apprentices in Boston. I’ve collected these stories from about a dozen different places. None come, however, with proof cited: the line is always “tradition has it” or “it is often said.”

Plain fact is that most rationed diets on land and sea in the 1700s and 1800s relied on salt pork, salt beef, bread, potatoes and once a week in some places, salt cod. No lobsters in sight.

What gives? The stories about salmon cropped up in the context of great abundance then in decline; the point being made was that it was under-appreciated in earlier times, and this emphasis was aimed at increasing its value. Ditto lobster in the 20th century, as it became more of a luxury food.

Where there is smoke, though, there is fire and I suspect that the hot coal that is generating all the smoke around salmon and lobster is the claim that an English fishmongers’ guild made a rule that the guild apprentices could not be fed upon fish more than a certain number of times a week. Figures. If you are a fishmonger and have unsold fish to whom would you feed it? 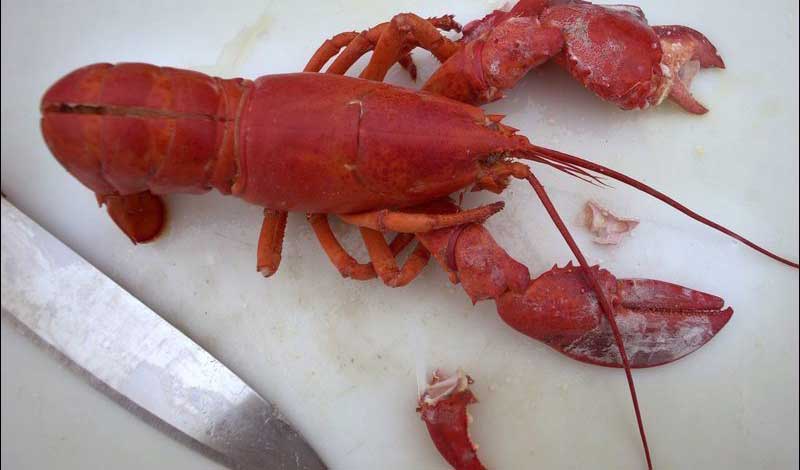