On the surface, Jon Keller’s novel Of Sea and Cloud is a beautifully rendered story of a small Downeast fishing village losing its traditional way of life.  Keller worked as a sternman aboard the South Wind, Oscar Look Jr.’s boat out of South Addison for two years. He learned well the language of fishing and the pulse of small town life.

As someone who has lived in small Maine towns for over 40 years, it’s clear to me that Keller gets it  He loves these people in all their strength and frailty. These lives have significance, and take on meaning beyond the ordinary. The power of the sea in all its fury, mystery and grandeur is mirrored in these lives.

The novel is a tale of two families. The sons of Nicolas Graves, Bill and Jonah, grieve their father’s death, drowned at sea. They only want to continue fishing as their father taught them. Nicolas’ friend and co-owner of the local lobster pound, Osmond Randolph, uses his neighbor’s death as an opportunity to push the Graves family out of the business.

Instead of the traditional coop arrangement, Osmond is working with a Boston fish dealer to sell lobsters directly to an overseas market.

“We will not survive, not on this coast, not without evolving. This is bigger than you and me,” Osmond declares to Nicolas. It is a future at whatever the cost. The Graves family sees this change as a loss of the way of life they’ve known for generations. Keller describes it in the detail of Jonah fishing after his father’s death:

The water shone alabaster in the slanted end of fall light. His father’s big yellow buoys lay on the waves like beacons… As a child before his mother’s death he’d spent days and days aboard his father’s boat with his eyes trained on the water in search of those yellow buoys. Then later when the Jennifer was handed down from Nicolas to Bill to Jonah those yellow buoys became a sign that his father had been there and would be there again. The buoys were footprints that made the ocean familiar and knowable.

Everything is changing in the world Of Sea and Cloud. As Jonah goes out to “the Leviathan,” the family fishing ground, to haul in his dead father’s traps, he discovers Osmond had set a line of red buoys over his father’s. “His father’s body was still lost at sea and Osmond Randolph had already set traps on the Leviathan and if there is one thing a fisherman does not do it is this.” Jonah cuts every one of Osmond’s buoys.

Of Sea and Cloud is a novel about a lobster war, but there is more going on beneath the surface. “Something just ain’t right,” Nicolas’ friend Virgil declares to his wife Celeste, “It just doesn’t add up. Nic dying like that, and now Osmond trying to fish the Leviathan, and Jonah cutting him off. It’s just not right.”

Even the tide is higher than usual. This is a world unraveling around the two families. And everywhere in Keller’s haunting book things are more than they seem. A drowning, a feud between fishing families, a threatened way of life take on cosmic proportion as even the tide threatens “to flood the whole operation.”

Keller’s novel captures this sense of mystery, that deep below the story’s surface of people trying to find their way in a changing world, there is “the Leviathan,” something unsearchable and inescapable. The sea is sacred in Of Sea and Cloud; it is foreboding and terrible. It is beautiful and life giving and all the characters in the book are shaped by it.

In an early scene, the Graves family and their friends gather in a cold rain at a fenced cemetery for Nicolas’ funeral. Bill and Jonah meet Osmond Randolph who is to “minister” Nicolas’ funeral. “His black hair hung over his shoulders and his black robe clung to his chest and clung to his arms in the ripping wind.” Standing before the empty casket, Osmond speaks: “Man is of sea and cloud, and like sea and cloud we are not long separated from the Lord.”

I asked Keller to help me understand the title and Osmond’s eulogy.

“For Osmond, the ‘Lord’ is all encompassing as water. Osmond’s notion is the Lord being in the wind, in the tides, all around us, but most of us are unable to witness.”

Betrayal and loyalty, love and greed are meaningful in the larger scope of things, if we have eyes to see. To witness.

At the end of the novel, with Jonah and Osmond facing one another in a life and death struggle, it is Osmond’s world that collapses. The old ways of independent, local fishermen will give way to a global market of which the lobster pound is only a cog in a very large wheel. But Keller sees the world differently, affirming the old, sometimes messy and unpredictable ways of a community of people living, loving and working together. As the novel concludes Jonah takes his boat home:

He dropped his fist onto the throttle and spun the wheel. The bow of the Cinderella arched through the waters until it faced north and eclipsed the vacant lighthouse on Two Penny. Beyond Two Penny was an island called Burnt and within the grip of Burnt Island stood a slat-wood dam and a riprap causeway which together formed a lobster pound. He sailed north for home and the diesel engine echoed but Jonah heard only the gentle slide of water like voices calling and his eyes searched the mist that sprayed from the chines as if he would find a loved one there. He felt he understood something although he could not say what so he knocked his fist against the boat’s bulkhead as if to reaffirm the center of the earth.

Jonah sails north toward home. He’s going back to his life. He has much to figure out about his home and all the people who live in it; much to consider about the big world out there. He drifts above the Leviathan Ground. “Clouds came with the sun.”

Maybe here, at the end, what Keller is telling us is that the depths to which we are inextricably linked, if we are careful to listen, will show us the way home.

After reading Of Sea and Cloud, I went to visit the “central character” of the book, the Marsh Cove Lobster Pound. The novel is dedicated to the late Oscar Look Jr., who co-owned the pound.

I liked the way a fisherman remembered Oscar: “Waiting in the middle of the rush,” when all the fishermen line up to sell their catch at the wharf, “usually worked up all the fishermen so they had a rotten attitude when they tied up.  When the South Wind came to the float, no matter the wait, Oscar always had a smile on his face and asked how your day was going.”

On a clear, cold winter morning, with the wind blowing stiffly out of the south, I met two brothers who work at the pound and asked for a tour.

“We have thousands of pounds of lobster in the pound,” I was told. “We put them in in November and hope to sell them in the spring when the price is up.“ Joe explained the process of using a drag connected to a small boat to go back and forth to collect the lobsters.

“It takes a group of men to pull the drag onto a lobster car and then pack them into crates. Occasionally, we catch a flounder.”

We walked along the narrow, icy dam separating the pound from the bay.  “What makes all this complicated and a lot more work is when it gets cold and we have to cut the ice off the pound,” brother Andrew explained. From our vantage point on the dam where we looked out to the sea, the Ladle and Nash Island were all that was separating us from open ocean. 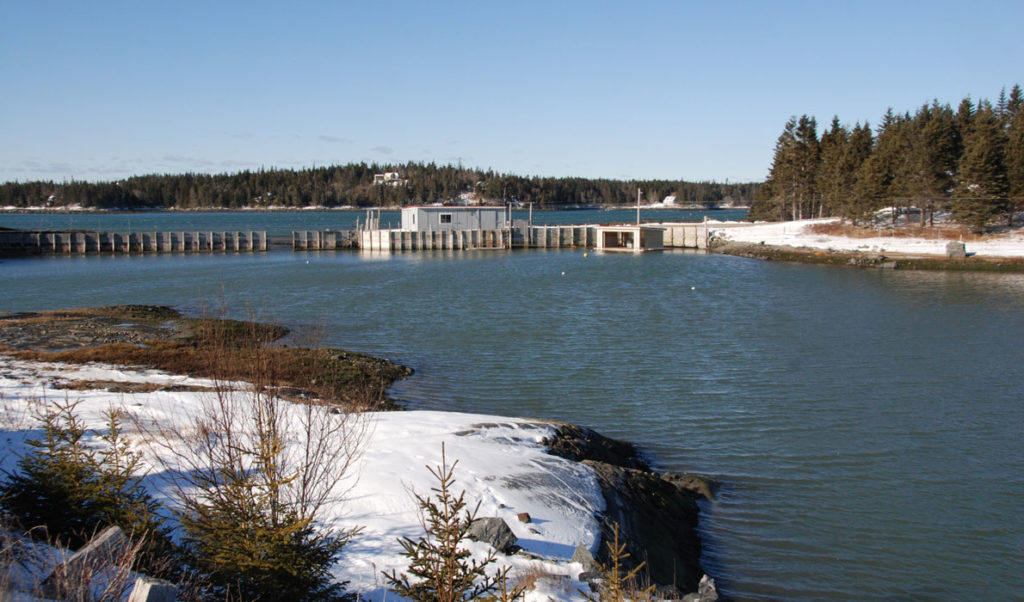