On Swan’s Island, Mary L. (Mamie) Torrey was an inquisitive and determined soul.

Born in 1876, her mother died when she was 9. Unable to attend more than three years of school, she was homeschooled by her father, a mariner who lost a leg in an accident at sea.

She learned to play several musical instruments, including the reed organ, Hawaiian guitar, mandolin, ukulele and violin. Making up for her lack of formal education, she read many of her children’s high school textbooks, even learning to read French.  At 80, she bought a motor scooter to ensure her independence.

In the late 1890s, Torrey was in her early 20s and decided to take a mail-order photography course. In recent years, her grandson Randal White discovered the results when he went through his mother’s estate, finding glass negatives and prints of Swan’s Island in the early 20th century, along with his grandmother’s camera, development equipment, and supplies.

White donated the trove to the Swan’s Island Educational Society. Now a selection of those images, and the photography kit, will be part of its exhibit “44.1522 Degrees North-68.4433 Degrees West, Here is Home: Life in Pictures, 1890–1945.”

The exhibit is part of the Maine Photo Project (mainephotoproject.org), a collaboration throughout 2015 of more than 30 museums, galleries, historical societies and other nonprofits exploring the state’s role as a magnet for photographers. Organized by the Maine Curators Forum—responsible for the Maine Print Project (2006) and the Maine Drawing Project (2011)—themes cover historic and contemporary topics ranging from “The Poetry of Maine’s Fog, Rain, Snow and Ice” to “Visualizing Home and Homelessness,” and techniques such as “Contemporary Camera-less Works” and “Painting with Light.” Project-wide programs include professional development workshops, open portfolio days, a lecture and symposium, and a crowd-sourced display.

For Swan’s Island, the exhibit has particular significance as the society, aided by fellows with the Island Institute (publisher of this newspaper), continues to rebuild historic archives after a 2008 fire destroyed the Swan’s Island Library. Running June 15-Sept. 15 at the new library, the exhibit includes depictions of the island’s three self-sustaining villages—Atlantic, Minturn, and Swan’s Island, often called The Harbor (there was also a wooded area called “The North”)—where occupations included fishing, boatbuilding, quarry work, fish-packing, coopering, tailoring and running the cod liver oil plant.

Side exhibits include a collection compiled by newspaperman Tom Hindman who, for the island’s centennial in 1987, reproduced old photos from the collections of community members. Searsport-based Penobscot Marine Museum photo archivist Kevin Johnson located an enlarger for exhibit and use. And schoolchildren have taken on themes such as recreating images found in historic photos.

“There’s a lot of change happening out here right now,” said Candis Joyce, the island librarian. “But the year-round community is still connected to its history. I think seeing it on a wall really accentuates a sense of community—who we are and what we need to think about as we look to the future.”

Another island participant in the statewide project is the Monhegan Museum, mounting “An Enchanted Camera: Bertrand Wentworth’s Photographs of Monhegan Island.” Running June 24-Sept. 30, the exhibit showcases the photographer’s eye for the island’s beauty, from crashing waves to the tranquility of moored sailboats. A native of Gardiner working in various occupations, Wentworth’s success managing a Michigan quarry allowed him to resettle in Maine in 1913 and concentrate on photography.

His early-20th-century Monhegan images reveal a sensitivity to shifting light and weather as he captured life on an island 12 miles out to sea. The museum owns about 32 Wentworth photos, and chose 10 for the exhibit, said curator Jennifer Pye.

“We thought the Maine Photo Project was a good opportunity to showcase his work, which is rarely given the recognition it deserves,” she said.

The Island Institute’s Archipelago Fine Arts Gallery in Rockland is highlighting island, coastal and working waterfront images from the 1890s through the 1950s in its exhibit, “The Alluring and Enduring Maine Coast.”

Running June 26-Aug. 9, these are 30-plus photos selected from the Eastern Illustrating and Publishing Co., Elmer and Ruth Montgomery, Ed Coffin and other collections housed by the Penobscot Marine Museum.

“We wanted to focus on people who seem to have intriguing stories in a wide geographic area,” said gallery manager Lisa Mossel Vietze, who credits Johnson for his extensive assistance. “There’s a man setting up his makeshift barbershop on a boat out of Thomaston, and women in their finery on Matinicus, getting a lobsterbake lunch ready for fishermen. These are strong images with characters who call to the viewer from the two-dimensional space, asking us to listen to their stories.”

Prints will be available for sale. A public reception is on Friday, June 26, 5-8 p.m. 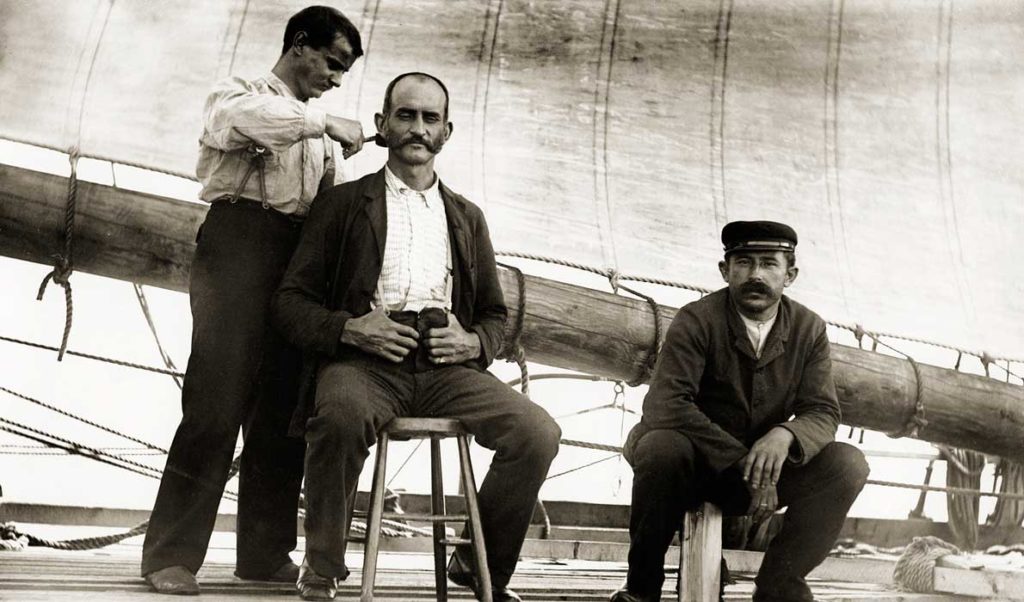 A barber trims hair aboard a vessel out of Thomaston