Scott Nearing may be best known in coastal Maine as an inspiration in the back to the land movement. He and his wife Helen and their book Living the Good Life are cited by hundreds—if not thousands—who came to Maine in the early 1970s, seeking a more simple, rural life.

But not as well known is that 100 years ago, Nearing was indicted on charges of sedition; specifically, undermining the U.S. efforts in fighting what came to be known as World War I.

A jury ultimately acquitted Nearing, who described himself as a pacifist, despite the indictments that came from his writings against what he saw as corporate greed and war profiteering. Some have attributed Nearing’s historic acquittal in New York not only to the government’s weak case in U.S. vs Nearing, but also to the refusal of two jurors in particular to find him guilty.

Greg Joly, a homesteader and researcher, said in a July 29 presentation at the Good Life Center in Harborside, the former Nearing home, that the two jurors were Sam Gordon, at the time, 55, and Solomon Marcus, 65. Gordon was an importer and exporter and Marcus was a retired merchant. Both were born in Russia. Marcus had been in the U.S. since 1868.

Joly explained that Marcus had “seen the entire arc of industrialism, the Gilded Age and the age of the plutocrat.” Interviews with jurors revealed that Gordon and Marcus “held out the whole time.”

As the district attorney summed up his argument against Nearing in February 1919, Joly said, “He said it was very difficult to get a jury that is to the government’s liking in these ‘cosmopolitan areas.’ In a conservative world, ‘cosmopolitan’ has been translated to mean ‘diverse.’ He was basically saying you can’t trust foreigners.”

The pair of jurors “get a gold star for keeping Scott out of jail,” Joly said.The government also had a weak case, the underpinnings of which were challenged in the courtroom by Nearing himself.

He also had an impartial judge, Julius Mayer. Mayer made it clear to the government that he believed every defendant was entitled to a full hearing in court.

Scott Nearing was an unlikely radical. Born in 1883 into a prosperous coal mining family in Morris Run, Penn., he graduated from the University of Pennsylvania, eventually earning a doctorate in economics from the university’s Wharton School of Economics. Although Nearing was from a privileged background, his writings challenged much that had contributed to his family’s wealth.

He was dismissed from two university teaching posts—first at the Wharton School and then at the University of Toledo—for his speeches and writings. It was while teaching at the Socialist Party’s Rand School in New York that Nearing published an anti-war pamphlet, “The Great Madness: A Victory for the American Plutocracy.”

It was that pamphlet that resulted in his indictment under the Espionage Act for alleged conspiracy and obstruction to the U.S. recruiting and enlistment service. The indictment came down in April 2018, but it was not until February 1919, several months after the war in Europe had ended, that the trial against Nearing and the Rand School began.

The prosecution attempted to show that by writing against militarism, Nearing had illegally interfered with the government’s ability to recruit and conscript troops for its military activities in Europe. At the end of the trial, Nearing addressed the jury.

Nearing continued, saying: “The views that I have expressed in this pamphlet I expressed honestly. I believe they were right. The future will show whether or not I was correct, but under the laws, as I understand it, and under the Constitution, as I understand it, every citizen in this country has the right to express himself on public questions.”

Judge Mayer dismissed the first two counts of the indictment alleging conspiracy. After 30 hours, the jury found Nearing not guilty, but the American Socialist Party was found guilty on the obstruction counts and was fined $3,000.Joly said Nearing before, after, and during the trial was relentless in his views, and described his persistence as “breathtaking” at times.

Nearing’s core beliefs were that the public should own the factories, railroads, utilities, and natural resources, and that none of these could be held in a monopoly of private ownership. Capitalism, Nearing believed, was wasteful because it was consumptive and exploitative.

Not only did Nearing lose two university positions, but his textbooks were pulped by his publisher, MacMillan. On Sept. 12, 1917, the federal government raided Nearing’s home in Toledo. Joly said this raid was the first of a domestic domicile in the U.S.

“That’s how much they wanted him,” Joly said.  The tipping point was Nearing’s publication of “The Great Madness” pamphlet.  Joly said the trial was odd in that the defense and prosecution were amiable, often chatting while the court was in recess. Nearing was often seen hanging over the courtroom railing, engaging in those conversations.

“One of the things working in Scott’s favor was the end of the war and decompression in the populace,” Joly said.  Prior to Nearing’s trial many well-known radicals, among them Eugene Debs of Terre Haute, Ind., were imprisoned for years for speaking and writing about their political views.

Also, he said, Nearing was a child of the ruling class while Debs came up through the ranks of the working class. Joly said Nearing was professorial throughout the trial, taking notes, passing notes to his lawyer, arriving with a briefcase that he brought with him to the stand. At one point the entire offending pamphlet was read out loud. This took two hours with Nearing hunched over, following along with his own copy of the reading.

“Scott’s basic argument is that the reason we got into the war is because the plutocrats had placed their bets on allies and had put a lot of money and hardware into the war and were about to lose their shirts because of how Germany was doing,” said Joly.

The prosecution questioned Nearing’s opposition to conscription, the war, and the heavy-handed sale of Liberty bonds. Nearing said the attitude among employers was if workers did not buy a bond, they would lose their jobs.

“The Liberty bond guy was at the factory gate and the floor manager is there, watching,” Joly said.

Nearing, he said, quoted from a naval publication, Sea Power,in which it was said that the flag always follows the dollar, and that most modern wars arise largely from commercial rivalries. On the fourth day of the trial, Judge Mayer dismissed the two conspiracy charges, saying the prosecution had no proof. The jury later asked if it could separate Nearing and the Socialist Party in applying the charges. Mayer agreed. Nearing was acquitted and the Rand School was found guilty.

Joly said Nearing, who had faced up to 20 years in prison, continued with his radical stance.

“The man had bravery and he stuck to it and he argued his case well,” Joly said. Nearing and his wife, Helen, went on to homestead in Vermont and later Brooksville, where they wrote and lectured extensively on the virtues of the simple rural life.

Their Living the Good Life: How to Live Sanely and Simply in a Troubled World, published in 1954, became a bible for generations of homesteaders. 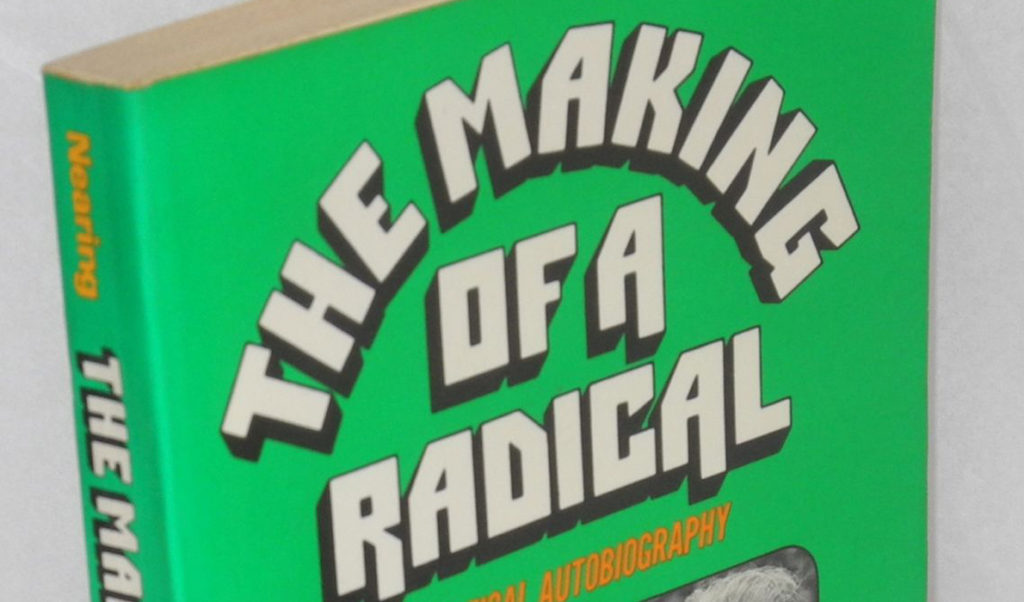