While the centennial of the founding of Acadia National Park is being celebrated this year all across the greater Mount Desert Island region, the Penobscot Marine Museum in Searsport has chosen the 100th anniversary of another event as the focus for its summer’s exhibitions: Post Card Day.

On April 19, 1916, Maine’s 50th governor, Oakley C. Curtis, a Portland native, issued a proclamation asking that all Mainers send a postcard to friends and family outside the state with the message “come to Maine.”

Under the umbrella title “Wish You Were Here: Communicating Maine,” the marine museum has seized on this creative boosterism to present several exhibitions highlighting its exceptional photography collection. For starters, “Historic Maine: A Postcard View” features images of the state from three postcard producers: Eastern Illustrating and Publishing Company in Belfast; Evie Barbour, who photographed around Blue Hill; and the Cunningham Brothers, who covered the Washington region.

The museum also gets in on the Acadia act. “Acadia National Park: A Postcard View” offers a tour of the park through scenic views from the Eastern Illustrating and Publishing Company collection. It should be noted that the aforementioned Governor Curtis hailed the establishment of Sieur de Monts National Monument, the precursor to Acadia National Park. In a letter dated August 21, 1916, he extended his “most sincere congratulations” on the “realization of a project at once so admirable and so desirable.”

Calling postcards “the Facebook and Twitter of their age,” the museum commissioned artist M.J. Bronstein to create a series of cards using photographic images from its collection. Bronstein designed the cards so that visitors can draw on them—and send them, in the spirit of that post card day of yore. Deltiologists, take note!

Finally, the museum wanted to organize a show of contemporary artists who would riff on photographs from the collection—a way to tie the past to the present and vice-versa. Instead of asking artists to produce new work, as guest curator I set out to pair vintage photographs with paintings of similar subjects in order to highlight “a continuum of place.”

The 18 artists in the show, who hail from across Maine, offer a range of interpretations of coastal subjects, from Philip Frey’s paintings of kids leaping off the dock on Great Cranberry Island to Nancy Morgan Barnes’s study of the bulk carrier Clipper Melody unloading at Searsport. Beach scenes by Joel Babb, Caren-Marie Michel, and Mary Bourke; renderings of fishermen by Susan Lewis Baines and Alison Goodwin; ships and sailboats by Linda Norton and Ben Lincoln; and West Quoddy Head Light by Jude Valentine are among the subjects covered. David Vickery, Jeff Loxtercamp, Tina Ingraham and Liddy Hubbell captured some of the most iconic motifs: the harbors of Monhegan and Stonington, the Portland pier, and the Bubbles in Acadia.

Artists were asked to write short statements about their sense of place. Karin Spitfire, former poet laureate of Belfast, offered two poems to go with her silkscreen of sardines. Writing about Marine 1, Winslow Myers, from Bristol, explained that the painting depicted him and his family on a sailboat on the Damariscotta River. He had grown up on this “magical river” and spent four summers on it fishing for lobsters. “I’m always amazed,” he wrote, “to see how little it has changed across the decades.”

Maine has changed a lot over the last century, but as this suite of shows at the Penobscot Marine Museum proves, “wish you were here” and “come to Maine” are timelessly relevant—on a postcard or in a Tweet.

“Wish You Were Here: Communicating Maine” runs through Oct. 16. “Maine: A Continuum of Place” will travel to the State House in Augusta where it will be on view Dec. 5 through March 3, 2017, as part of Maine Arts Commission Art in the Capitol initiative.

Carl Little and his brother David are the authors of the forthcoming Art of Acadia (Down East Books). 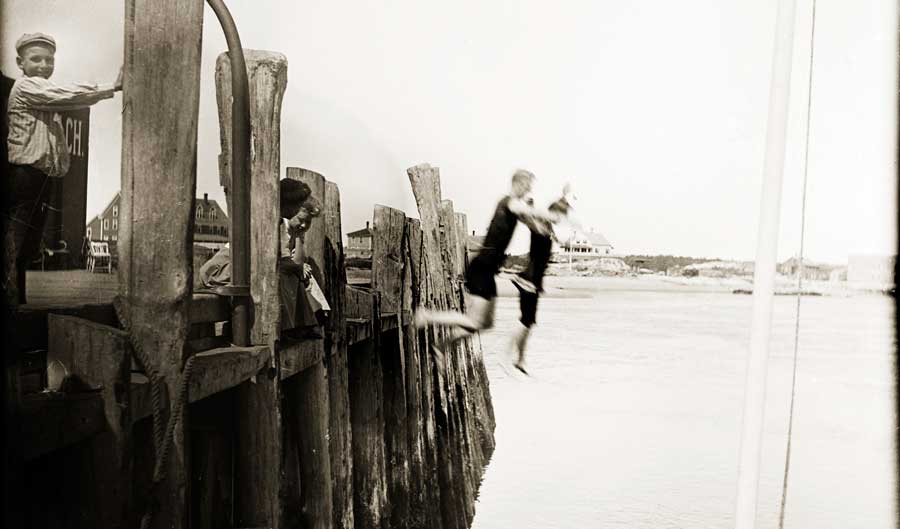 "Leaping off the Steamship Wharf