Over the last half century or so a number of major American practitioners of innovative verse have found a home and/or muse in Maine. The list includes George Oppen, Donald Wellman, Sylvester Pollet, Denise Levertov, Theodore Enslin, Constance Hunting, Robert Creeley, and Charles Olson.

Olson’s poetry was one of Peter Kilgore’s principal influences, we learn from his friends Bruce Holsapple’s and Dana Wilde’s affectionate and insightful foreword to Quarry: The Collected Poems of Peter Kilgore. In what they characterize as “part narrative and part lyric” poems, Kilgore tunes into the world, offering moments and descriptions keyed to the intimate and immediate.

The narrow format of much of Kilgore’s verse is the perfect vehicle for his “intricately measured voice.” He followed Olson’s lead, as outlined in the latter’s groundbreaking Projective Verse (1950), basing his meter on breathing and a free verse construction that worked through “sound and the linking of perceptions.”

In the opening poem, “Penobscot,” the shape of the verse as it unspools echoes that of its namesake river:

to a darkened crib

by an inland sea

the mystery of growth

Many of the poems move via these short passages of lyric observation. Here are some lines from another river-inspired piece, “Allagash,” featuring an evocation of moving clouds:

In a sequence called “Island Poems” Kilgore calls himself a “stenographer/of earth”: “I interview/the land.” His eye and ear are attuned to the world before him, to the “hollow/clatter/of small/rocks/caught/in the wave’s/rake.” His poems sometimes read like the record of a beachcomber appraising flotsam and jetsam on the shoreline.

Because of their stretched-out format, the poems are difficult to excerpt and so give proper justice to their deft compositional make-up. He can turn on a dime like Pollet or play with words like Creeley. A poem about New Orleans ends: “bayou/good bye/you/bayou babe.”

Kilgore (1941-1992) grew up in the Bayside section of Portland. Holsapple and Wilde describe an athletic kid who thrived in this neighborhood until urban renewal removed it to make room for Kennedy Park and the Franklin Street Arterial. That neighborhood and the family’s getaway on Long Island in Casco Bay appear in Kilgore’s poetry as touchstones.

The poem “Portland Renewal Authority” offers a remarkable run-on apostrophe-less description in lowercase of Bayside’s beloved establishments: “bing chous laundry,” “bob macks clothes for men,” “playland lined with pinball/machines deft nudge flip sharp crack of free game.” He follows this catalogue with signage he now sees on buildings, in caps, including this come-on: “IF YOU DON’T START/SAVING NOW/WILL YOU EVER START/SADDLE UP AND GO.”

After graduating from Portland High School, Kilgore went to Bowdoin. There one of his classmates, none other than William Cohen, future Maine senator and secretary of defense—and a poet—introduced him to the Beats, Jack Kerouac, Allen Ginsberg and company.

He married, started a family and lived and taught for a time in Connecticut before returning to Portland in 1970. At that time, he became a part of a lively poetry scene centered around a small literary magazine, Contraband. He would publish several books and appear in such innovative literary journals as The Café Review and Puckerbrush Review.

Whether writing about a trip to Bar Harbor or following a trail to Yellow Aster Butte in the North Cascades (the poet moved to Sumas, Washington, in 1987) or picking up a lost dime for an old woman in Congress Square or “dozing/into Maine/on the/red eye,” Kilgore manages to convey perception and place with a minimum of words. On the evidence of the poems in Quarry, we can add him to that roster of inventive poets listed above, with distinction. 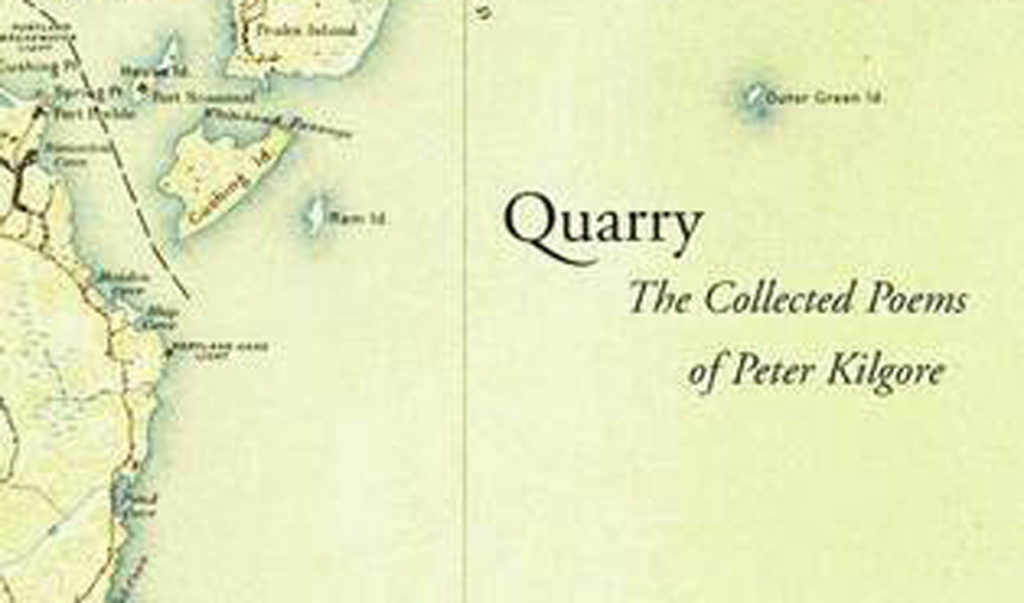