The cover of Carl Howe Hansen’s first novel presents some powerful allusions. The photograph by Peter Ralston features what we can assume is the book’s Pine Island, a typical Maine island of granite and spruce with raw exposure to the elements, a resistance to being tamed. Under its title, Destiny, an ominous subtitle warns, “How humanity’s arrogance will lead to nature’s ultimate response.”

Don’t imagine this as laidback summer reading. There’s an adrenaline rush to the whole thing, with its chilling scenario of technology and science run amok and humankind slugging it out over limited resources. It is not futuristic science fiction featuring killer robots or evil space aliens; rather, the premise seems possible, that a micro-organism could be engineered to “eat” oil and turn it into water.

The scientist inventor, Dr. Peter Petersen, imagines it as useful for cleaning up waterborne oil spills. But his bacteria, E07, is sold to Eradicoil, a corporation that sees its military applications—like “disappearing” the oil supplies of an adversary.

Out of his hands, Petersen no longer has control over its formulation or use.  When a freighter collides at sea with another vessel, its oil spill threatens large-scale destruction of New England’s coastline and sea life. The President calls in his advisors, including another Petersen, Peter’s father, Samuel. The elder Petersen has serious reservations based on his past experience with technology that hurt as much as helped; he was involved in the use of atomic bombs in WWII.

Peter is prevailed upon to oversee E07’s application, but there is no time for research on what a safe amount to use would be. As soon as planes spray E07 on the water, things start to go wrong… really wrong.

All you need to do is think about how much in this world is made with petrochemical products to get the idea. Picture your polyester clothing melting off you; your house, car, or fiberglass boat largely disintegrating; the power grid disappearing. E07 becomes a world traveler, and the only things safe are natural substances.

The book’s title, Destiny, comes from the name of the wooden schooner owned by the Petersen clan, as is Pine Island. There is a variety of sci-fi in which a small band of survivors escape the throes of final destruction and become the seeds of the next civilization; hopefully a more enlightened one.

Destiny has that flavor to it. In a way, it’s a shout out to survivalists everywhere—they may be on to very real worries and this story validates their preparedness. In the end, government may fail, science may betray us, and we will have only ourselves to rely on.

Maybe this is vacation literature, after all. If you spend time on Maine’s coast this summer, you may want to ditch your manmade conveniences, eat local, and simplify life.  Just try to relax. Which may not be easy while you’re reading this book.

Carl Howe Hansen will present a reading from Destiny and book signing on Aug. 14, 3-5 p.m. at Archipelago Fine Arts Gallery, 386 Main Street, Rockland. The novel can be purchased at Archipelago gift store at the same location.

Hansen describes himself as “always a writer,” but he also is a musician, technician, cabinetmaker and sailor. When he isn’t sailing off the coast of Maine, Hansen calls Sandwich, N.H home.

Proceeds from the sale of the book are being donated to the Island Institute, publisher of The Working Waterfront. 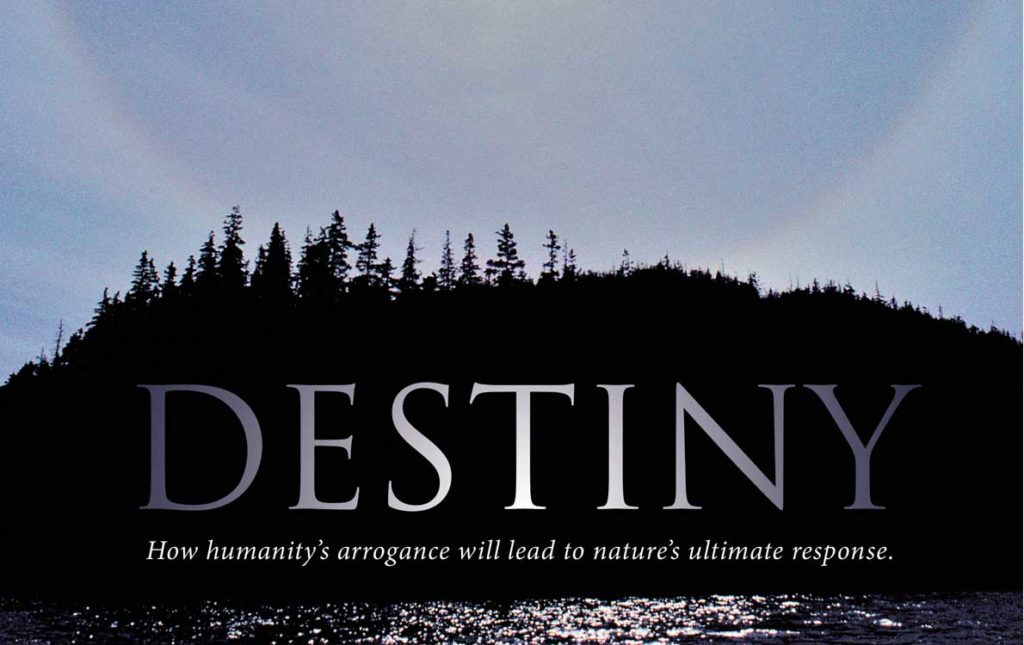