“The ocean: She is our mother, our nurturer.”

So Nancy Oakley, an artist of Mi’kmaq and Wampanoag descent, begins the statement for her piece Hidden Truthin the exhibition “wolankeyutomon: Take Care of Everything” at the Abbe Museum in Bar Harbor (through November).

“Will we allow our arrogance to take her life?” Oakley asks. Her clay bowl underscores her words: Around the outside are images of whales and sea turtles while within, affixed to its sides, are bits of garbage, including a cigarette butt and a plastic bottle.

Take As Above So Below by Maliseet artist Nicholas Paul: Three small acrylic and mixed-media canvases depict how whales are killed by humans. The middle one, Trashed, which shows a dead whale spewing garbage, is especially relevant. The New York Timesrecently reported on a sperm whale washed ashore in Italy whose body contained “48 pounds of plastic, including disposable dishes, a corrugated tube, shopping bags, and a detergent package with its bar code still visible.”

In her mixed-media piece Ma Vie en Suspens/My Suspended Life, Ginette Kakakos Aubin, from the North American Mi’kmaq-Maliseet First Nations, the Wolastoqiyik of Caouna in the province of Quebec, takes a symbolic approach to her message of protection and conservation. A painting of the bloodied hide of an endangered seal represents “the injury to marine wildlife” while the superimposed red star of the Wabanaki confederation shields the creature, with a thread of caribou sinew barely holding everything together.

Alan (Duck) Saulis of the Tobique First Nation based his acrylic mixed media piece Then & Now on an early 17th-century copperplate engraving by the Swiss-born artist Matthäus Merian (1593-1650) that depicts Native Americans hunting caribou on Mount Desert Island (then called Mount Mansell Island) by setting fires to drive the animals into the sea where they are killed by bow and arrow. In Saulis’s rendering, the antlered creatures are ghost-like apparitions and the water is polluted. 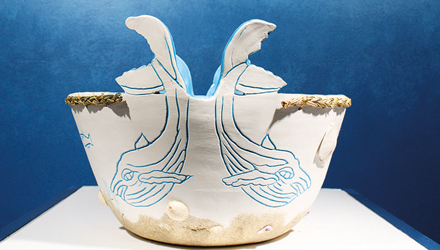 The museum turned to Allied Whale, the marine mammal research center at College of the Atlantic, to add a natural history component to the exhibition. Glassed-in shelves along one side of the gallery contain whale ribs, dolphin skulls, and other marine artifacts, along with worms and shells in bottles. To give a sense of the size of various sea creatures, they measured off their lengths on the floor. The right whale stretches beyond the gallery doors.

Rounding out the show is a collection of water-related objects from the Abbe’s collection crafted from sweetgrass, birchbark, and other natural materials. Among the highlights are an Atlantic salmon (2016) by Virick Charles Francis, Mi’kmaq; a birchbark box (before 1914) by Tomah Joseph, Passamaquoddy, featuring an etching of a figure carrying a canoe; and a birchbark canoe model (1999) by Butch Phillips, Penobscot.

The exhibition is interactive; visitors are invited to share their responses to the show using an iPad attached to the wall. The museum also highlights the sustainable practices it employed in producing the displays, including reusing foam core, cases, and pedestals from previous shows. The digital “talk back wall” is part of that effort, utilized to reduce paper waste.

The Abbe Museum collaborated with the Maritime Indigenous Artists, Inc., an organization dedicated tosupporting “the creation, dissemination, knowledge, and appreciation of authentic indigenous art of east coast tribes of North America.” Together with Allied Whale, they manage to raise our awareness of the sacredness of water and the fragility of the creatures that inhabit it. 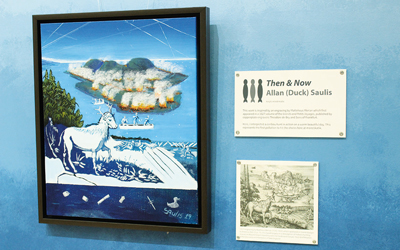 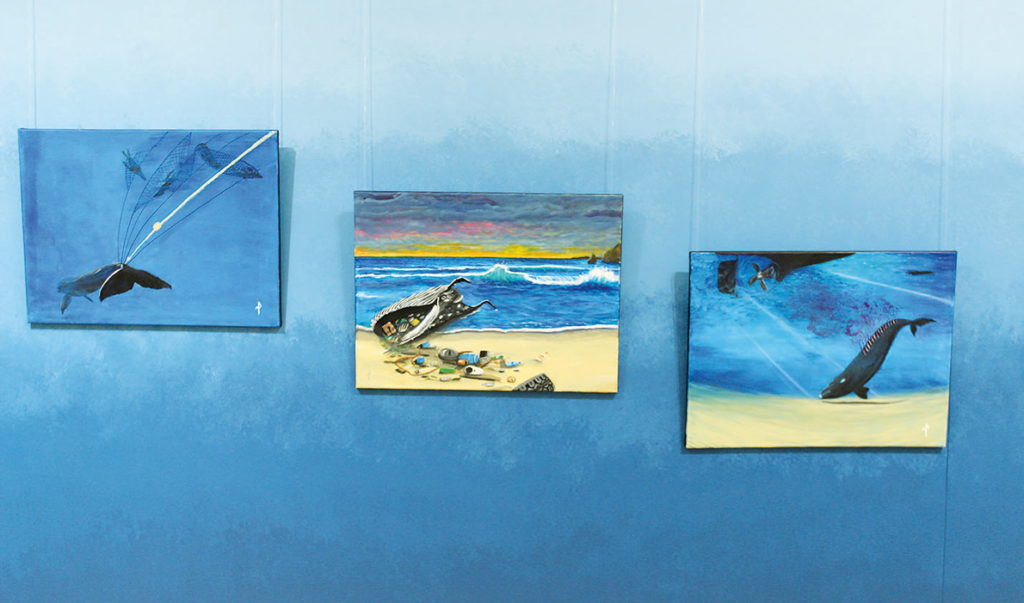