“Come to a fork, you gotta take/it, they say”

When I was growing up on Long Island, New York, my parents hired a local man, Fred Grimshaw, to look after our property. He knew how to do everything—trim hedges, fix engines, catch snapping turtles. He also had local knowledge: I remember one day going with him and my father to “liberate” some abandoned railroad ties near the track in Water Mill.

I was reminded of Grimshaw while reading Megan Grumbling’s Booker’s Point, a remarkable homage in verse to one Bernard A. Booker, 1922-2008, “unofficial mayor of Ell Pond, Maine, and finder of gold in quartz.” In 49 poems of varying lengths, Grumbling highlights Booker’s familiarity with a particular part of Maine, the countryside around a 32-acre pond stocked with trout that lies on the town line between Sanford and Wells.

Booker is a character out of interior backwoods Maine, full of pluck and vinegar, “born in the same Maine town as Moxie, full/of it.” He cackles and chortles. He knows how to get around local laws, unclog a culvert, cable a ravaged hawthorn, run phone line, grow pumpkins, and resurrect rope retrieved from the Portsmouth dump. He can also make out Eleanor Roosevelt’s visage in a hearthstone.

Over the course of the book, the speaker of the poems interacts with Booker, listening to his stories or joining him on excursions to dig holes, admire hemlocks, pick blueberries (“Pails hush with fill”) or search for white stones “back of Shirley’s place.” He offers advice and recounts youthful escapades. The poet emulates his tone, attitude, and mannerisms.

Grumbling’s prosody is remarkable throughout. She employs rhymes, whole and half, like a master and can make free verse sound formal, ending a poem with a lovely couplet: “The maple’s branches crest, as arcs will meet/when this blank rock turns graven, turns complete” (“Rock Maples”).  She likes to mix up the order of words, sometimes to a Gerard Manley Hopkins turn. A trout Booker has caught is “another silver catch of length to keep” (“Trout Tenets”).

The language is engaging as Grumbling plays on the meaning of verbs and nouns, re-activating them. At times the idiom has an Old English quality: wended, delved and gleaned. Grumbling also creates sound: In the poem “Stuff,” she ends the first and last lines of the three eight-line stanzas with an “ell” sound: bell, hell, well, etc. It’s ingenious and clever like the man she admires.

A major motif is measures, the many ways by which we appraise the world and ourselves, take stock, appraise a white pine for board feet. The theme is introduced early in the book, in the poem “Measures,” in which Grumbling describes how Booker records the size of the fish he has caught on a wooden plank:

By figures does a man recall what world

and he have wrought as intimates, a scale

by which appraisal lingers, lovingly,

upon the slightest vitals of their league.

The spirit of Robert Frost haunts these poems. It’s not simply the wonderful paraphrasing in “Stone Harvest”: “Something there is that loves a stone beyond/the hold of walls.” There’s also that appreciation of local wisdom, which sometimes sounds like Yogi Berra: “Come to a fork, you gotta take/it, they say,” Booker philosophizes.

Based in Portland, Grumbling teaches at Southern Maine Community College and the University of New England. She has a number of honors to her name, including a Ruth Lilly Fellowship from the Poetry Foundation. Booker’s Point represents a brilliant debut, causing that “gestalt of the beheld” that causes Booker to lower his voice before a perfect rock maple tree. 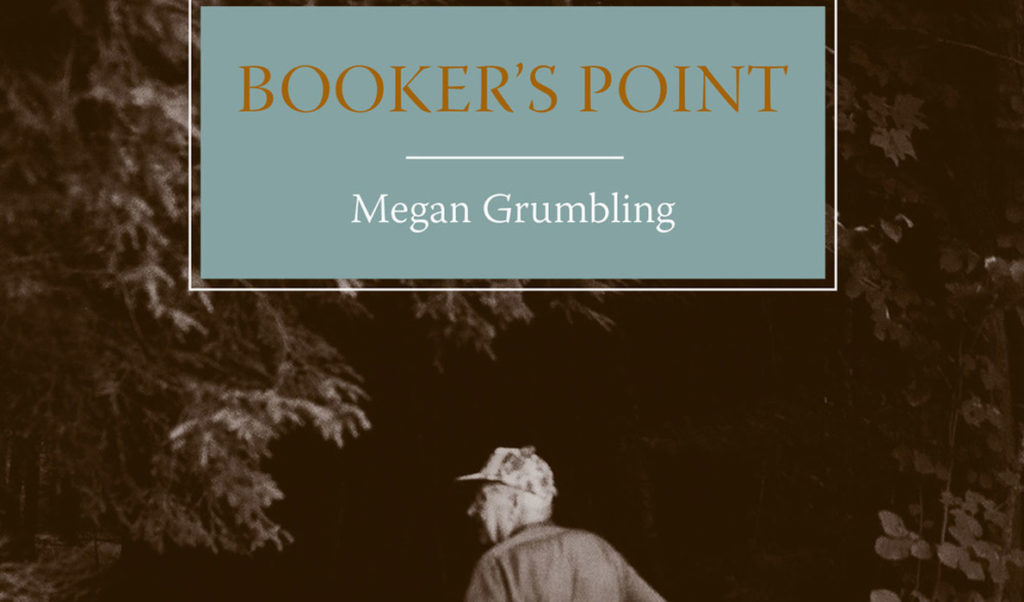