My friend Mikki owns a house on Matinicus Island. She and her late husband, a merchant marine seaman and lobster fisherman, spent most of their lives on the island where they raised their son and daughter.

Matinicus is a working island and for years has had the image that lobstermen were akin to cowboys and the island, the untamed West. The island is more like a beautiful jewel in a time capsule, surrounded by the sanctity of the sea. Going to Mikki’s house, where you can watch the sunrise and sunset at the kitchen table, always feels like going home.

Mikki had been on the island for a couple of weeks and I was missing her, so I gave her a call. She sounded great.

“Listen, you’ll never guess what I did last night! The Sunbeam (the Maine Seacoast Mission’s boat) is here and there was a pot luck supper at the church. Guess who was there. You’ll never guess. Martin Clunes! It was really special, you should come out!”

Clunes is an actor who plays the lead role in the British TV show Doc Martin,broadcast here to a loyal following on public television.

Now that I am half way through my seventh decade I sometimes wonder if all the spontaneity has been drained from my body and if dwindling time and resources mean my days of adventurous abandonment have been reduced to faded memories. Not so. My mind went into overdrive.

Penobscot Island Air had a seat available in the 1 p.m. mail plane. The planned chores for the day could wait. As my old friend Sally Shellens used to say, “The cemetery is full of good housekeepers, let’s go for a sail.”

On the 20-minute flight I had a moment of “flyer’s remorse.” Seriously, what are the chances of just meeting someone unannounced on an island the size of Matinicus? My self replied, “Be still! That doesn’t matter. What matters is that it is a beautiful day and you love the island.”

By then, the tiny gravel airstrip had presented itself. Anne from Mermaid Taxi was there in her dusty old station wagon. Hugs and kisses, stuff stashed, facilities used, dog leashed, we were ready for our mile or so walk to the landing.

The Sunbeamlay on the flats slantwise, tied to the dock, waiting for the tide. As we rounded the bend near the pier, a profound awkwardness swept over me.

Mikki said, “What should we do?”

“I have no idea.” Suddenly I had the compulsion to take pictures. Pot buoys, piles of rope, lobster traps waiting to be put to work, a grounded-out skiff, anything to distract me from the embarrassment I was feeling.

I had emotionally cut Mikki adrift. With a hint of helplessness, she called to me. “Should we just go on board?”

Before I could answer, a rusted island pick-up came wildly around the corner. It was filled front and back with a motley looking crew. A friendly young man jumped out of the cab, extending his hand with a smile. In the back were two or three men and a pile of film equipment.

We exchanged pleasantries, explaining what we were doing, all on the loading dock at the same time. He told us about the documentary they were making, and I said, “Actually, I have just flown over to meet Martin.”

At this magical moment—seriously, what were the chances?—Martin jumped down from the back of the truck, his hand extended with a genuine smile.

We talked about the film they were making. He told me there would me another season of Doc Martinand I told him that the story of Doc and Louisa was the story of my first marriage.

Then, with total grace, Martin said “John, Shirley has a camera around her neck, why don’t you take some pictures?” He had just saved my dignity from having to ask. Selfishly, I put my arm around him (he is two years older than my son). We beckoned for Mikki to get into the picture and all joked about the potential pinups in the bedrooms of two old ladies.

We floated back to Mikki’s house, buoyed by the pure synchronicity of this caper we had pulled off. We opened a bottle of Riesling and headed for the kitchen porch where we could watch the Sunbeamwhen the tide was right, and she could head to Isle au Haut. Imagine my delight as I peered through my binoculars, seeing Martin peering through his and waving back at us. Talk about locked in your hippocampus!

Next morning there was the added drama of an unusual storm passing to our north and east. When you go to Matinicus, you never know exactly when or how you will return. If the planes can’t fly and the ferry doesn’t have a favorable tide, you could wait days or even weeks. If you are lucky you can hook up with one of the fishermen who might be going in for supplies or repairs. But on this day Neptune was aligned with Pisces and I was able to return magically from this outstanding adventure with only a two-hour delay. 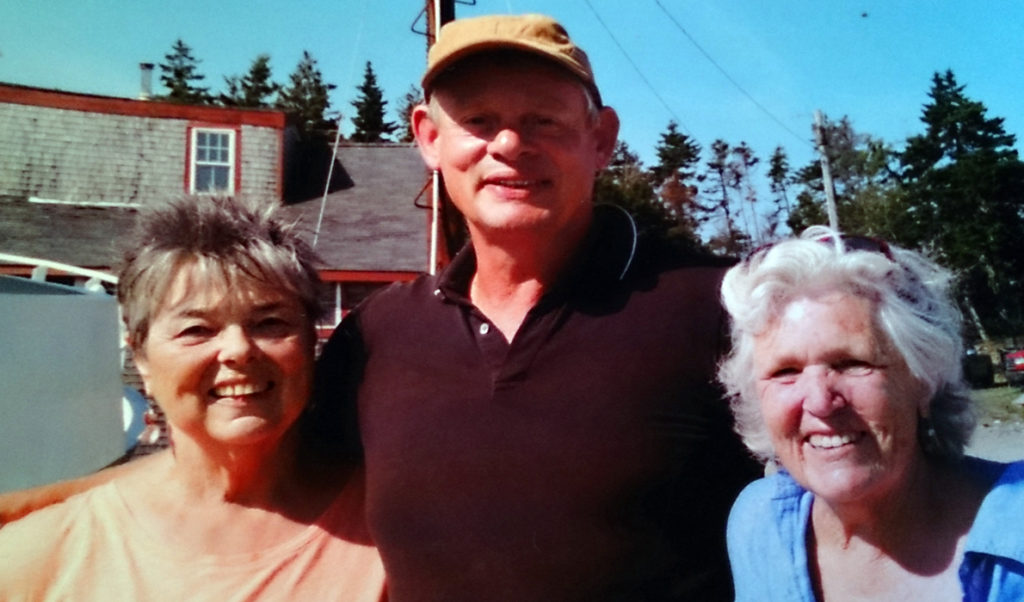