When you are young and you’ve done something that has you pumped, it’s often your parents’ reaction that sobers you up. This is true, scientist Joel Clement found out, even when you’re middle-aged.

Clement, the former director of the U.S. Interior Department’s Office of Policy Analysis, took on the Trump administration last year in a very public way when he announced in a Washington Post op-ed that he had filed a whistleblower lawsuit against his then-employer.

He shared his story in person during presentations he made in Lewiston and Falmouth in March.

He got a lot of “interesting” reactions to his op-ed from people all over the country, he told a sold-out audience at Maine Audubon in his hometown of Falmouth. But it was his dad’s reaction, he said, that really made him realize the import of what he had done. Mimicking an exaggerated Maine drawl, he said his father told him, “Well, you caused quite a stir.”

“Over and above it (all),” he said, “that was the thing that really shook me.”

In his role at the Interior Department, Clement, among other things, worked with Alaskan natives and other federal government officials on resiliency efforts to help the residents of Alaskan villages in the Arctic endangered by climate change.

In the months following President Donald Trump’s inauguration, Clement continued speaking publicly about the effects of climate change and advocating for those people and places facing impending ruin.

He and his federal colleagues knew that certain programs related to climate change and agencies—such as the Environmental Protection Agency—would be targeted for cuts by the Trump administration, he said, because it was clear about wanting to make changes in those areas.

“They didn’t want to spend money on preventing (climate change) from being worse, but it didn’t occur to me that they wouldn’t want to protect the health and safety of those already being impacted by climate change,” he said. “Obviously, I feel like a fool now because I couldn’t have been more naïve or wrong about that.”

In the spring of 2017, the president signed an executive order rescinding an Obama-era executive order that directed the government to work on climate-resilient investments. With Trump’s revocation of the Obama order, Clement’s work with Alaskan native villages ended.

By June, he was reassigned to the Department of Interior’s Office of Natural Resources Revenue, which, he said, is an accounting office that tracks and collects royalties due from companies that mine resources on public land.

Shortly after Clement received his reassignment notification, Interior Secretary Ryan Zinke testified before Congress that he planned on cutting the department’s budget, in part through a reduction of employees which would result from a combination of attrition, reassignments, and buyouts.

Clement put two and two together and set about finding himself a lawyer. In mid-July, he filed a whistleblower lawsuit, alleging that his reassignment was retaliation for speaking out about the impacts of climate change.

Then he told the country about it in his Washington Post op-ed. A firestorm of attention ensued that left him bewildered, but no less determined. “I didn’t want abuses like this to go without some kind of response,” he said. “So, I had to say something.”

In the months that followed—he resigned last fall from his position at the Interior Department—he has continued to speak nationally and internationally about his experiences with the Trump administration and on climate change.

“It’s appalling to me that our political leaders—putting profit before safety – are intentionally putting us at risk,” he said. “The Alaskan native villages in the Arctic are a vivid example of the risk that (the administration) is putting people at, but also here in Maine, of course, we’re in the crosshairs and it’s coming. We’re in line for these impacts and they’re going to be disturbing.”

Shishmaref, a village along Alaska’s northwest coast, has been home to native Alaskans for some 400 years. Modern day residents there are facing the unthinkable: obliteration by the Arctic Ocean.

Rising temperatures in the Arctic are causing thawing permafrost and a reduction in sea ice, Clement explained, making Shishmaref’s 2.8 square miles of land (and the homes and people on it) vulnerable to being peeled off little by little by more frequent strong storms or wiped out in one ferocious swipe.

Shishmaref is 3,600 miles away from Maine, but what is happening there and to other native Alaskan villages in the Arctic foreshadows what’s to come for coastal communities in Maine and nationally, he said.

As he pointed out, Maine is already experiencing some of the effects of climate change: a warming Gulf of Maine endangers the state’s fishing industry; warmer winters make for a more hospitable environment for pests, such as ticks, that put at risk the health of people, wildlife, and the broader ecosystem; and rising oceans and fiercer and more frequent storms erode the coast, impacting the tourism industry and costing cities, towns, businesses, and property owners.

“Don’t think for a minute that how we handle the village of Shishmaref in Alaska doesn’t have implications for how we handle Miami Beach or Boston Harbor or the waterfront in Portland,” Clement warned. “How we process this from a governance, a financial, and a social-cultural angle is going to matter in the lower 48.”

Clement urged his audience to pay attention to what’s happening in the Arctic and elsewhere and to policy making on the local and federal levels, and to fight to make science the North Star of public policy.

“I don’t see how we can make policy without taking into account the impacts on our health and safety or what is working and what’s not working,” he said. “That’s what science does for us.” 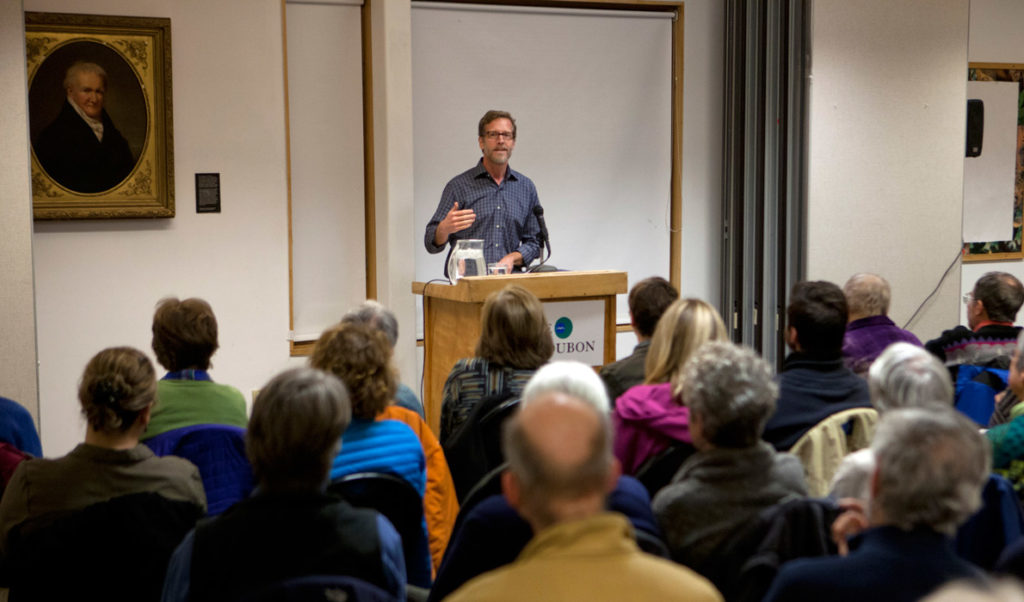