Sea level along the Maine coast has been rising at a fairly regular rate for the last 5,000 years or so. In the 20th century, sea level rose at about 1 inch per decade. Looking forward, we are expecting much faster sea level rise than we experienced in the 20th century.

These are their “likely” scenarios, which have a two in three chance of occurring, but they also project a one in 100 chance that we could experience more than 6.5 feet of sea level rise on the coast of Maine in the next 80 years.

So what are Maine communities doing to prepare for these changes? Dan O’Connor, an engineer with Collins Engineering who has been supporting Maine towns with local infrastructure projects for years, notes that many of the communities he is working with are now incorporating sea level rise into their decisions and plans for local investments. This wasn’t the case just five years ago. He notes that the most important first step for communities to take is to understand their specific vulnerabilities, meaning which infrastructure is most likely to be impacted.

Maine communities large and small are starting to study their vulnerabilities. Southern Maine beach communities—Kennebunk, Old Orchard Beach, Saco, Wells, York, Ogunquit—have each started looking carefully at infrastructure, and the Southern Maine Regional Planning commission is looking at vulnerable low-lying roads in a comprehensive study. River-side communities, including Damariscotta and Machias, are actively considering infrastructure upgrades to deal with flooding of downtown areas. The island communities of Islesboro, Vinalhaven, and Chebeague are looking at options for wharves, parking lots, and low-lying roads, as are larger communities with critical working waterfront infrastructure, including Portland and Bath.

O’Connor notes that many of these towns have taken a very proactive approach and have capitalized on grant opportunities to help fund studies. There are a range of grant programs (see Maine Coastal Program website for details) to support community projects, but a community needs to be nimble to capture state and federal dollars to pay for vulnerability assessments, which can be difficult for small communities with limited staff capacity.

Carol White, a geologist and member of the planning board on Chebeague, points out that for many communities, the one to three feet of sea level rise on over 50 years is hard to visualize in terms of the impact on shoreline.

“People think, ‘One foot, that’s not so bad,’ but one foot of vertical increase in sea level could mean the sea stretches half a mile farther inland in some of our estuaries and inlets. We should be talking about the horizontal shoreline changes that come from the sea level rise. These will be larger and are hard to picture.”

As they begin to incorporate sea level rise projections into planning, communities are looking at range of impacts. Flooding is one of the most obvious. Pete Slovinsky, with Maine Geological Survey, emphasizes that higher sea levels will mean we’re likely to experience what we think of as a once in a 100-year flood once every ten years. This change in the frequency of extreme flooding is due to sea level rise alone, without assuming any increase in frequency or intensity of the storms themselves.

Flooding also can impact fresh water supplies and water treatment facilities, as well as low-lying sections of road, and can cut people off from evacuation routes and emergency services access.

Both flooding and storm damage can impact wharves and parking lots that provide critical access for fisheries as well as ferries for island communities. This type of working waterfront infrastructure is located on the seaside not for the view, but by necessity. Whether it be a ferry terminal or a lobster coop, relocation inland is not an option.

The Island Institute has heard questions from many island and coastal communities about how to deal with threats to their critical waterfront infrastructure. In the next couple of months, the Island Institute will be putting out a request for proposals from communities looking for technical assistance to identify their vulnerabilities.

The assistance is designed for communities unable to tackle a complex new issue or just beginning to identify vulnerable waterfront infrastructure. The plan is to put technical assistance boots on the ground to help small coastal communities identify what is going to get wet and for how long and what they can do about it. 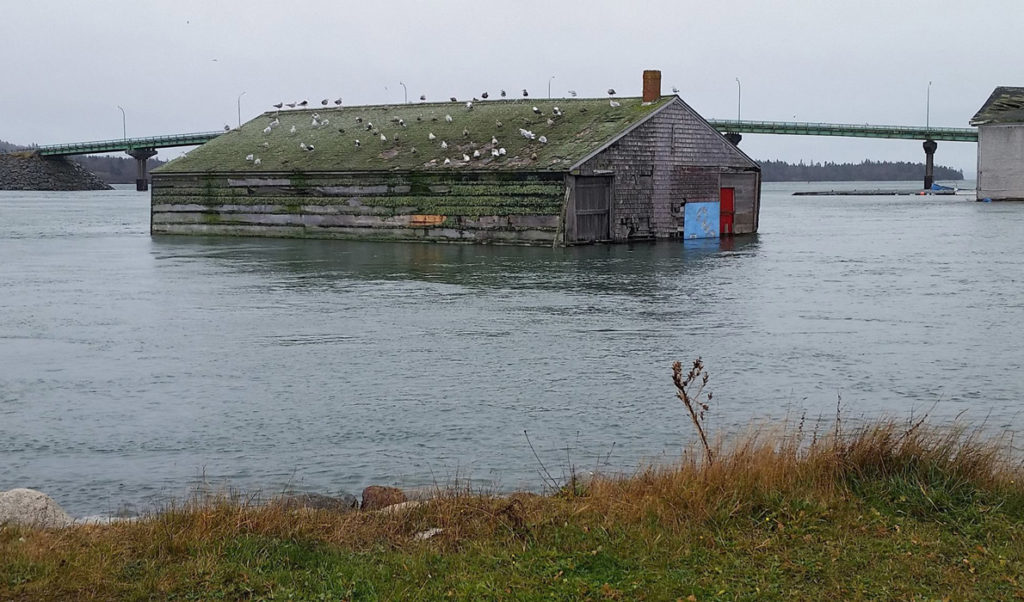