A few years ago I went to Florida on vacation. I’d never seen a woman in a thong before. Of course I’d seen pictures of them, but seeing them actually move around close enough to, well, study, is different. I’m glad I waited.

At this stage, happily married and with an adolescent daughter, it was my natural interest in structural engineering and design that was aroused.

The blonde who would before long occupy my first thong bikini showed up around mid-morning in shorts and a tank top and arranged a chaise lounge poolside right next to me. She was beautifully browned and gorgeous. There were other places she could have stationed herself and so it didn’t seem much of a leap to assume that lying there in my blue polyester swim trunks, she found me tempting. The novelty of that much male Maine epidermis, nearly dead for lack of vitamin D, of a complexion that would have made the Aryan Nation proud, in a sea of perfect brown bodies, excited her a little.

She had a little bag and withdrew from it a couple of towels, sunglasses and a paperback copy of Clear and Present Danger (no, I’m afraid it was lost on me).

I rolled over onto my back. I didn’t want my varicose veins to frighten her away. An attendant came around immediately and asked her if she’d like anything. I’d already been there 15 minutes and he hadn’t even spoken to me.

Suddenly a young brunette came flying around the corner on roller blades and, groping for some purchase on my chaise, lurched to a stop next to “us.” (Our relationship had matured in my mind).

“Where’s your suit, Hope?” she asked.

Hope held up a tiny bag and withdrew a little string and some tiny swatches of cloth. It looked like the semaphore flags from Malibu Barbie.

“Right here, Vicki. I’ll go put it on,” said Hope. I marveled at the foresight of someone 20 years ago having named her Hope.

In a few minutes she returned wearing something that had been previously residing, albeit not as happily, in a little cloth bag. Her companion emerged from the changing room with a similar outfit and arranged herself on a chaise nearby.

The motel routinely posts “Sunburn Warning” next to the pool. It changed every few hours. Presently it read: “Danger of Sunburn 10 minutes, Danger of severe Sunburn 15 minutes.”

I realized that they’d arranged their chaise lounges to best avail themselves, not of my proximity, but of the sun. I rolled over and sat up, allowing my towel to drape itself over my shoulders so its ends hung down and covered my chest which rode nowadays so much lower than it used to, side by side, as it were, with its companion ego.

She got out some lotion. I gazed at that place in the middle of her back she couldn’t reach and thought how useful I could be. Then I began to recognize the tingle I felt for what it was, sunburn, and not the anticipation it was once.  My last words to Elaine before she’d left for her walk down the beach rang in my ears: “Suntan lotion is for sissies.”

I stood up, mustered my vanity, and headed back into the shade.

Back in Maine, we had some friends over for dinner. We spread pictures of our trip all over the table. Karol zeroed in on a clandestine shot Elaine had taken of me preening next to the ladies and observed, “Well look. Victoria’s Secret meets Modern Maturity.”

Phil Crossman lives on Vinalhaven with his long-suffering wife Elaine and owns and operates The Tidewater motel. 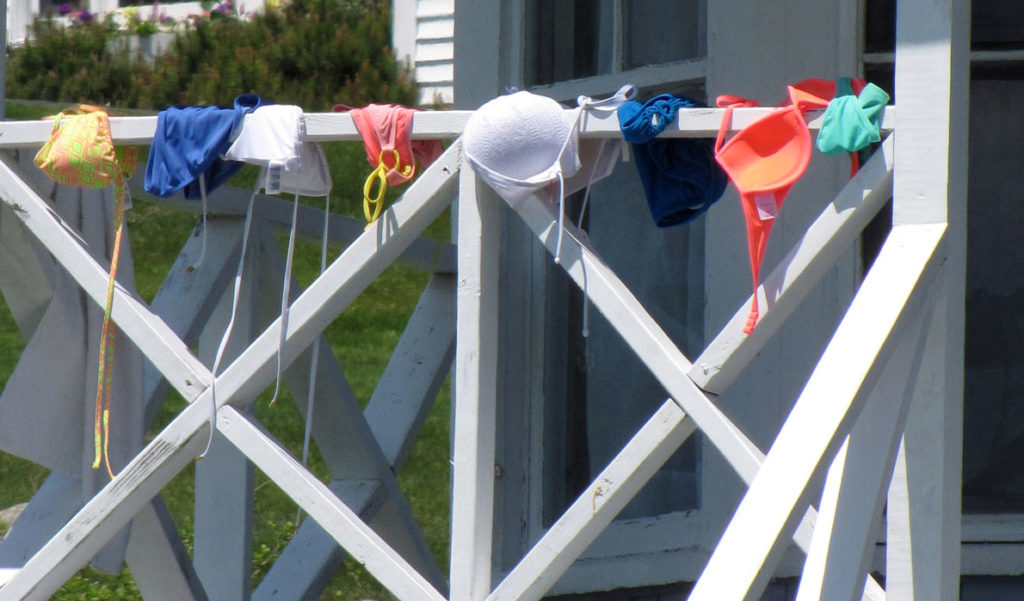 Bathing suits of the modest variety dry in the sun on Peaks Island.