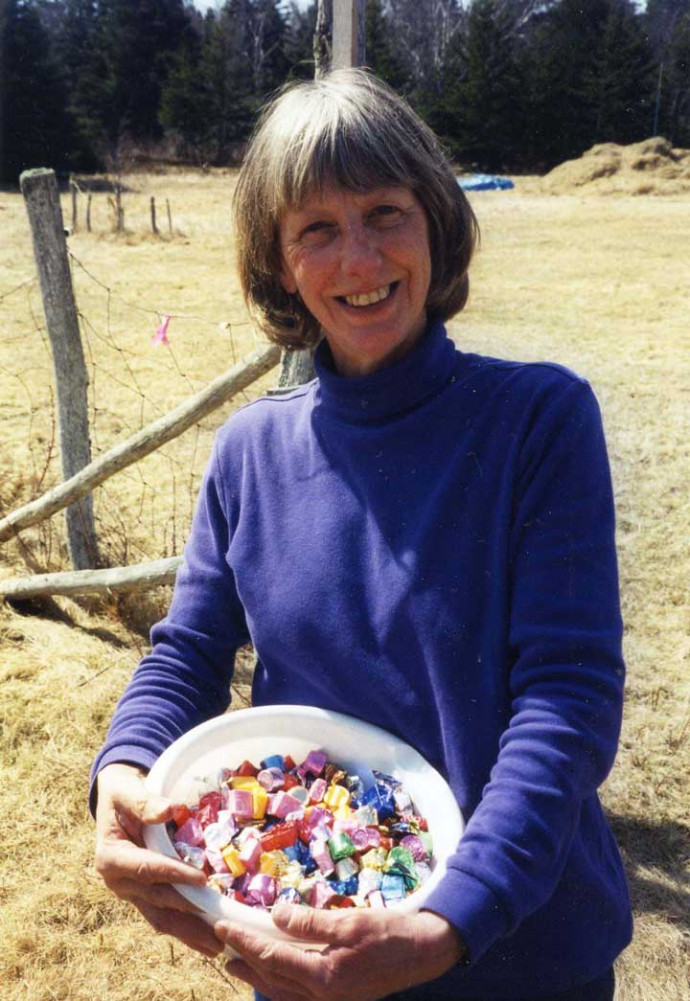 The sun is shining through a milky sky. A warmth beats its way through the crisp early spring air. Stalks of new green grass struggle to poke through the thick, dead, brown mat of old grass left from the winter, and gray trees have yet to offer their new buds. Charlotte Goodhue stands at the entrance to her pasture surrounded by a gaggle of local children ranging in age from 12 down to the earliest walker, all abuzz with anticipation. Goodhue raises the soup pot she holds in her hand, bangs it with a sturdy wooden spoon, and the children take off at a dead run.

Goodhue owns a large old farm on Vinalhaven’s Roberts Harbor and has been holding Easter egg hunts on the property for 35 years. According to Goodhue, she started the tradition as early as 1980 as a family affair. The event quickly grew to include friends, neighbors, acquaintances, until she eventually opened it to the public.

“She would call more and more people,” said Jessica Farrelly, Goodhue’s daughter. “She kept a phone list. Then she would go to the school and ask for a list of kids to call.” By the early 1990s, Farrelly says, the egg hunt had grown big enough to advertise in The Wind, Vinalhaven’s weekly newspaper.

Now, each year Goodhue invites all local children, preschool through grade six, to her farm for an Easter egg hunt which she prepares, pays for and presents with the help of a small group of family and friends. Goodhue described the three phases of preparation for the annual egg hunt. Phase one comes prior to Easter when Goodhue invites friends to her house to help stuff hundreds of plastic Easter eggs with Goldfish crackers, animal crackers and some candy (but not too much!) for the preschoolers. Some years, small plastic animal toys have been included in the eggs as well.

Phases two and three happen on the day of the hunt. Family and friends gather at Goodhue’s home, bringing potluck dishes for an Easter brunch. Groups of two or three spread out in the areas in which the hunt takes place to hide the goods: plastic eggs in the pasture for preschoolers and kindergartners, and foil-wrapped candy in different sections of the orchard for grades 1-3 and 4-6. Once the candy is hidden, everybody returns to the house to enjoy a nice brunch and wait for the crowd to arrive. Farrelly says the brunch is one of the special parts of the tradition.

“The meal is great,” she says. “There are always a lot of stories. There is usually someone who has had a recent big event,” such as a death in the family or an illness. Farrelly’s eldest son Trevor and some of his friends began helping with the egg hunt set up a few years ago.

“That was the first time there were three generations at the brunch,” says Farrelly.

Everybody involved has his or her own favorite part of Charlotte’s Egg Hunt. For the kids, it’s usually the candy, or the simple thrill of the hunt. For the adults, it’s often about the social aspect of the event.

“I love that time when you’re waiting for everyone to get there and all the kids are running around and playing and they’re so happy to see each other,” says Farrelly. “It’s like recess without school. It’s so rare and so lovely and they should have more chances for that.”

Goodhue is fond of the setting.

“One thing that’s fun for me is that it’s centered on the orchard,” says Goodhue. “It was planted 100 years ago. On that day, for that occasion, nothing changes. The only thing that changes is that every now and then a 100-year-old apple tree will rot and have to come down,” she says.

“Mom loves the kids to frolic through the trails,” said Farrelly. “She likes kids to have to weave in and out of the trails and have an adventure.”

For Goodhue and her family, the annual Easter egg hunt is also a way to welcome spring.

“It’s a leisurely visit [with friends and visitors] once the orchard is done and the kids are playing games,” says Goodhue. “It’s a wonderful way to enjoy the beginning of spring together.”

Goodhue has always been generous with the use of her land. Many islanders have been married in “Charlotte’s Field.” Goodhue’s property has been used for annual musical events and even Little League practices before there was a proper baseball field at the school.

“As an owner, I feel like a caretaker,” said Goodhue. “In my mind, it’s still Herrmann’s place,” she said, referring to Franz Herrmann who owned the farm back in 1915. “As long as I can stand up… Heck, I can be in a wheelchair and they can keep doing public events. I’m happy to keep doing them as long as I can. If I’m succeeded by someone who’s willing, I hope they’ll continue to do the same.” 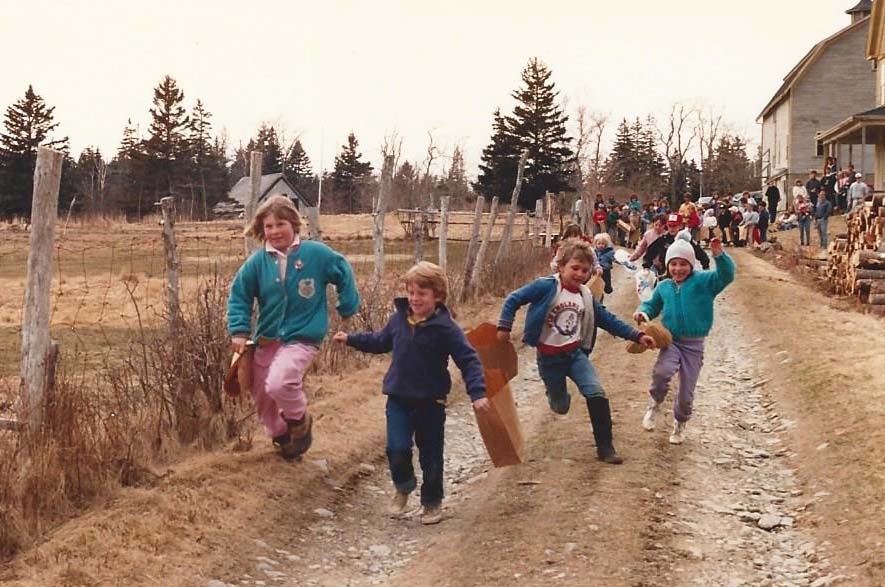 Children take off in their hunt for the Easter eggs in this snapshot from decades ago.