On March 16, 1820, cannons boomed and a glamorous ball (attended by the state’s then-acting governor, William King) was held at Portland’s Union Hall to celebrate Maine finally—after more than 30 years of trying—becoming a state.

The many celebrations that were planned this year to celebrate the bicentennial have largely been postponed or cancelled due to the pandemic, but you can still celebrate on your own by taking a ride in your vehicle and seeing some historic places that represent various moments in Maine’s journey toward statehood.

To help you make your own road trip, we’re offering a two-part trail map of sorts in this issue and in the next that link ten physical locations, mostly along the coast, to moments along Maine’s long journey to statehood. Most of these locations are open to the public; a few are not, but can be seen from a respectful distance from the road.

This first part of the series covers the 1700s and the second part will cover 1800 to statehood in 1820. We begin with these five locations:

During the decades leading into the early 18th century, diplomats from Norridgewock (and other Wabanaki communities) worked hard to build good relations with English settlers, while also protecting their territory from English encroachments.

“They were very much active agents in this story and their work included some brilliant diplomacy as well as strategic military prowess when necessary,” said Ashley Smith, who grew up in Madison and is a Native American studies scholar teaching at Hampshire College in Massachusetts.

But clashes did happen, and they could be violent, as was the case in 1724 when tensions spurred by missionary priest Sebastian Rasle exploded and a raid by British troops on the Native Wabanaki village resulted in a brutal massacre of the Wabanaki people there.

Various histories present conflicting stories of this episode in Maine history, said Smith. Most of those histories represent that the attack on the village wiped out the Wabanakis living there and drove those that survived away, but that is not entirely true, she said.

In the mid-19th century, stories of Native peoples being vanquished by settlers were commonplace in state histories being created across New England, she said, including in Maine. These stories are part of a long history of sidelining Native peoples here that has continued to cause challenges to the present day.

“The story that locals know—that ‘all the Indians were gone after 1724’—is not only untrue, it can actually be really damaging to the descendants of those survivors who still have connections to that place,” she said.

Some did, in fact, return to the village, at least until 1765, but even those who left the village never left their homeland, she said. Today, descendants of survivors of the 1724 attack still live in Maine and in the greater Wabanaki territories.

Visit: The Historic Pines Trail and picnic area is on the Father Rasle (Rale) Road off Route 201A. The trail is a mile long following a ridge along the Kennebec River. You’ll see historical site markers and the Father Rasle monument is accessible from the trail.

Earlier versions of present-day First Parish Church in Portland were witness to two big moments in statehood history: the first separation convention, held in 1785, and the convention creating Maine’s constitution.

No specific event seems to have touched off the first separation movement, but those who wanted separation, including Henry Wadsworth Longfellow’s grandfathers, Peleg Wadsworth and Stephen Longfellow, set forth a list of grievances, including that Maine was unfairly taxed and underrepresented, to support their argument.

That first separation convention didn’t result in any great enthusiasm for the cause. In fact, many of those attending later were accused of fostering unconstitutional and insurrectionary activity.

It’s quite fitting that when success finally did come, First Parish, the location of that first separation convention, should, in October 1819, play host to the convention that hammered out the state’s constitution.

Visit: 425 Congress St. First Parish is an active worship community. Go to https://firstparishportland.org for more information about opportunities for visiting.

While Mainers in general were tepid about separating from Massachusetts in the early years of the separation movement, those living on the coast and involved in the coasting trade were, for the most part, staunchly against it. Georgetown, for example, consistently voted against separation until the final two votes in 1816 and 1819.

The biggest reason for their opposition was the Coasting Law, enacted in 1789, just a few years into the early separation movement. The Coasting Law directed trade vessels to stop at a custom house and pay a fee in each state not adjacent to its originating location.

As part of Massachusetts, Maine’s vessels could travel from Eastport to New Jersey without stopping and forking over any money, said Lincoln Paine, the Portland-based author of Down East: An Illustrated History of Maritime Maine.

“The people in the coastal towns were against it because it would have been a prohibitively onerous burden for them,” he said.

The Coasting Law was favorably altered in 1819, which opened the floodgates on the separation vote. While many coastal towns still voted more against separation than for it, the yesses in those coastal communities made the difference.

View: Georgetown’s Benjamin Riggs made his fortune through his involvement in the coastal trade. In the victory-setting vote of 1819, he supported separation and was chosen as a delegate to the constitutional convention held that fall. His home, built around 1790 on Robinhood Road, is a private home, but can be seen from the road.

Henry Wadsworth Longfellow’s grand-fathers were among the instigators for separation. They were members of the Federalist party—the party of George Washington and Alexander Hamilton—and the dominant political party in Massachusetts at the time. But political tides changed after 1800.

As Thomas Jefferson’s Democratic-Republican party began to gain power nationally and in Maine, Federalists in Maine who had supported separation from Massachusetts began to see separation as a bad idea and began actively lobbying against separation in an attempt to retain their political power.

Ultimately, the Democratic-Republicans left the Federalists in the dust, but the Wadsworth-Longfellow family remained involved in the governance of the new state, with Henry’s father serving as a member of the state legislature and in the U.S. Congress.

Visit: 489 Congress St. Operated and maintained by the Maine Historical Society, the Wadsworth-Longfellow House is a museum open to the public. Go to www.mainehistory.org/house_overview.shtml for visitation details.

In the earliest days of colonization of what came be to called New England, who owned what land was sometimes unclear, especially in the District of Maine. Competing claims over territory were common and became outright violent after the Revolution when men like Henry Knox, a “great proprietor” who owned vast tracts of land in Maine, butted heads with so-called “liberty men,” the largely poor settlers of interior locations who believed that the sweat of their labor on wilderness lands gave them right to those lands.

With their connections to Massachusetts state government, the great proprietors often had the upper hand in land disputes with the settlers. But the balance of power began to shift as the population of the settlers grew and they found a supporter with powerful connections of his own—the leader of the Democratic-Republican party and eventual first governor of Maine, William King.

Visit: 30 High St. The Henry Knox Museum is a 1929 re-creation of Knox’s original mansion, Montpelier, built in 1794. The original mansion was demolished in 1871. Go to https://knoxmuseum.org for visitation details. 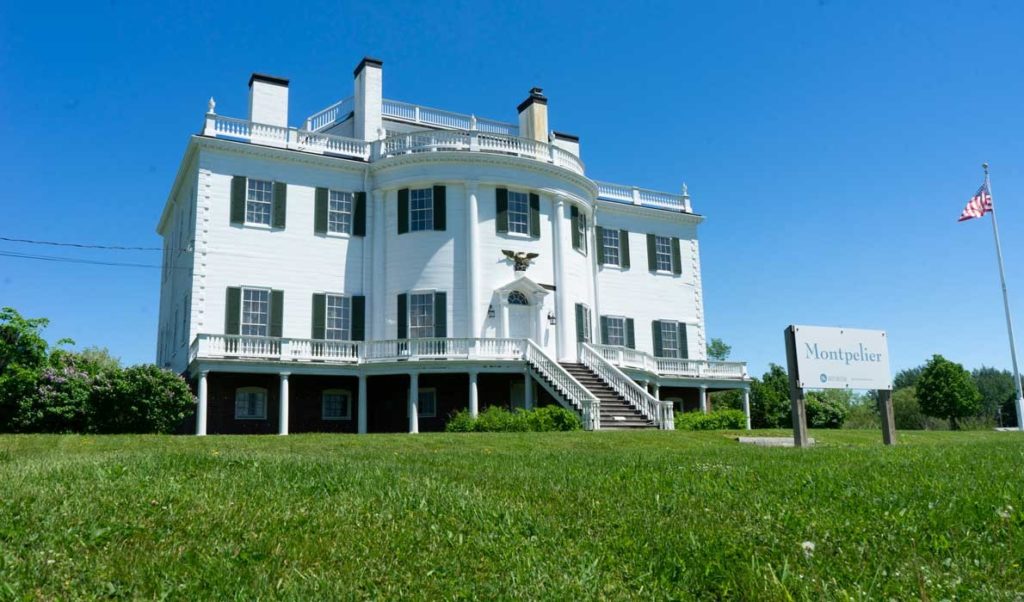 The reproduction of Gen. Henry Knox's mansion Montpelier in Thomaston.