Early in the season, we carry our kayaks over the thick layer of rotten seaweed at the high tide line. Living by the sea, this slippery, smelly refuse makes me think of gardening soon, that I must remember to return with buckets.

Since I was tiny I have come to this beach on Frenchman Bay. In those days, almost 60 years ago, the tide pools swarmed with creatures—spiny green sea urchins, minnows, crabs scrambling away, starfish flexing their arms, and large blue mussels by the thousands. My mother read books like Silent Spring and The Population Bomb, and fretted about the upward trajectory of the world population, showing me graphs that the 2 billion on earth would soon swell to 10 billion. She was right.

Somehow, the arc of life has not taken me far afield. I deliver babies as a nurse midwife. I paint this bay and these islands—Bean Island and Ingalls, the swell of Cadillac, Dorr, and Sargent mountains, the Porcupines scattered in the mouth of the bay—like my artist father did.

Perhaps it is possible for humans to imprint upon a place, like goslings.

As I paddle out in my kayak, the loons are here, and a few Arctic sea birds linger. I also notice what is not here. Not yet. Soon, we will see giant white cruise ships towering over Bar Island, often three ships at a time, ships so big they block the island. Even from five miles away, I can see the diesel exhaust rising out of the enormous smoke stacks.

One of the biggest and most polluting industries on Earth, the cruise ship industry has discovered Frenchman Bay, and it wants its stake to be massive and permanent. This year, 180 of these floating cities will come to Frenchman Bay, twice as many as visited Portland last summer.

I have read about the right whales; 17 were killed last year, with five out of seven killed by ships. I fear for the oceans—they are acidifying and warming. The Gulf Stream is slowing down. The climate is changing, and we humans are to blame.

I read about the pollution caused by cruise ships, the poor working conditions of their low wage workers. I learned that the largest ships in the world don’t want to tender-in passengers, they want to berth the giant ships for their convenience.

The state wanted a berthing pier in Frenchman Bay so badly that in 2017 it inserted a “poison pill” into the option to purchase the old ferry terminal property, telling Bar Harbor residents that if they voted to limit the size of berthing ships and put passenger caps into the hands of citizens at yearly town meeting, the town could not buy the land. So the “poison pill” worked, and zoning to enable a large cruise ship berthing pier passed.

Later in 2017, a 40-citizen ferry terminal advisory committee in Bar Harbor recommended the ferry terminal site be purchased for the highest price ($3.5 million) to avoid the state’s strings attached “claw back” provisions. The committee recommended a multi-use marina be built there eventually.

If the town does not buy the land, it will be sold to the highest bidder and then we can be assured of a cruise ship berthing pier. Our only hope is that the town purchases the land and uses it according to the wishes of residents. We need a local marina for better water access for locals and to ensure the town always controls this vital gateway to Frenchman Bay. The nature that surrounds us depends on that stewardship.

Already in our lifetimes we notice the tidal pools are nearly empty of small sea creatures, the stars are not seen clearly due to light pollution, and a haze of smog comes over Acadia. It is not alarmist to believe that a berthing pier for the largest ships in the world will only bring more and more ships; ships which run into whales, dump waste into the waters, and pump toxic fumes into air.

Bar Harbor residents have a very important decision to make on June 12, a decision which will affect our lives, and the lives of our children and grandchildren.

Bar Harbor can make the brave and smart decision to purchase the ferry terminal property. I hope it can eventually become a modest but productive multi-use public marina, to be enjoyed by locals and visitors for generations to come. 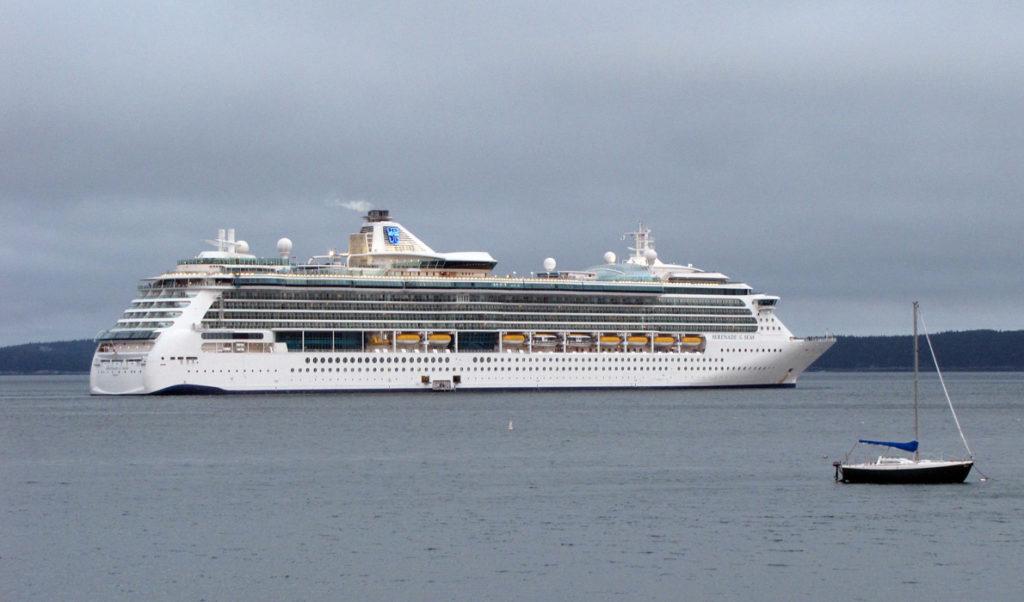 A cruise ship off Bar Harbor in October 2016.

Maine—as it should be, as it is