The Stone From Halfway Rock: A Boy’s Adventures on the Coast of Maine

The pages of The Stone From Halfway Rock should practically reek of salt air and ocean spray, so vividly does author Peter Macdonald Blachly, a writer and musician who lives in Bath, share his boating experiences. And they are from a special time and place (which family snapshots illustrate) of childhood summer vacations spent on Sheep Island near Cundy’s Harbor, by the waters of the New Meadows River and Casco Bay, when he was 10-12 years old.

There are echoes of the wonderful movie Moonrise Kingdom, a 2012 feature film by Wes Anderson. Both are set on islands off the New England coast, and are coming-of-age stories told with empathy and humor. There’s a delicious combination of danger and dissipation, risk and relief. As a viewer or reader, you aren’t assured all threats will be overcome and all problems solved, but the sense of gained confidence provides a measure of success.

Vacations in Maine in their rustic camp meant going without many conveniences, along with a shorter supply of parental supervision at times, as Peter’s father needed to work back home in Washington D.C., and Mrs. Blachly stayed on alone with their four sons and daughter. She appears to have supported the children’s curiosity and adventurous spirit.

When 10-year old Peter and a slightly older brother wanted to take their small sailboat to another island on an overnight camping trip, she agreed. The packing of provisions was left to the boys, who took matches, pancake batter, maple syrup, a stick of butter, forks, napkins and paper plates. But no cooking pan or ingredients for dinner came along. Hungry that night, the boys managed to liberate a trapped lobster and boil it in an empty coffee tin over a fire. The Blachly kids wouldn’t starve.

The Blachlys appreciated ingenuity in boat building, which led the family to local resident and master boat builder Charlie Gomes, from whom they acquired a sailboat of his design. Charlie also oversaw the building of a 10-foot long sailboat by Peter and his older brother Sandy, dubbed Piglet, with sails rigged like a sloop. Peter went on to build a hydroplane out of a plywood kit which, with a 15-hp engine, gained thrilling speeds of 20 mph or more.

One story recounts the surprise ending to the visit of an otherwise bored school chum from the city. After Peter and his friend tied up a skiff at Ragged Island to help fight a wild fire there, and then lost track of the time (and being due back home), a Coast Guard boat arrived, having been alerted by Mrs. Blachly.

Peter accepted the offer of a tow home, keenly aware his skiff “looked especially small and unseaworthy. The 3-horsepower outboard motor on the stern looked to me like a shrunken head.”

Underway, Blachly writes, “the captain poured on the power to get us home before dark, and for some time Don and I stood at the stern of the cutter marveling at our speed and the immense size of the wake the cutter left behind us. During the afternoon, the swells had grown considerably, and I was glad we didn’t have to spend another two hours bringing the skiff back home through these waves. It would have taken us well past dark. I was also grateful for… the friendly demeanor of the Coast Guard crew. But mostly I was happy to have done something with Don that I knew he would remember enthusiastically for years to come.”

And that describes well this warmly entertaining book: adventures remembered enthusiastically. Once the “big people” in your family have finished this book, pass it along to or read it out loud with children- it’s perfect for a wide range of ages, and landlubbers too. 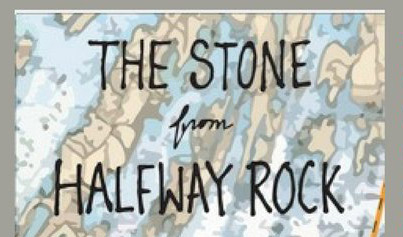