A Dangerous New World: Maine Voices on the Climate Crisis

“No one wants to see disaster coming, but those who look, do,” David Wallace-Wells says in his chilling book about climate change, The Uninhabitable Earth. Wallace-Wells, a self-described climate “alarmist,” offers a journalist’s literately assembled facts and harrowing, all-too-accurate-seeming analyses about our worldwide disaster in the making.

But what do our artists and poets make of it?

A Dangerous New World offers some responses from Maine, and elsewhere. The idea for the book was born, editor Meghan Sterling tells us, when she attended a poetry reading where “the timbre of (Kathleen Sullivan’s) voice matched the timbre in my heart,” concerning climate change. So she suggested the two collaborate on an anthology.

The product is a large-format book containing personal statements, including a foreword by Maine Gov. Janet Mills, about the experience of living on the edge of the dizzying cliff that our technological culture is poised to fall off. Where science and journalism like Wallace-Wells’s provide facts and analysis for the rational brain, art and poetry should open access to the emotional, moral, and spiritual effects of those outer realities.

The entries in A Dangerous New World are, if not always evocations of feeling, at least statements about the feelings that go with seeing a climate disaster coming. Grief, indignation, anger, nostalgia, hope, and (the editors emphasize) love are some of the principal emotions mentioned, implied, and invoked here.

Among quite a number of personal prose statements written predominantly by women, Caitlin Shetterly’s “Finding Grace in Dark Times” and Hannah Carver’s “Beals Island” seem particularly well-grounded and well-informed on their topics. Shetterly seamlessly connects her personal experience of gardening and parenting with her sense of how to cope with the horrifying facts of climate change: “It is in the human desire ‘to make the world more beautiful’ … that a truly transcendent beauty comes,” she says, altogether authentically and affectively.

Similarly for Carver’s firsthand account of what’s being lost from Maine fishing communities. She weaves together her own story of growing up Downeast with facts about alarming changes already happening along the shore. The future, she says, “terrifies me and other fishermen. Fishing is not a hobby or just a job in our communities. It is a way of life, a heritage. … If we don’t act we are going to lose that heritage.” Heartfelt, urgent, evocative prose.

Some of the poetry in the anthology is blunt to even obtuse, but gems include Marcia F. Brown’s “News of the World,” a deft rendition of the ominous ways events in the outer world infuse and infect the inner psyche, and Jacqueline Moore’s “Last Day in Eden,” about the flight of a hummingbird who takes its “last long sip of soul … / before the slash-burn-slash/turns everything living/into wasteland.”

The book’s middle section comprises color reproductions of visual artworks. As with some of the poems, some of the pieces are clearly targeted to the theme of climate change, while others are not, but instead attach the topic to each work through artists’ statements. Jean Pollard of Winslow offers (in addition to a short poem) “Gaia #14,” an image of a bright blue Earth floating in a cosmos of ghostly bugs, birds, and other creatures, clearly a call to recognize the fragility and diversity of planet Earth.

“Ilex laevigata (male and female)” by Rebecca Goodale of Freeport is a 3D-panels drawing of smooth winterberry bushes whose connection to climate change is not obvious, but the image is sweetly, strikingly presented. You can connect it rationally to climate change if you choose to, but its simple beauty—perhaps in terms Caitlin Shetterly meant—is the real point.

Similarly for “The Burn,” by Robin Gleason, now of the West Coast, a black-lines drawing of a burn scape in British Columbia, and Betty Schopmeyer’s “Forest Pool,” a haunting image of bare winter trees recognizable to anyone, from Thoreau forward, who feels kinships with the Maine woods. Both struck my heart rather than my thoughts about climate change. One connection you might attach, I suppose, is that you would feel lost if these universal images were lost to global warming.

If you are looking, and can see the disaster that’s coming—either somewhat disruptively or catastrophically—then climate change is somewhere between a concern and the brink of panic for you. “By supporting this literary endeavor,” editor Sterling says, “we hope you feel less separate from what’s happening and find power and voice in this truth: there is great love at work in the world.”

Good luck to us all.

A Dangerous New World is available online from Littoral Books. 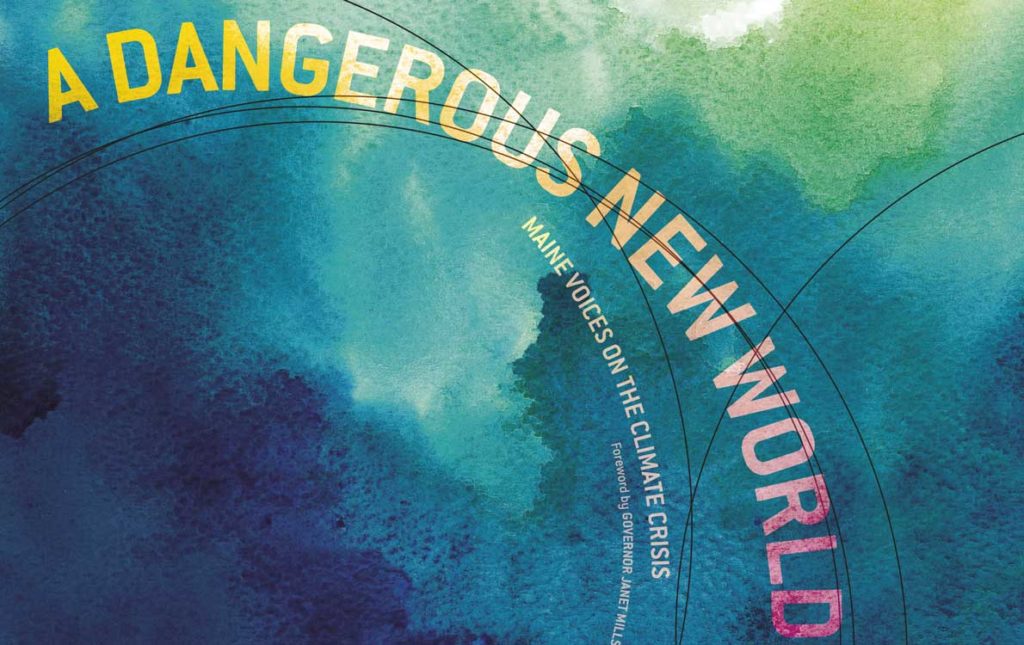