I’m fortunate enough to live (seasonally) in Ontario’s prettiest village, Kagawong, on Manitoulin Island in Lake Huron. I know it’s prettiest because a sign at the top of the hill leading down to the waterfront announced that fact for years. It may seem an outrageous claim—until you turn the corner and start down the hill. Then as the view of the bay opens up, sparkling blue and miles wide, you’re pretty sure the sign had it right.

The lower village, as it’s called, is a quaint relic of a different time. The old mill (pulp for the Sears catalog) is now half village hall, half museum. The empty and decrepit hotel provides echoes of the fascinating time before roads, when visitors arrived by ship.

The little Anglican church, with the prow of a shipwrecked boat for a pulpit, sits at the water’s edge, protected from the waves by a row of boulders. A sandy swimming beach lies between the old mill and the venerable government dock and marina. A long established coffee/confectionery shop lies a few paces from a playground, and from the farmer’s market shelter.

It’s attractive, and though occasionally busy at the height of the season, generally peaceful and a naturally pleasant place to be.

But our pretty village’s biggest attraction, its golden egg, is not the lower part of town but the upper part, where, off a small parking lot, metal stairs lead down a limestone cliff to the pool below a waterfall. Waterfalls are rare natural wonders and apparently attract visitors like bees to honey. Especially in this time of internet travel sites, social media, and things like Airbnb.

Our waterfall has been discovered, and over the past few years the number of visitors has grown exponentially. This year, to levels that some might call craziness.

The province’s Ministry of Transportation has had to safety-cone the nearby bridge to prevent lethal parking. The township has had to build a second, larger lot. And now, joining the fish and chip stand and the ice cream stand are a beauty products shop and a candy store—and other “attractions” are under development.

While the tourists come here to see a natural wonder, they now find themselves part of a throng in what’s become a decidedly unnatural setting. Even down at the pool below the falls the crowd is so large it’s almost impossible to take a decent selfie!

Quite the situation in here Ontario’s prettiest village, but just a small part of a worldwide phenomenon known as overtourism, with places like Venice and Barcelona becoming almost unlivable.

A few days after Labor Day, while paying for a bag of ice and a newspaper at the Esso (across the street from the new parking lot), I overheard a couple of old timers expressing delight at getting their town back. I wanted to join the conversation, but as a seasonal resident, I felt I’d better hold my tongue.

Overtourism is a touchy subject, and a complicated issue. But it’s one that islands, being the pretty places they are, should probably be thinking about.

Oh, and, by the way, I’ve recently heard that the best time to visit waterfalls in February or March—it’s an idea that I think is trending and may go viral. 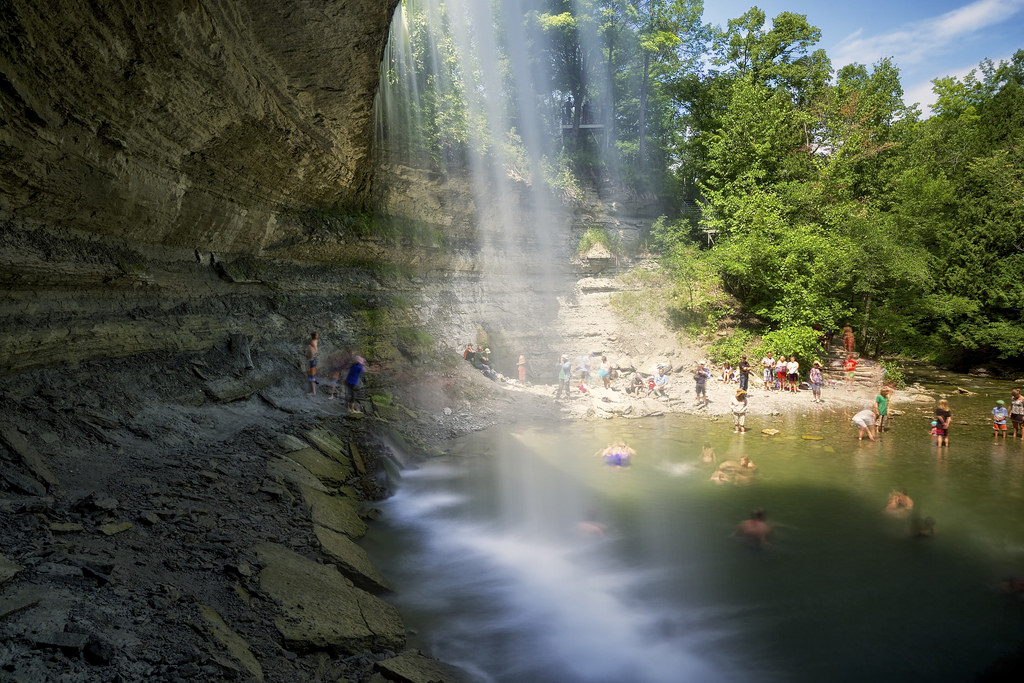