Just about everybody loves chicken. Even vegans love them, although differently than, say, Colonel Sanders, a hawk and probably you and I. In addition to juicy chicken thighs, boneless breasts and eggs, some of us love chicken company and conversation, too, and value chicken capacity to churn compost, forage for dinner, and care for their young.

It has been a fraught year for chicken owners in this neighborhood and elsewhere on the island. Chicken popularity with predators has disrupted flock life here repeatedly. So has finding that two of ten chicks acquired with eggs in mind were the sort that fertilize eggs, not produce them. A reworking of expectations was in order.

My across-the-road neighbors, Nancy and Terry, and I often share chicken orders. We did so this spring with a mix of Aracunas, which lay blue and green eggs, and Black Australorpes, an elegant black-feathered bird with a black beak and feet, which shows gorgeous green highlights in the sun.

The only one left of the three Australorpes I adopted is Mrs. A. She used to be Miss A., but one day I observed her in a nest box with such a maturely serious and steadfast expression that I thought surely she had crossed over to a new station in life, which I honored with a new title.

Her sisters were part of the losses from attacks from hawks, an eagle whose view from a perch in a tall spruce several hundred yards away encompasses our two flocks, plus ducks, several cats and probably small children. An owl tucked into a hen in the neighbor’s yard.

Nancy has seen a weasely little creature which might have been one who stole chickens. There are occasional sightings of a coyote or two, and the occasional dog gallops after the flock, scattering chickens who never show up at home again but whose bodies we discover here and there after the fact.

A Brahma arrived here a few weeks ago, the last of three to survive a mink attack. A young family from down-island whose home is close enough to the shore to be visited by mink, lost two, but rescued one. They brought her to live with us. The poor traumatized creature huddled in a nest box for about a week before she summoned sufficient courage to venture out.

Now Brenda the Brahma, with her feather stockings and lacey patterned grey and white feathers, is one of the most personable birds in the flock. One of the most talkative, she has a lot to say to me when I let everyone out in the morning.

Two Rhode Island Reds, called the Red Heads, and Mrs. A, are the only remaining of the spring chicks. Then we have Brenda and the Salt and Pepper Quartet, and four Barred Rocks that our young friend Dylan located on Craig’s List and fetched from Monroe. One of those, a small, much pecked on and understandably nervous creature, has now filled out, still scurries, but is no longer at the bottom of the order.

To be truthful, I can’t discern who is at top. I suspect Mrs. A. and Brenda have conversations about which of them is in charge, but it hasn’t come to blows.

How different is life among hens than among the chicks who grow up destined for the freezer. For two summers, we have grown meat birds. Then in early October, Nancy, Terry and Kate, a new helper-in-residence, and I use processing equipment owned by another neighbor and work together to kill, scald, pluck, gut and cut up upwards of 30 or more birds.

Mistrustful as I am of cheap, commercial chicken, I am glad to have home-raised meat. I save spare parts, including feet, to make my own chicken stock, leave bones in the breasts to improve flavor, and do honest-to-goodness custom cutting. It is a vast improvement over the chicken that comes with safe-handling instructions all over it as if we were opening a package of grenades with the pins pulled.

These chickens remain unnamed. They are often unappealing birds with only hunger as their chief personality characteristic. Their main predator is we who feed them.

Sometimes I think I ought to keep my chickens in a yard covered with netting or chicken wire. Or perhaps build a really big chicken tractor that I moved daily so they always had new grass and insects. But Mrs. A. and Brenda and their coop-mates like taking dust baths in odd corners of the yard, drinking water from the dishpan at the bottom of the downspout, or best of all, finding wild water in puddles, and patrolling the margins of the property under shrubs and trees.

It is the old problem of freedom or safety, isn’t it? 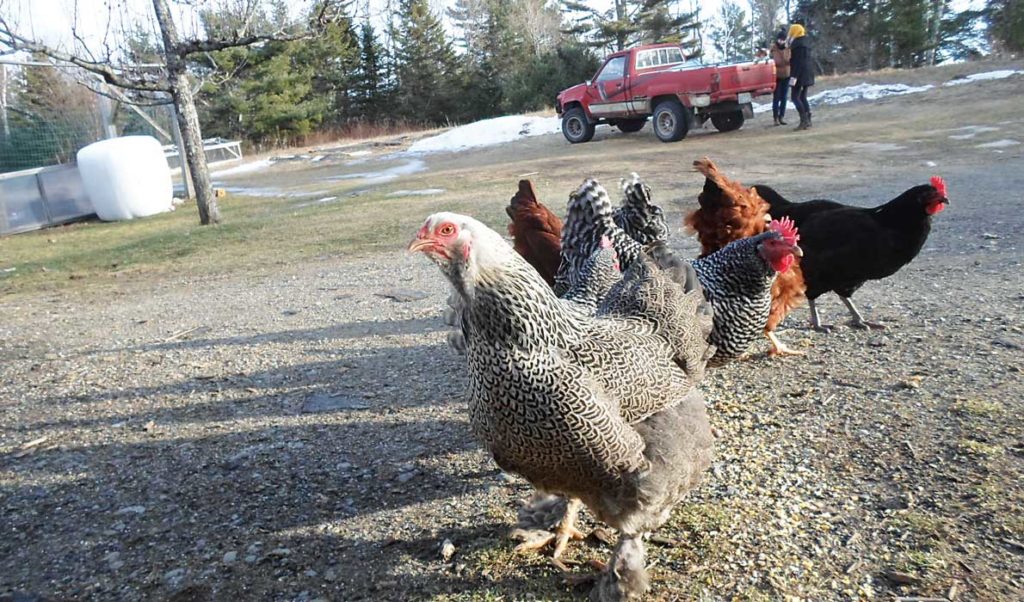