Teenage fishermen know a thing or two about boats, and rightly so. Having spent a majority of their young lives working on them, they are an extension of their identity. The type and size of boat they fish often accompanies their own name when introducing themselves to other fishermen and a fishing vessel’s name is often proudly displayed on one’s ball cap, jacket, truck and sometimes even doodled in class notes.

But despite this strong association, not all young fishermen can draft an industry standard design of their boat. There are, however, a few students at Deer Isle-Stonington High School who in the past few weeks have become a bit more versed in this process.

As part of the high school’s Marine Studies class, participating students have been tasked with drafting and building a boat hull of their own design. Working in groups of four, the boats include displacement hull, planing hull and multi-hull designs. At one hull type per group, the boats will be a maximum of 30 inches in length when finished. The hulls will then be tested for speed and stability while simulating the added weight of lobster traps on deck.

The project, like all work in the Marine Studies class, is interdisciplinary. There is a group of five teachers involved in teaching the class, pulling from topics such as marine technology, math, biology, physics and literature. Because of their work, there are many important topics within each discipline that can now be taught in the guise of various marine related subjects. Encouraged to be involved in the project, I’ve found myself working with students on drafting their designs.

Understanding how a boat should look and act on the water without understanding the minute aspects of it’s design is a lot like playing music by ear; you have a strong and very accurate feel for it, but your understanding of the theory might not transfer to the written version. In this way, working with students on hull design has been a great way to reinforce what they do know while at the same time exposing them to new concepts.

The students began by simply making a few sketches of what they wanted their boats to look like from one specific angle or view. Next, they were walked through the process of drafting that sketch to appropriate length, height and width ratios in three different views with several different waterlines. With designs drafted and the numbers recorded, we then took a day trip to Maine Maritime Academy to transfer the numbers into computer design software so templates of their design could then be cut out.

With so many steps along the way, the students have seen the amount of detail that goes into designing an actual boat hull, and seeing their designs simulated on a computer screen with three dimensional views, they were able to use their knowledge of how a boat should look to reinforce the actual numbers behind its design. With the templates of their design now in hand, the students will next move to cutting the proper dimensions from foam and begin the first stages of assembling their hulls. There are many more steps to be completed before the boats are in the water and being tested, but with the students having the right eye, and now the proper design skills, they are sure to prove seaworthy. 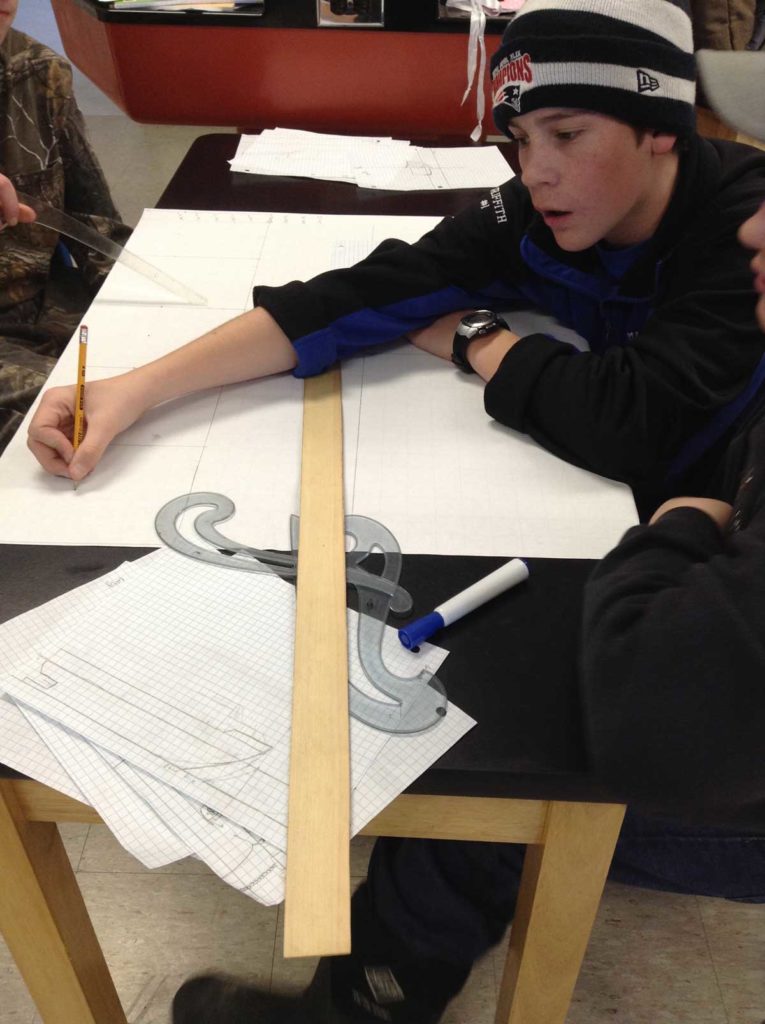