In the cold damp beginning of April, I walked out to check my garden, looking for any signs of life. Where were the snowdrops I planted last fall? I thought they would be up by now.

Still, I know spring is on its way by the activity of the early birds. We saw a few robins that were fooled by our mild weather in February, and now more of their red-breasted relatives have arrived to confirm that spring is coming.

I never noticed it before, but Joy Sprague, our Islesford postmaster, points out: “You can tell that the ground has just thawed out when you see large numbers of gulls and crows in the town field. They’re going after the worms.”

Joy has many kinds of bird feeders near her office window and she’s an empirical source of information about what birds arrive and when. In the first week of April she has already seen yellow-shafted flickers and cowbirds. By the first of May she will be putting out oranges for the Baltimore orioles that always show up for her on Mother’s Day.
“Do you ever see woodcocks in the field near your house?” I asked the other day when I went to mail a package.

“You know, I hear them, but I’ve actually never seen one,” she replied.

The American Woodcock is one of the birds that marks the arrival of spring for my husband Bruce and me. At some point in early April he will say, “We should take a walk after dinner and see if we hear any woodcocks.” They are not easily seen during the day time, as they are so well camouflaged to blend with the dead leaves and grass where they forage for worms.

In A Field Guide to the Birds, Roger Tory Peterson describes them as “a rotund, almost neckless brown bird … near the size of a Bobwhite, with an extremely long bill and large pop eyes.”

Quite a few years ago, we would take walks to the town field in early spring with our young sons to listen for the distinctive nasal “peent” sound that the male woodcock makes to call to females at dusk. When we heard one, we would slowly walk in the direction of the sound to see how close we could get before the bird made his aerial display. He would fly up, making large circles in the sky, his wings making a “chippering trill,” before finally making “kissing noises” and then appearing to fall back to the ground right near the exact spot where he left. It is really quite something to see.

On the day that I noticed my snowdrops had finally popped out of the ground, I called Bruce over to the garden to show him. We startled a woodcock that had blended successfully with last fall’s plant rubble. We were disappointed to have missed a rare chance to watch his daytime antics.

For all the times Bruce has seen them at dusk, he has never seen a woodcock walking about in the daytime. I’ve only seen this action once, and it was more than memorable. They bob and rock up and down with almost every step. Some sources describe this walk as a dance, but I think it looks more like the bird is imitating a “low rider” car bobbing up and down with the aid of hydraulics as it makes its way down streets in Southern California.

With several of Bruce’s family over for dinner that night we described the near miss of seeing the daytime woodcock. No one else had seen one walking so we looked it up on YouTube. Several of the videos had coupled music with the bird’s “dance” but none of them quite matched what I would want to pair with it.

When I sat down to write this morning, I Googled the term “low rider” to make sure my term for the bouncy cars was correct. Not only was it accurate, but in front of me was the exact music I was looking for to further describe the worm hunting movements of the American Woodcock.

For your avian entertainment I suggest you open two YouTube windows on your computer, to play simultaneously. One is the audio version of the song, “Lowrider” by the band War from its 1975 album, Why Can’t We Be Friends? It’s here: www.youtube.com/watch?v=F_iJ28iXwo0

The other is called “Dancing Woodcock in East Machias ME (Published in October 2015 on YouTube by Bryan Albee): www.youtube.com/watch?v=EV2-ZCpoLi4

Watch the woodcock video with the sound off while “Lowrider” is playing in the background. These two videos were made for each other.
Isn’t it nice that while we are waiting for the warblers to arrive in May, we still have the chance to be entertained and reassured about spring by the early birds who are getting the worms? 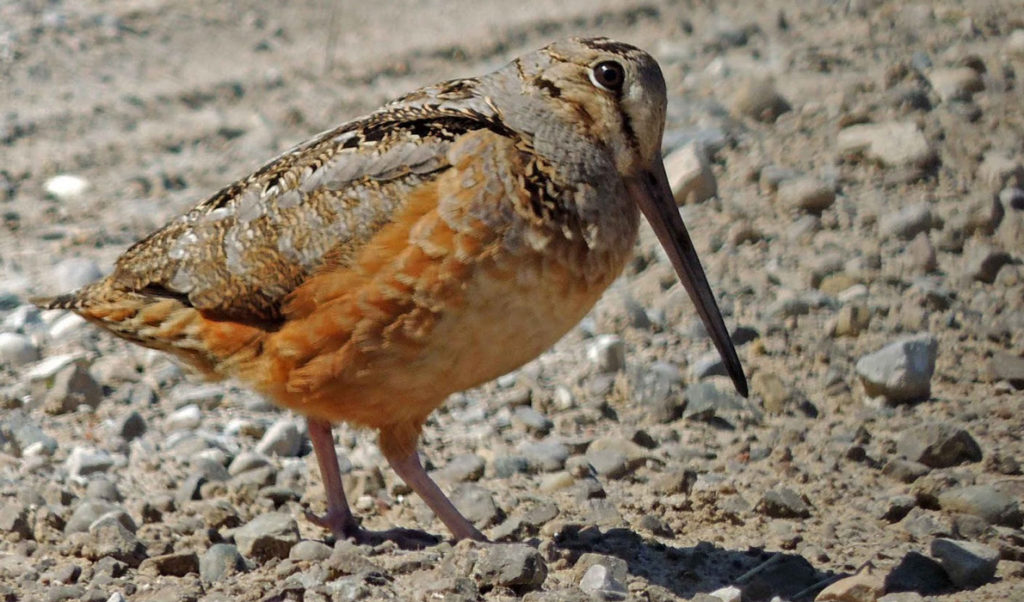