Ever wonder how the National Weather Service (NWS) is able to report detailed weather data for your local area? Across the country, there are over 8,700 volunteer NWS cooperative weather observers who are truly the nation’s weather and climate observing network of, for, and by the people.

The NWS in Gray manages 99 volunteer weather observers across New Hampshire and Western and Southern Maine who record maximum and minimum temperatures, rainfall, snowfall and snow depth readings from equipment provided by the service. NWS also has over 2,200 volunteer weather spotters who report based on event-driven criteria, such as total snowfall from a storm.

The weather observers and spotters all have their own stories for why they volunteer to provide weather reports. In Port Clyde, Paul Dalrymple is a NWS weather observer who has reported daily observations from his home for the last 26 years.

Dalrymple volunteered to continue the observation history of Port Clyde after the Marshall Point Light ended its collection of weather data, he said, because he did not want to see the long-standing climate record end. His grandfather, Charles C. Skinner, was a light keeper at Marshall Point Light for 44 years (from 1874-1919).

Dalrymple is a Port Clyde native, but he grew up in Massachusetts. He never lost his ties to Maine because his family would visit his grandparents on Marshall Point throughout his childhood.

An interest in meteorology and oceanography led him to several jobs:   the Blue Hill Meteorological Observatory in Milton, Mass., 1949-1951;  Mt. Washington Observatory, N.H., during the summer of 1949; and working on research ships in the North Atlantic for Woods Hole Oceanographic Institute and the US Weather Bureau from 1951-1954.  After his time at sea, Dalrymple became a geographer and climatologist for the U.S. Army Quartermaster Corps and Corps of Engineers from 1954-1986.

In 1957-1959, he jumped at the opportunity to work in Antarctica for the International Geophysical Year in Little America V and the South Pole, fulfilling a lifelong dream.  While in Antarctica, Dalrymple took micrometeorology wind and temperature measurements for the “near surface” to help lead to a better understanding of the atmosphere over Antarctica. The analysis of his South Pole micrometeorology measurements allowed him to obtain his doctorate. He was also honored for all his work in Antarctica by having a mountain named after him, Mount Dalrymple, in West Antarctica (Latitude 77°57’S and Longitude 86°05’ W).

Over the years, he has been involved in numerous other endeavors:  glacial research in Greenland in 1963, guide on 25 Antarctic cruises in the 1990s, and editor of The Antarctican Society Newsletter for 35 years.  Even today, his observations are still instrumental in maintaining the climate of his local area and for research. The NWS in Gray is appreciative of his time and dedication to reporting the weather in Port Clyde. 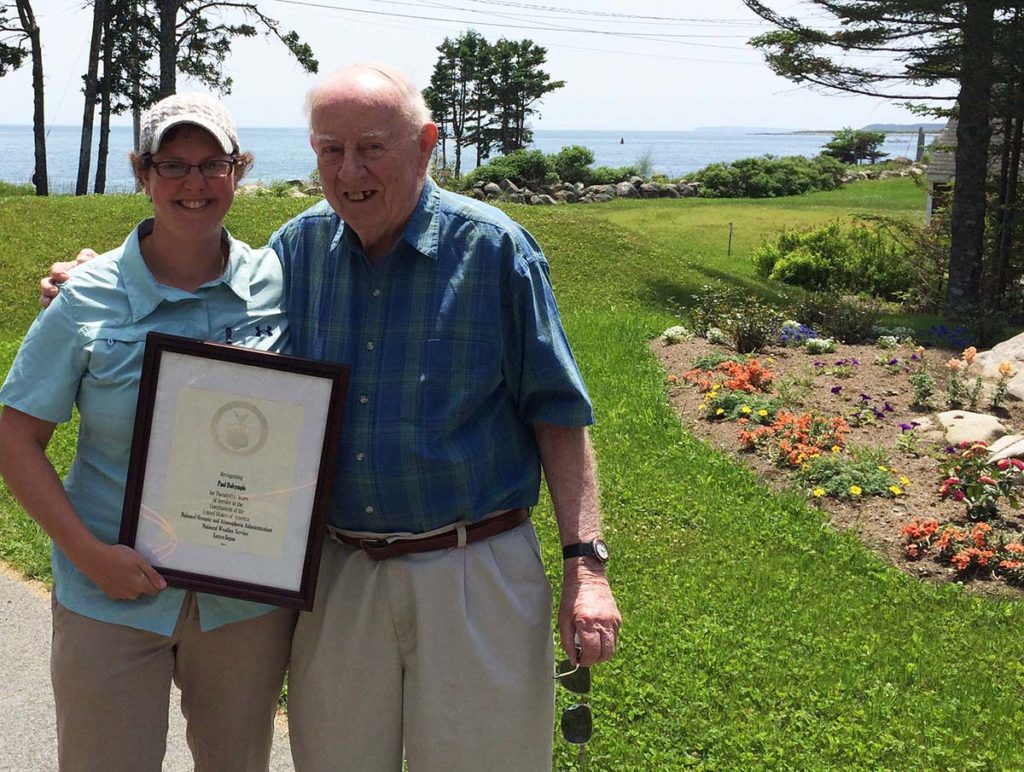