PORTLAND — Some good news, some worrisome signs sums up the findings of a long-term comprehensive study of water quality in Casco Bay conducted by the Friends of Casco Bay.

The nonprofit group unveiled its report “A Changing Casco Bay” at the Ocean Gateway on April 28.

“We get asked a lot, what is the health of the bay?” said Cathy Ramsdell, executive director of the group. “Only 60 percent of the sites studied are in fair to poor quality,” she said.

“Generally speaking, the bay is in good shape,” added Mike Doan, a research associate with the group.

The top concern is runoff from homes, businesses and streets.

After a heavy rain, the report states, “Millions of gallons of raw sewage, industrial wastes, fertilizers and pet wastes from yards, oil slicks from city streets and toxins from tailpipes and smokestacks are flushed into Casco Bay.”

Indicators of the health of the bay include nitrogen concentrations and pH, or the level of acidity, and both were examined.

The quality of the water was higher for samples taken farther from shore, and the only sites rated “poor” were at the origins of rivers or at the shore. A map that included water quality monitoring sites showed “poor” quality at sites at the origins of the Fore, Cousins and Harraseeket rivers and at Peabbles Cove near Cape Elizabeth and at the New Meadows “Lake,” a man-made tidal impoundment area north of Bath.

Among the top concerns were what Doan called “nuisance blooms,” the green slime often observed after a heavy rain storm, and acidification, the result of increased carbon absorption.

“Our muds, our clam flats are becoming too acidic,” Doan said. Shellfish such as clams exhibit shell pitting or, worse, the shells are too thin for the organism to be viable.

The algae blooms are caused by nitrogen in the water, the result of fertilizers used on lawns that wash into streets, down storm drains and finally into the bay.

Several speakers at the press conference supported the report and the effort to monitor the bay.

Rick Frantz and Jennifer Fox, residents of Great Diamond Island and owners of Andy’s Old Port Pub on the city waterfront, said they are keenly aware of the bay’s health.

“We spend about an hour a day on the water,” Frantz said, traveling back and forth from their island home. He described water that was “coffee-colored” after heavy rain, the evidence of run-off.

The health of the bay is important for both tourism and fishing, he said.

“This is a working harbor,” Frantz said, “not just a pretty face.”

Fox echoed this observation, saying that while “you can’t see nitrogen in the water,” its affects are visible in the algae blooms. The couple’s pub is impacted by limits on the seafood it serves, she continued.

In the last three years, shrimp seasons were curtailed or eliminated, and scallop seasons have been shortened, Fox said, impacting their ability to buy fresh, local seafood for the pub.

In addition, when the couple bought the pub eight years ago, many of the customers were fishermen; there are far fewer today, she said, evidence of changing conditions in the marine environment.

“Everyone of us in Portland can have an impact on having the bay more healthy,” Fox concluded.

Also speaking in support of the report was Olympic marathon runner Joan Benoit Samuelson. She currently lives in Freeport on tidal land, she said, and summered as a child on Cliff Island.

“This place is a jewel. It’s a beautiful resource,” she said.

“There’s a lot of tangible evidence of climate change out there,” Samuelson said. “The time to take action is now.”

Noting that the shores of Casco Bay make up 3 percent of the state’s land mass, yet one-fifth of its population lives there, Ramsdell stressed that the bay’s health should be of great concern.

“We have to take care of this place,” she said. 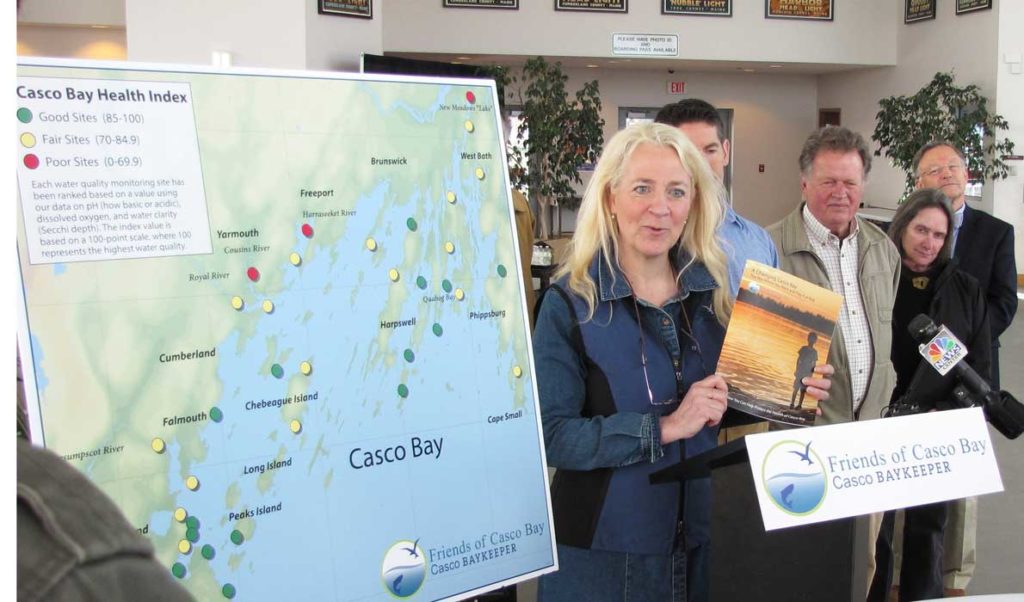